More than mere forums to share gripes about uni life, the UK’s various uni Facebook confessions pages have come to channel the spirit of the students themselves.

But which is the best in the land? It’s down to you to vote. Let’s look at the contenders.

Bristol uni’s confessions page has 20k Facebook likes and plenty to show for it. The page helped to raise £1,500 to send a uni cleaner on holiday to Jamaica, but its finest hour came when a rival club tried to impersonate the official “Bristruths Birthday Bash” club night with a “Bristol Truths” event on the same night.

Leeds students have flocked to their confessions page to the tune of 26k Facebook likes. However, its defining characteristic seems to be dunking on how boring the Oxbridge pages are. 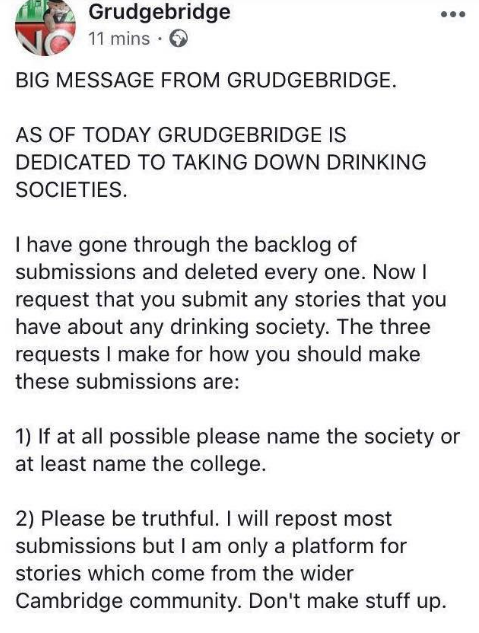 Not prone to exaggeration, pundits (opinionated Cambridge students) branded it “Cambridge’s #MeToo moment” and an “online fatwa”, and the controversy consumed the page.

With 10.5k likes, Camfess serves those bereaved by Grudgebridge adequately, if not as sensationally.

Newfess is the place where 9.8k Newcastle students can get together and moan about the trials and tribulations of being an absolute rah. The page’s admins recently announced they’d stop publishing people’s political posts because of the severe lack of vibe.

18.3k students like Sheffield’s confessions page, and it’s thoroughly surprising how few posts are about the Arctic Monkeys.

You only need to know one thing here: most of the posts on Oxford’s splintered confessions page scene are multi-paragraph. 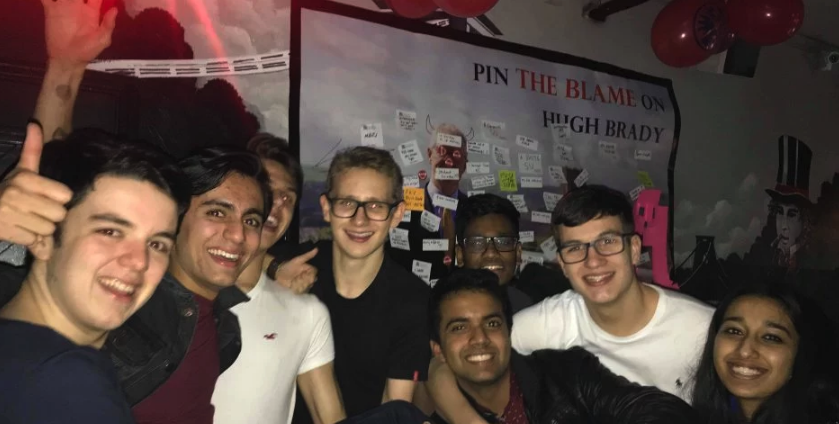 Bristruths actually managed to pack a club out

Springing up in the wake of the Exehonestly scandal, Exefess has racked up 4.4k likes as it attempts to keep its hands clean.

Exehonestly was shut down after it accidentally let some Nazi propaganda through the net and the uni reported it to the police hate crime unit. Despite over 90 per cent of Exeter students against the page shutting down, the admins decided to get out and close it down. What a way to go.

It’s got 11.5 likes and is just there in the same way Birmingham uni is.

Racking up 17k likes whilst passing up the obvious pub is genuinely impressive. You’ve got people besmirching the good name of portmanteaus with things like “Exefess”, yet somehow “Cardiffessions” is somehow out of reach. It’s that pioneering spirit which landed you at Cardiff.

As much of a vibe as Sussex Uni.

On its journey to 17.6k Facebook likes, Durham’s Durfess has been no stranger to controversy. In 2018, the page’s “college war” series – where Durham’s colleges were pitted against each other in a angry/sad/like react popularity contest – descended into scandal. “Van Mildert accused of ‘undermining democracy’ after Brazillian bot Durfess cheating scandal” read the headlines, as 40 per cent of one college’s voted came from an unidentified group of Brazilians. 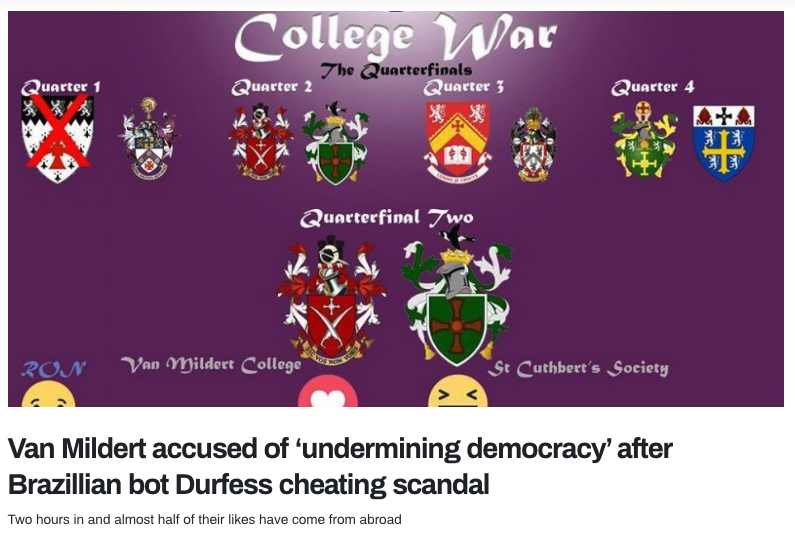 If you ever wanted to realise how much more fun uni is in Belfast, check out QUBLove.

The Edinburgh student body, dotted with random minor royals, is beyond parody. To prove that’s never been in doubt, look at this picture of a Yoga mat discarded in a supermarket.

One of Lancaster’s three confessions pages, it’s not clear what sets Lancsfess apart. But it does have loyal fans.

At pains to stress it is in NO WAY affiliated with the uni, Lancsfessions’ admins have presumably been on the sharp end of a curt email or two from an irate uni apparatchik.

The best name, for sure, but can the page win out in a crowded Lancaster field?

Rarely is being on Facebook more fun than the overall uni experience. York’s Yorfess is that exception.

King’s College London’s confessions page occupies its time with many things, but only truly comes alive for one: dunking on UCL.

#KissCollegeLondon16116KCL: We compete with UCL at the highest levels of Sport, Academia and Research with pride and respect for our opponentsAlso KCL:

It’s the same for UCLove, except crucially these guys have twice as many likes as their London rivals.

Despite a name which sounds like an ailment, Liverfess can conjure up the odd flash of banter.

So the joke here is that UEA’s campus is made from an unholy amount of concrete. Frankly, with a name harking back to the rhyming meme pages of yore, how can you resist?

Just ticking along with 4.2k likes, Aberdream is a window into another world. The Granite city, the Lands of Always Winter – few can imagine life in Aberdeen.

Don’t give Manchester students the satisfaction of winning.

• Students are using confessions pages to talk about suicide, and nobody knows what to do

• Here’s what it was like inside the Bristruths Birthday Bash