After all that blackmail, murder, cheating and lying you wouldn’t have thought there would be any room for The Stranger memes. But ofc people have meme’d one of the darkest shows to come on Netflix. I mean if other creepy show You season two is getting meme’d, there’s gonna be The Stranger memes.

The Stranger ending has left people wondering if there’s going to be a The Stranger season two, with the writer of the novel and series Harlan Coben confirming there are no plans just yet for a second series on Netflix. In an interview, he said the whole book would be wrapped up in one season, adding: “I don’t think it’s fair to ask people to watch an eight-episode crime story like this and not give you the ending, and make you wait for Season 2. That’s just not fair to me.”

To be honest, from these The Stranger memes and reactions, it seems like people found Netflix’s The Stranger season one confusing enough.

1. I feel you Brenda

It’s been days since I finished watching The Stranger on Netflix but all I can keep thinking is what an absolute dish Richard Armitage is ?‍♂️?? pic.twitter.com/cEClLHUEI1

3. She really could be Joe from You’s sister

It's really amazing that, with The Stranger, Netflix has doubled its content about baseball capped lurkers with amazing bone structure. pic.twitter.com/Gwx6KNMlPG

4. Accurate portrayal of my brain

Literally anyone who’s seen #TheStranger, trying to explain it to those who haven’t. pic.twitter.com/fMDDXKeCZn

If you haven't seen this new show #TheStranger on Netflix, you have to check it out. Brilliant!

Me binge watching #thestrangernetflix #TheStranger trying to figure out how all these people are involved with each other. ? pic.twitter.com/1isniw4GgJ

7. I have some QUESTIONS

Watching the last episode of the stranger Netflix like pic.twitter.com/WVvuIb3dwo

When Johanna put her phone on loud speaker while being next to Katz #TheStranger pic.twitter.com/VbYAm1Do7i

#TheStranger was so so good! ??

But the biggest mystery is how can they all afford to live in those big ass houses! ?

The majority of them were teachers and police…

Only 2 episodes in and it’s freaking me out #TheStranger pic.twitter.com/PGOc0wNXyV

12. The Stranger will be my sleep paralysis yay!

OMG IM WATCHING THE STRANGER AND IM SO ANXIOUS! I WONT BE ABLE TO SLEEP! OMG#TheStranger pic.twitter.com/2PlHcy189r

13. I’m rewinding to the beginning

14. Wow I cannot unsee this

5 episodes in and really enjoying it, but can’t believe that Mike isn’t in any way related to Donald from Benidorm. #thestranger pic.twitter.com/7ijFeooYKP

Me viewing #TheStranger summed up in one gif! Christ well and truly GRIPPED whole way through! pic.twitter.com/c0rnto466M

that netflix series ‘the stranger’ is fuckin nuts

Fucking hell The Stranger on netflix is just twist central eh. Theres a twist there, big twist here, wee twist there, the twist by chubby checker there, mate its just full of twists its actually hurting my neck?????decent though am watching it n a like it. See yehs aw later 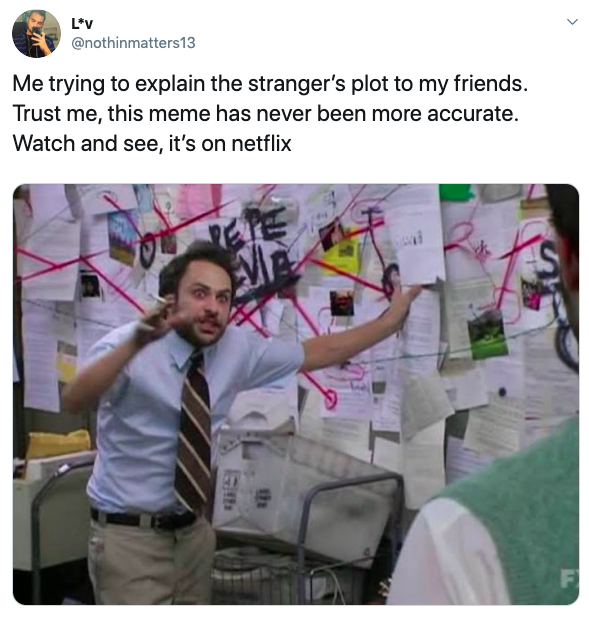 Helpful comment from Auntie tonight while watching #TheStranger which has TOTALLY unpicked the whole complicated plot for me: “They got that peg bag in Dunelm.” pic.twitter.com/n8ItCXzlCP

I want to watch all the family funny video in Adam Price's laptop! #TheStranger pic.twitter.com/rtcPomfQ7q

#TheStranger is amazing but my face has been like this for the last 8 hours pic.twitter.com/5PgVZqux6X

• Everything we know about Netflix’s The Stranger season two