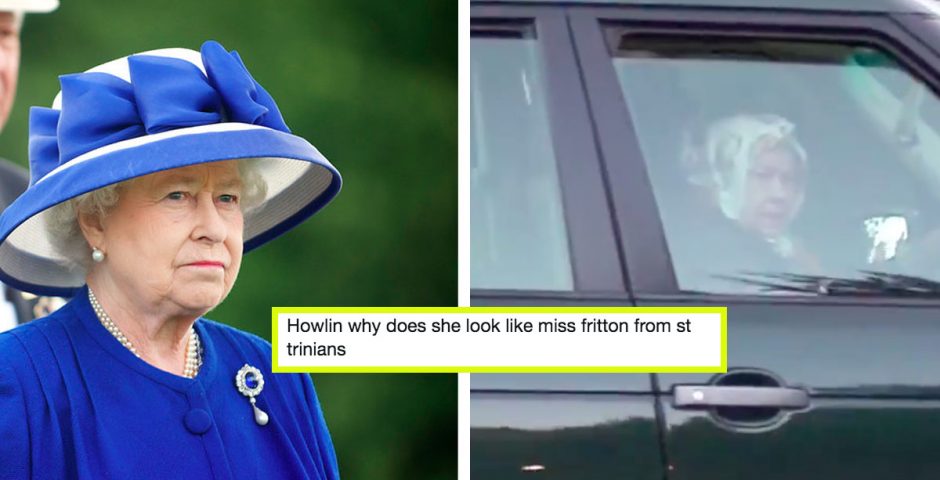 In amongst the chaos of Megxit, the Queen went out for a quick drive. She was spotted driving a Range Rover, reportedly without a seatbelt on, wearing a dog print head scarf and was filmed staring at the press as she drove by them. And it’s created loads of great memes.

Her outing came a few days after Prince Harry and Meghan Markle announced they were stepping back from their royal duties. The pair had not told the Queen of their plans and it was reported she found out mere moments before the decision was announced and followed the coverage on the news.

In their statement the couple said they would still support the Queen, however the Queen is apparently disappointed and sad about their decision. Today Prince Harry is having a sit down meeting with the Queen, Prince Charles and Prince William to discuss his and Meghan’s future.

The Queen’s drive was her first appearance since the announcement and her stony face and hard stare is telling of her feelings towards the whole situation. Naturally Twitter is more interested in learning the Queen can actually drive and WITHOUT a seat belt than about Megxit.

Here are the best memes reacting to Liz getting behind the wheel:

Is that the fucking Queen driving a Rover?!?! https://t.co/gx6KH9sExC

Sounds like she got a fire playlist going pic.twitter.com/OuyNkbZGVb

3. On the lookout for exiting Royals

Why’s the queen still driving at like 100 years old and listening to this ? ?? pic.twitter.com/fM7hBfawjV

Queen is driving around in a range at 93 giving off death stares. The gaffer https://t.co/XpmMBg0TY8

this is how guys drive by you when they see you’re a woman driving https://t.co/AtndcS5lmM

8. No nuggets for Liz

Pulling up to the drive thru at 3am and it’s closed https://t.co/wH5vIyr9zU

Queen Elizabeth driving a range rover wearing a headscarf of dogs on it. Can you say legend pic.twitter.com/imKhMVf7Pq

Imagine you are walking on the street. Suddenly, you hear a roaring engine. A Range Rover starts to run you down. You start to sprint, turning back to see who it is driving. It is her Majesty Queen Elizabeth II, with rage in her eyes.pic.twitter.com/wUh9dH5dbu

12. Literally don’t have one

Queen's driving at 93, what's your excuse?

why does the queen driving always look like she’s about to run over someone on purpose HELP pic.twitter.com/aKtMigFBK8

Can’t get over the Queen driving about as if she’s in Top Boy. https://t.co/19JYUkRGZ7

Just saw footage of the Queen driving and they blurred out the plates, presumably so viewers don’t ID her and find out where she lives.

Bro even the queen wacks the AUX cable in whilst driving at 93 years old pic.twitter.com/6plVxY0OI6

Charles will never be king. This woman still drives herself in a four by four. It’s late. https://t.co/ihtCkhBHi0

19. She will live forever

The Queen is 93 and is still whizzing in a bussdown. You people cant tell me they’re not giving her new organs every six months https://t.co/sh8ZOItX8n

20. The only two things worth mentioning

21. This user really out here trying to get the Queen arrested

Not wearing a seatbelt @metpoliceuk https://t.co/NNhZh0vtsT

Me driving around the block to see what the gas prices are so we can beat their prices by 0.01 cent https://t.co/UKYfrmetI9

uh oh looks like the Palace have despatched their elite force to hunt down Harry and Meghan pic.twitter.com/IwvCP4FWhD

in the crown whenever the queen got bad news she hopped in her car to go hunting or see horses. like they really didn’t make shit up https://t.co/2LUKnYEja5

Me driving past my old high school when I’m home for Christmas https://t.co/OaFYBtowaZ

•The Queen is fine, but here are the 37 best memes about her hoax death