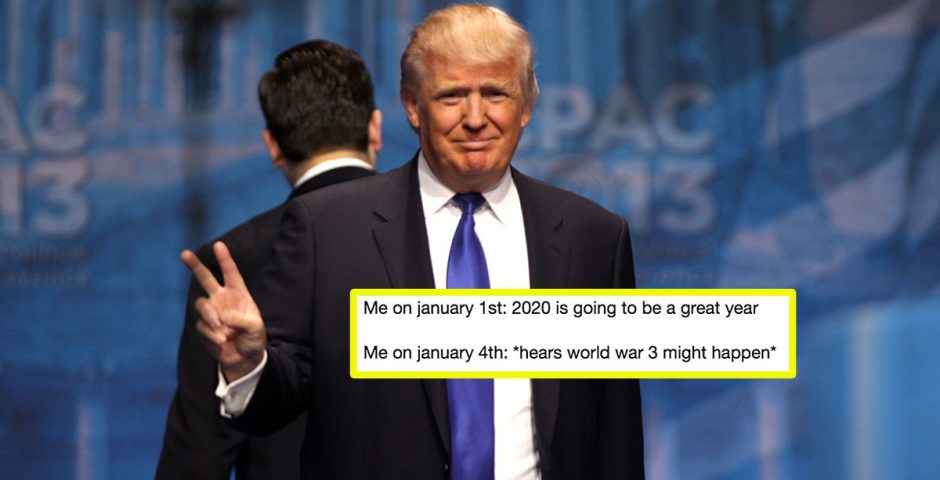 In case you’ve been living under a rock, Donald Trump ordered an air strike on Iran on Friday, that killed Iran’s General Qassem Soleimani and Iran have threatened to strike back against the US, and now WW3 memes are a thing.

These decisions have led many people on Twitter to believe that we are heading to World War three. And of course there are many memes to get us through this troubling political time.

Some Twitter users have criticised the creations of these memes, stating that war is not funny and has serious consequences.

Obviously it is a very serious issue but people on the Internet have decided to make the best out of a bad situation and bless us all with some quality memes to get us through the day.

We’ve rounded up the best memes that are essentially the best coping mechanism for dealing with a potential global catastrophe.

These are the best WW3 memes:

Me n my friends during the war that somehow fucked up the one job they gave us #ww3memes pic.twitter.com/xpZdIZEUds

2. The plan is not working

When you're playing dead and the Iran soilder say “Shoot everyone again”.#ww3memes pic.twitter.com/UhoAfFdM51

me and the girls when we steal a tank in ww3 #ww3memes pic.twitter.com/0bIfeQcHGg

4. This will defo work

The perfect time to use your uno reverse card is when you get drafted for WWIII try draft me now bitch #ww3memes pic.twitter.com/4Nb8D4wfzC

Me telling my kids how it began.
And this is how it all started kids… #WWIII #ww3memes pic.twitter.com/BGVgn1cVaC

6. She will out live us all

History teachers when they find out they have to teach about another war #WorldWarIII #ww3memes pic.twitter.com/Y9j1iJ0bDk

When you walk into your sons room in 2040 and he’s on his PS7 playing Call of duty ww3 #ww3memes #WWIIImemes
Follow me. pic.twitter.com/ZqcZHfPapd

9. At least there are some perks of WW3

When you realize that you’ll be getting a new COD after this war #ww3memes pic.twitter.com/maI5MVptc3

Me on january 4th: *hears world war 3 might happen*#WW3 pic.twitter.com/j1m6shVA1n

11. WW3 memes are my only survival technique

me: this isn't a joke. we shouldn't be joking about this

also me: it's a coping mechanism and the memes do be funny ? #ww3 pic.twitter.com/pi6DNgqst8

Me calling my mom to pick me up cause my captain yelled at me #WW3 pic.twitter.com/SSlSQquGpL

Me explaining to Iran that I don’t have any problems with them and my beef is with America too pic.twitter.com/xHtI7Kh4iq

All that time I spent on call of duty just to be told THERES no respawning in the actual war… ridiculous #WorldWarThree pic.twitter.com/Ru48M30Tds

me laughing at me when I#WWIII memes actually get
drafted pic.twitter.com/LstRM97d6K

Me meeting my homies in prison after we all refused the draft for WWIII pic.twitter.com/VmV2gbbgT2

Everyone with asthma who can’t be drafted for World War III pic.twitter.com/MrKQpTIYEd

so if the LGBTQ isn’t welcomed in the military, we shouldn’t get drafted RIGHT? pic.twitter.com/HZPdBOeu2Z

19. Hitting far too close to home

Me laughing at these World War 3 memes knowing this shit might happen #WWIII pic.twitter.com/d3upGxAIEt

Me: laughing at #WW3 memes
Also me: realising it is the last meme… pic.twitter.com/cAvt55akh5

All the Karens pullin up to Iran #WW3 pic.twitter.com/pQYX9q1Q5M

#WW3 Realizing Iran and Russia are allies.Russia and China are close and we owe China money ??‍♂️ pic.twitter.com/bhdPeI2Kjx

Me going to bed after making memes about Iran and not taking them seriously #WW3 pic.twitter.com/lmMs4Sx6S9

24. Goodbye to all those aspirations

#WWIII #WW3 GEN Z’s: “OMG CRAZY THIS IS THE DECADE WHERE WE GET MARRIED AND HAVE A FAMILY OF OUR OWN”

25. I can’t handle the pressure ok

When I get placed as an undercover agent in World War 3 and the enemy asks me if I’m a spy #WW3
pic.twitter.com/SaHDYbnI8k

change your twitter bio's to make sure you are safe for the draft#WW3 pic.twitter.com/4xo4PqbSc7

They Can’t Draft Me For World War 3 if they Can’t See Me #WWIII #WW3 pic.twitter.com/ZKqnHACGBa

When they corner me in Iran #WW3 pic.twitter.com/aor9V7cxru

When the US government asks for my birth certificate so they can draft me for #WW3 pic.twitter.com/fgp1lrhbPz

30. Definitely not doing that dissertation now, thanks WW3 memes

so if world war three starting are my assignments still due #ww3 pic.twitter.com/Nxugrmxrl5

•The votes are in: This is officially the best meme of the entire decade

•These 29 hilarious general election memes will get you through today

•The Queen is fine, but here are the 37 best memes about her hoax death