Peter Andre has called for Stormzy and Wiley to end their beef and honestly thank god, cause I don’t know how else it would be resolved.

Peter went on Twitter yesterday to address both of them to say end the drama and stop dragging each other’s families.

He tweeted: “@WileyUpdates & @Stormzy1 If you don’t like each other take it to each other, don’t bring each other’s families into it man, C’mon you both know that ain’t right. You’re both incredible artists.”

Tbf the feud has been going on throughout the first 10 days of 2020 and maybe Peter thought he was the one to stop it?

Stormzy and Wiley reignited their 2019 argument over Ed Sheeran on New Year’s day. Initially they were just tweeting each other and calling each other different names like “dinosaur”, “fossil”, “prick”. Yeah real inventive.

Wiley then escalated it by releasing a diss track and Stormzy responded with the diss track ‘Disappointed’. Both these songs were pretty savage, but it hadn’t got that personal, until Wiley decided to release a second track and go in on Stormzy’s mum saying he was going “to rip that weave off her head”. Classy guy.

Stormzy then released ‘Still Disappointed’ and produced some iconic takedowns of Wiley. He dissed Wiley’s treatment of leaving his own mother in Cyrpus, called his sister a “little bitch” and said there were no “real men” in his family.

And this is when Peter Andre just couldn’t sit still and let it happen, he just had to step in and be the peacemaker. What made his tweet even better was he didn’t even tweet the right Stormzy and Wiley.

Twitter DRAGGED his attempt at trying to end the feud.

Good morning to everyone except Peter Andre. pic.twitter.com/FsZWqWGQzB

Stormzy and Wiley: *write diss tracks about each other and each other’s mums*

Peter Andre: *begs them to stop in a tweet while tagging the wrong accounts*

This is not Neighbours pal

Peter Andre believing he can be the one to squash grime beef is the level of confidence I aspire to reach. https://t.co/iUdTtjrDYA

Peter deleted his tweet after all the savage replies came for him and this morning addressed his peacemaking abilities, saying he expressed his opinion pre coffee and defended his use of the wrong accounts. He tweeted: “Oh shit. I asked for that don’t mind me guys, that was pre coffee yesterday morning @Stormzy1 @WileyUpdates. Ps the reason it tags wrong on Twitter is because I link it from my Instagram which uses the correct…” 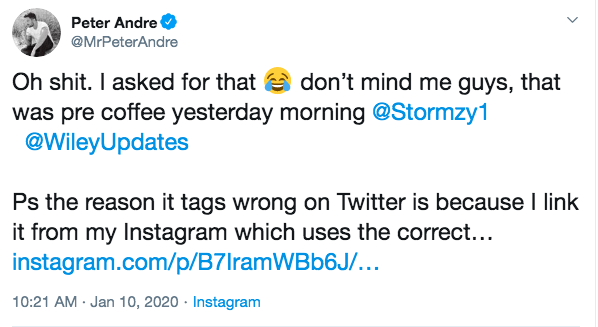 Unfortunately neither Stormzy or Wiley have commented on Peter’s intervention.