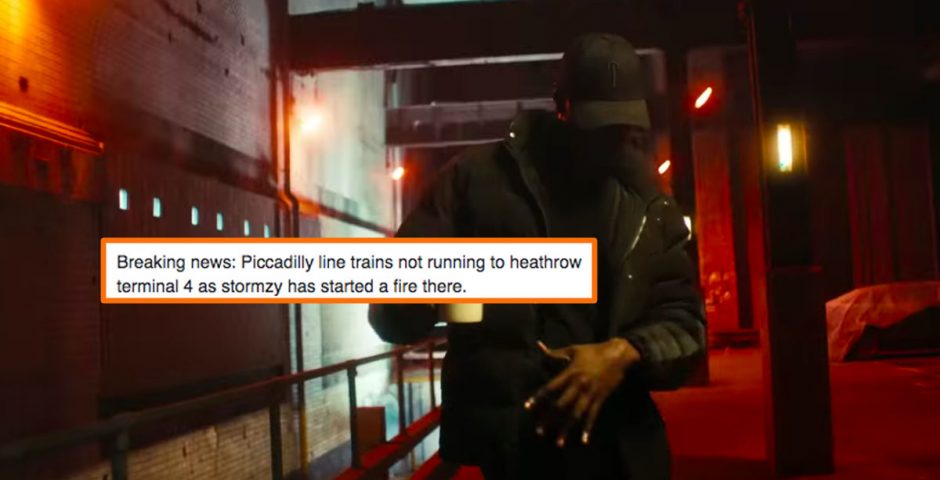 The Stormzy vs Wiley beef is heating up every day and the latest diss has created some savage memes.

The two started their feud on Twitter on New Year’s day over a series of tweets about Stormzy working with Ed Sheeran, who Wiley believes is just using grime to look good.

Stormzy called Wiley a “dinosaur”, a “fossil”, a “weirdo” and a “prick”. Stormzy also went on Radio 1 and said Wiley was like a ‘drunk uncle’ and that’s when it started to get serious.

Wiley released a diss track and Stormzy responded casually bringing Wiley down whilst nursing a brew.

Wiley THEN went in on Stormzy’s mum in his next track saying he was going to “rip that weave off her head”.

Last night Stormzy released ‘Still Disappointed’ and fully attacked Wiley’s supposed treatment of his own mother. Stormzy dissed Wiley on leaving his mum in Cyprus and wanted to start a petition to bring her back. He also called Wiley’s sister a “little bitch” and said there where “no real men in Wiley’s family”.

The pair basically took over Twitter and were trending even more than Megan and Harry stepping down from the Royal family. The Stormzy vs Wiley feud has blessed the internet with loads of savage memes.

Here are the 21 most iconic Stormzy Wiley memes:

Stormzy really said “broken woman I wanna mend her, break her back and then bend her” about Wiley’s mum!! pic.twitter.com/19Kel4F4H4

Stormzy casually sipping tea with a spliff in his hand whilst fucking Wiley’s career up . Fucking KING of grime #WileyvsStormzy pic.twitter.com/81EJKgdXYM

Wiley and his producer after that Stormzy diss pic.twitter.com/qlIsIpagNk

5. Stormzy and Wiley are just the warm up

Round 3 Stormzy and Wileys mums go head to head, sending passive aggressive emails via their iPads

6. The biggest round of “your mum” the internet has ever seen

7. What a time to British

These Americans ?????? I cant even #Stormzy pic.twitter.com/fgEYVA3pED

The way that Stormzy, not only bodied Wiley in both his diss tracks, but came up with TWO visuals. THEN, got Terminal 4 trending, BLEW A RASBERRY AND THEN gave him 24 hours to reply?
Sorry Wiley, but it's time to ring the hospice.#StillDisappointed

Wiley coming to reply to the diss after stormzy dashed through his whole family #stilldisappointed pic.twitter.com/7SUanmGF4m

11. Oh yeah he fucking went there

Stormzy said ‘broken woman I wanna mend her, break her back and then bend her’ about Wiley’s mum pic.twitter.com/smlKzaTajd

Nobody:
Stormzy at Wiley’s mum: pic.twitter.com/AsiZaxzmZq

Take me back to London – Stormzy ft Wiley’s Mum

Meanwhile in the UK: #WileyvsStormzy

17. You lower the bar when you bring the mums in

Stormzy: I slapped your brother infront of your dad and he did nothing, your dads a pussy

Twitter: Nah whys Wiley bringing family into this for?! uncalled for #WileyvsStormzy

18. Wiley trying to cut us all deep

Wiley: “Go beat your jawns on tour but Michael Mayas not your girl anymore”#WileyvsStormzy pic.twitter.com/r9tNzJ7j2c

how have we had, the pope smack, sharon thunberg, wax nicki minaj, an iranian crisis, alan johnson as the masked singer, stormzy vs wiley and megxit after only a week of 2020

“if I see your mom down Croydon market, I’m gonna rip that weave off her head.” https://t.co/l6qX4f9PXZ pic.twitter.com/noc9SGUIx7

Breaking news: Piccadilly line trains not running to heathrow terminal 4 as stormzy has started a fire there. https://t.co/ZS8UUcN8K9