But who is Raff Law? Meet the 23-year-old starlet:

Rafferty Law is the son of Jude Law and Sadie Frost

The bestest of times celebrating my dads birthday 🍰 taquillllaa

Not to labour a point, but they really do look identical. He’s one of three Law/Frost kids, along with brother Rudy and sister Iris.

Raff, for short, sings and plays guitar in a band

@mulberryengland event on Tuesday was highhhh on energy. Gonna match it tonight. Pull up at the Amersham arms for 830 let’s go people

Damon Albarn’s son is the drummer in their band, Outer Stella Overdrive.

Rafferty Law is also an actor, and will be starring as Oliver Twist on TV next year

This actually sounds quite weird: A “street” Sky remake of Oliver Twist with Rita Ora as the Artful Dodger, Michael Caine as Fagin, and Raff as Oliver.

It’s been filming in Bethnal Green, and Raff revealed that he took up boxing and parkour to get in shape.

He’s dating Rita Ora after thing “hotted up between scenes”

Raffy and Rita have been dating for a few weeks, according to The Sun. They were spotted holding hands after the British Fashion Awards this week.

everyone wondering about these pictures and the only thing i'm asking myself is .. (swipe): how is @ritaora not freezing her feet? 🥶 – Be happy babe, no matter what ❤️ . . #ritaora #ritabots #raffertylaw #twist #rafflaw #roararepublic 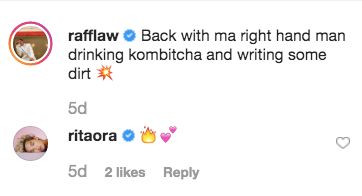 A source tells The Sun: “People made a few comments about the chemistry straight away and the gossip started from there. But it was only after a while that the attraction really grew into something meaningful between them.”

What’s that I hear? @outerstellaoverdrive have released their latest single. Noooooo way! How can I watch the video? Easy mate! Links in my bio 😘

I mean, they’re not wrong.

He featured in the list alongside Brooklyn Beckham, Ovie Soko, and a load of lords. Sadly, Tatler only made him number 14.

Go check my single from last year 'support network' link in my biooo. Next track 'danger mouse' following up shortly. Got so much to share with everyone in the next few months including first live shows ! Who's gassed for 2018 🤘🏽big up @dolcegabbana for this fire campaign

Not a bad vibe, that.

Aside from his talents, Rafferty Law is a vegetarian and loves animals

When fashion gets really ugly @peta really grateful to have been included in this campaign raising awareness for such an important cause.

As evidenced by this anti-Canada Goose ad.

He is also covered in tattoos

This week been crazy. BUT productive. Off to the ocean for a quick re up on energy. Hold tight London don’t miss me. I won’t miss you!

From what we can figure out, Raff has the following tattoos: A bird on the back of his left hand; a lightning bolt and percentage sign on his forearms; nine (IX) in Roman numerals, SHO crossed out with a red line; some “Salvador Dali men”.

Mum wasn’t too happy: “She wasn’t actually too cross the first time, but I think it’s when you start getting quite a few, she’s like, ‘Urgh, not again’,” told the Evening Standard

• Meet the UK’s 50 most eligible bachelors of 2019, according to Tatler

• Introducing Iris Law: Jude Law’s daughter who is so perfect, she might as well be from heaven