I am so shook

A couple of months ago, the world was shook when we found out what the girl from the looking up and down meme looked like in real life. Her name is Kayla Nicole Jones and if you were shocked at that, you’re about to be even more shocked at Kayla Nicole fighting.

She’s been filmed getting into a huge scrap. She’s admitted on Instagram it’s her, gone deep into how the drama started and aired screenshots between her and the other girl in the video. Strap in, it’s a lot.

The video of Kayla Nicole fighting is going viral on Twitter

If you need a reminder of who Kayla Nicole Jones is, she has over three million followers on Instagram and the same on her YouTube channel, Nicole TV. She’s known for being the face of memes and relatable content. Most recently, she went viral as being the girl from this meme:

Beyoncé when she played Lemonade for Jay Z for the first time pic.twitter.com/XMlfAfN0oc

But now, there’s a new video of her going viral – having a huge fight. The video was posted with the caption: “Now why my good sis Kayla Nicole (NicoleTv) fighting?” And Twitter has gone into meltdown.

The comments on the video include: “I stan even harder than before” and “I mean, Kayla can fight”.

Kayla Nicole is owning that it’s her. In an Instagram live video, Kayla Nicole said she “knows what kinda girl she is she just wants to be famous”. “I had to beat her ass”.

There are gossip pages airing the entire drama:

Kayla also posted on her Instagram story saying: “Everybody fight bruh that’s life famous or not”.

Kayla Nicole’s Instagram story is flooded with screenshots of messages between her and the girl she was fighting with. 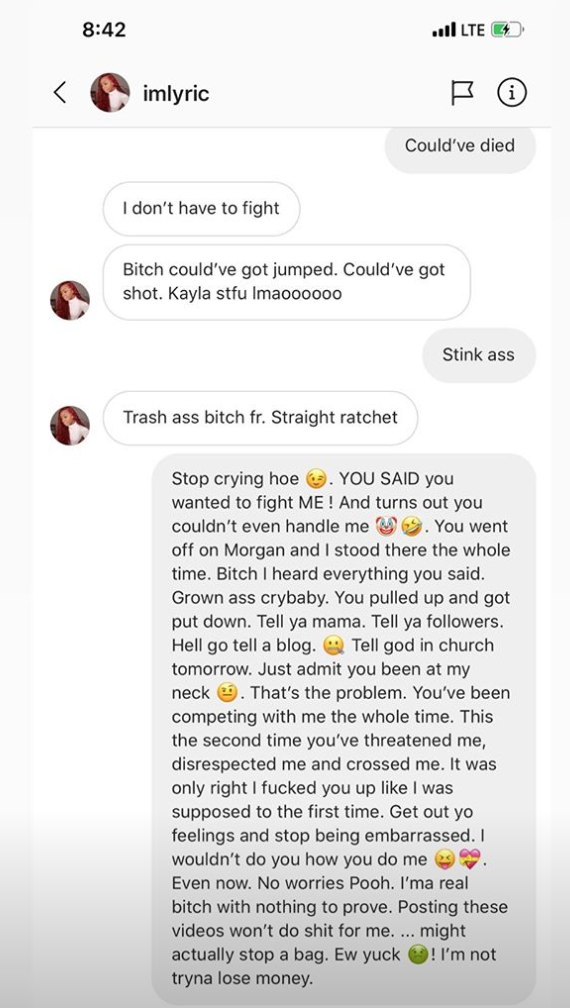 If you want the full tea it’s all over Kayla’s profile, but in short: it starts with a screenshot of them discussing fighting, then goes on to be nice friendly messages between them about how much they inspire each other and then flips back to Kayla saying the other girl just wants clout and money. Kayla also says the other girl has blocked her.

There really is a lot going on here.