India has now denied rumours she CHEATED on Ovie: Here’s the tea

There’s been speculation she got back with her ex

Love Island's India Reynolds has denied claims she has cheated on Ovie Soko.

Early this morning, a gossip Instagram page said India had gone to Portugal over the weekend to celebrate the birthday of her ex boyfriend and they had kissed.

Gossip Instagram page UK Gossip TV said: "Over the weekend India attended a birthday party in Portugal for footballer Kieran Gibbs, who also happens to be an ex of hers. Our source tells us that they over heard her say 'If Kieran made it official with me, I would dump Ovie'. Later on she was allegedly seen grabbing and kissing Kieran's face in front of a lot of people." 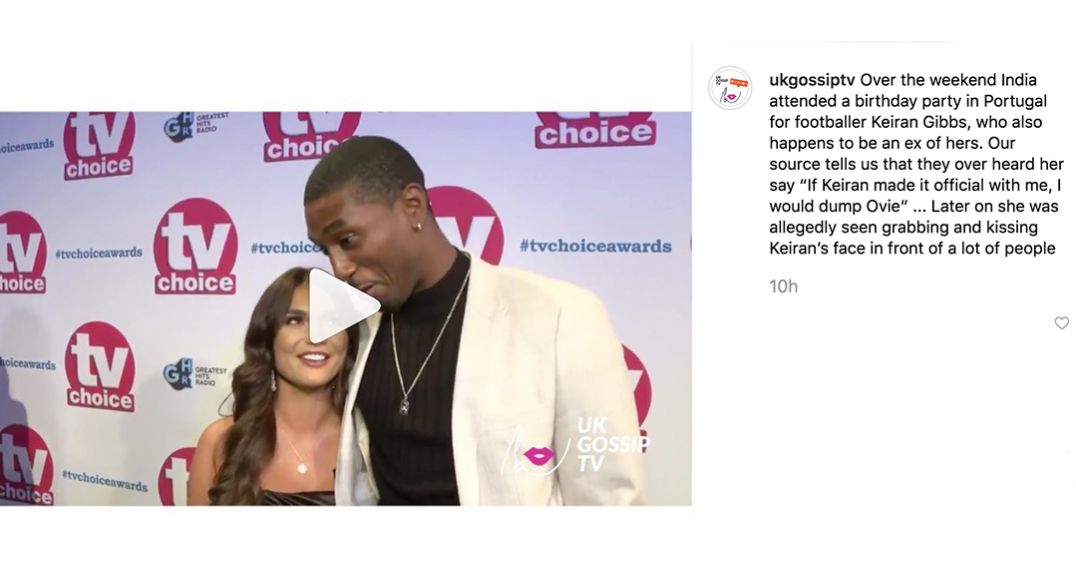 Twitter obviously went into meltdown over the rumours. The memes are a lot. Tweets included: "How ON EARTH did Ovie get cheated on, he’s the literal definition of perfect" and "Who tf in their right mind would cheat on Ovie".

Greg has left Amber and now India has cheated on Ovie. UNO WHAT THIS MEANS LADS!!!! Sksksks pic.twitter.com/pJfKn2Hl4o

However India has denied the claims. Her representatives told The Tab the allegations contain "absolutely no truth" and India was in Portugal for a friend's birthday but the "sources on this one have got it very wrong."

India Reynolds and Ovie Soko came fourth on Love Island 2019 and left the villa together just over a month ago.

Love Island winners Amber and Greg announced they had split up just five days ago. They became the third Love Island 2019 couple to break up. Anton and Belle broke up last week and Harley and Chris broke up three weeks ago, just two weeks after becoming exclusive.

But Ovie and India are STILL TOGETHER so everyone can calm down now!!!

• Everything that’s gone down in the Greg, Amber and Anna breakup drama