I don’t believe anything anymore

It's finally time to use your maths GCSE, because Twitter has been completely divided (no pun intended), by a seemingly simple sum. The question is, what does 8 ÷ 2(2 + 2) equal? But there are two different answers everyone is getting.

You know it's a big deal because the equation has its own meme definition on KnowYourMeme.

"On Twitter, the most common answers to the problem were one and 16, causing lengthy debates between the users over how to identify the correct order of operations."

But what is the correct answer?

A lot of people think the answer to the question is one. Because you do the brackets first and get four, multiply that by the two outside the brackets and get eight and then eight divided by eight is one. 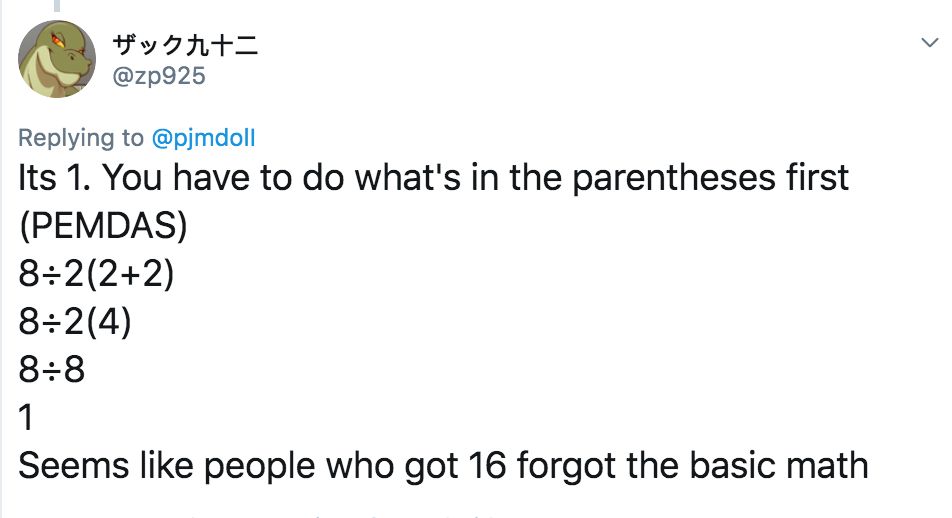 Everyone else thinks the answer to the question is actually 16. Because you do the brackets first and get four, then according to BODMAS (Brackets, Division, Multiplication, Addition and Subtraction) you should then do the division so do eight divided by two and get four. And then you times that four by the four from the brackets and get 16.

Conclusion: Everything is a lie

If you type the sum into Google it says the answer is 16. But most of the answers on Twitter say one.

Some calculators say 16, but some say one – even the machines don't have an answer!!!

Which One You Trust More??? pic.twitter.com/ypMaMPoy0R

According to an anonymous Oxford University professor who spoke to The Mirror: "Without better brackets, there can be ambiguity. There are conventions about the order of operations to try to resolve this, sometimes called BODMAS in UK schools.

"If it still seems unclear, it's best to include brackets to remove any possible ambiguity. Mathematicians do not generally have problems communicating with each other about things like this, but for whatever reason people seem to enjoy posing these kinds of problems on social media!"

The answer actually depends on how you learned maths.

If you use the PEMDAS method (a more US method), the order of the equation is Parenthesis, Exponents, Multiplication, Division, Addition, Subtraction.

But if you use the BODMAS method (more often taught in the UK), then the order is Brackets, Orders, Division, Multiplication, Addition, Subtraction. Hence, giving you different answers.

So BOTH are correct?!

• Can you still pass GCSE Maths?

• Take this 2019 GCSE quiz and realise you deserve no qualifications