He is your perfect man

Three new islanders were teased yesterday, and we think this dude is the best of the bunch. The producer gods have made Greg Love Island 2019's most eligible bachelor.

Along with vegan chef India and Ellie Brown's best mate Harley, the three bombshells look set to cause some serious drama.

But really, it's all about Greg O'Shea: Irish pro rugby player, law grad, and literally the perfect husband. Check him out:

Greg O'Shea is a 24-year-old from Limerick in Ireland 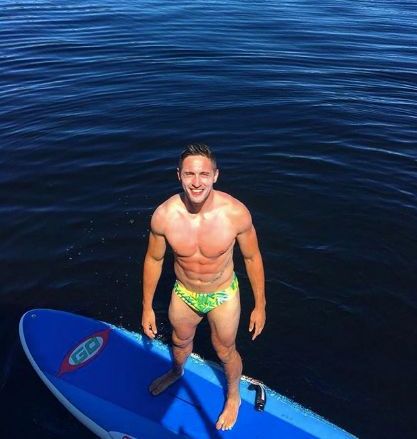 There once was a man in Mallorca,

But he sounds like he'll be a good talker.

Yes, he is a professional rugby player 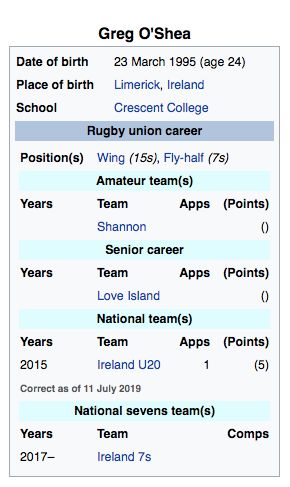 You lot are fucking quick

Greg plays for the Irish sevens team and says he knows "all the pro rugby players in Ireland". Not one to shy out of tackles, fly-half Greg says: "I broke my face a couple of months ago through rugby so I had a broken nose and a cracked forehead!"

And yes, he has a Wikipedia page which fans have already edited to say he plays for "Love Island".

Just to prove he's your perfect man, Greg's also got a law degree

It's an impressive achievement, but even more so when you realise it's from the University of Limerick. Students there have to write all essays in five line paragraphs, where the first two lines rhyme with the last, and the third and fourth lines rhyme with each other.

Greg is a total wife guy

☘️Dream come true ☘️ Massive thanks to everyone who put in years of work for this achievement, also to all family and friends who have been there along the way. Many people have contributed and supported throughout the years even if they aren’t around anymore, you know who you are #WorldSeries

In fact, he wanted to marry her. "I was saving up for a ring but she called it a day after our lives together just didn’t work out," he said. "My career means I’m away travelling a lot and she was struggling with that in the relationship. It hurt a lot and it took a lot of friends and family to pick me up after that."

Wow. Bet you weren't expecting things to get that deep when you came to thirst over a rugby boy. Well, get ready for this.

"I’ve always been a one girl kind of guy… If I see a girl I tend to fall for her hard. Hopefully that can happen again," says Greg.

"After my last relationship I lost my faith in love so hopefully going into the villa can get my belief in love back."

In a massive shock, he thinks he's got a shot with Maura 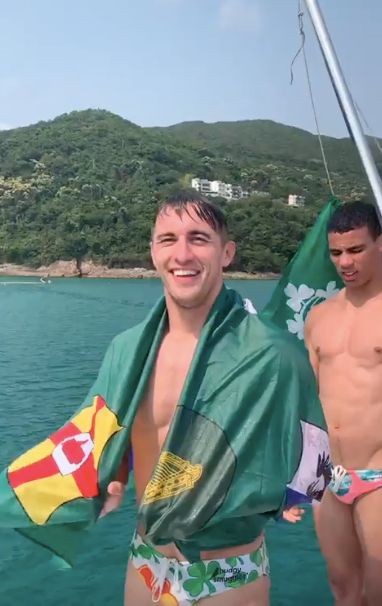 Taken about two seconds before he leaps into the Hong Kong water (via Instagram: @gregoshea)

"I’d say me and Maura will hit it off straight away, being two Irish people and she’s hilarious. She’s very naturally funny and she’s gorgeous as well so you never know," he says.

By the sound of things, he'll be good for villa drama

Describing his worst traits, Greg says: " If I see something that I don’t agree with, I’m not able to hold it to myself – I always have to say something. I struggle to bite my tongue."

And he'll only snake people in a charming way

Asked how far he's prepared to go to get the girl he wants, Greg said: "It’s inevitable I’m going to have to annoy somebody but hopefully I can do it in a respectful way."

Greg will enter the villa with two other bombshells

Check out more Islander gossip below: