Ok, so Maura admits she fancies Curtis in tonight’s episode

Last night's Love Island episode ended with villa icon Maura saying she wanted a man to teach her to dance. For some reason, this man was Curtis.

But was it really Curtis? The edit had people speculating she was actually talking about Ovie, or even a mystery new arrival.

Maura is 100000% talking about Ovie. Love Island once again with the cheeky edits?? #loveisland

However, a preview for tonight's episode reveals that Maura tells Lucie she's into Curtis.

On the bean bags, Maura and Lucie have a conversation.

Maura tells a shocked Lucie: “He’s obviously gorgeous. He’s very manly and I love that. He’s funny. He’s the whole package for me.”

Despite Lucie's audible gasps, she says: “There have been so many times where I want him to teach me how to dance.”

Then in the beach hut, Maura doubles down and says: “I had a chat with him today in the kitchen. If he wants a shoulder to cry on, I’ll be here!” 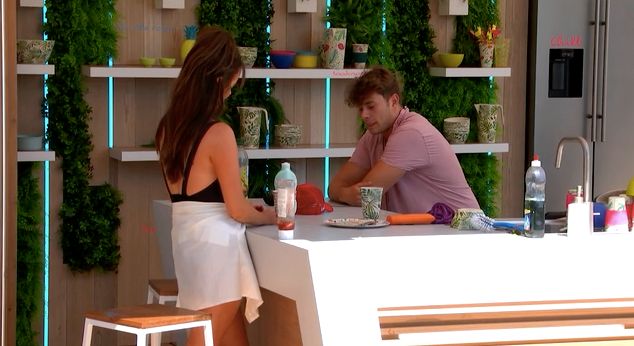 Earlier, she had a conversation with Curtis where she tries to drop some heavy hints. A white feather lands as they talk in the kitchen and Maura, somehow, manages to turn it into pure chat, telling Curtis: “They say that a white feather is an angel close-by trying to tell you something. Have you not heard about that?”

When Curtis asks her to explain, she does a classic: "It means something."

Is she going to lead him on and ruin his life? Will anyone in the villa be able to look each other in the eye in a week's time? I just can't cope.

• Say hello to the first ever Love Island USA contestants