The Rihanna birthday meme has got everyone frantically googling their birthdays

Surprise! Twitter has gone wild for another meme trend! Forget My Yé is different to your Yé, they did surgery on a grape, video killed the radio star and Big Chungus – they are so 2018 viral memes. Now it's time for the Rihanna birthday meme, also going viral as the Rihanna birthday challenge.

You might have noticed on Twitter, people sharing photos of what Rihanna wore on their birthday and how it is "soooo me" or "omg such a vibe". Yep, Rihanna can literally make people do anything. Now she has people frantically Googling her name and their birthdays to see which Rihanna outfit they are. I kid you not, it's a thing.

Here is everything about the Rihanna birthday meme, including how to do it, because I bet you'll check yours too.

Quite easy first step, but still very vital to be able to complete your own Rihanna birthday outfit.

Just the date, and the month – e.g. Rihanna 10th January 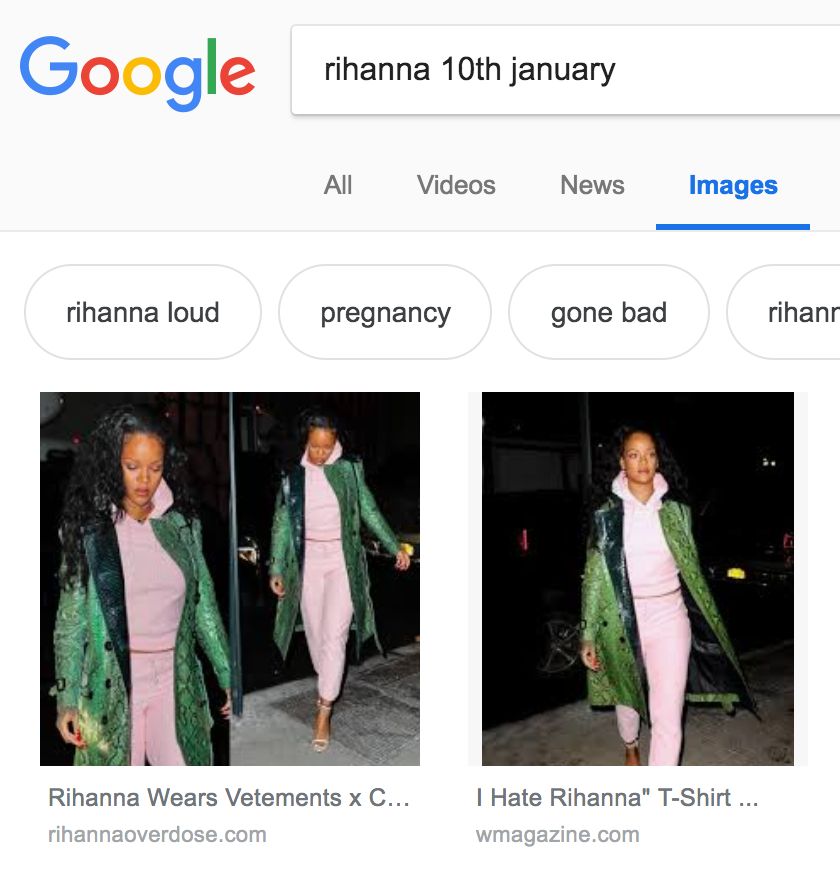 Click on the image tab in Google once you've searched your date to reveal all.

5. Your Rihanna birthday outfit will be there!!!!

And as if by magic, there is your Rihanna birthday outfit. Rihanna is a fashion icon, there is no denying it – so nine times out of ten your outfit won't disappoint. Think everything from Met Gala dresses, to street style outfits she probably just threw together. There is one for pretty much every single day in the year.

Rihanna on my birthday (3/13) is pink Pisces perfection and I could not have picked a better look if I tried 💕👄🌸 pic.twitter.com/Vy0Cp7AiFO

Why is everyone googling their birthday? Where did the Rihanna birthday meme start?

If you're sat wondering why people are googling Rihanna and their birthday, the first version of the meme came from Twitter user, @ChipdNudePolish. She posed the simple challenge to her followers: "Google Rihanna and your birthday to see which outfit you get." She attached a picture of her own result, Rihanna at the 2016 BRIT Awards on February 25th, in a strappy purple fringe dress. Then the Twitter world latched on and went WILD.

Google Rihanna and your birthday to see which outfit you get pic.twitter.com/wd691IEdFr

Her tweet has nearly 3,000 retweets, and #RihannaBirthdayOutfit has thousands of results.

Other than being a few minutes of fun, and realising that Rihanna literally has an outfit for every single day of the year – that's all this meme really is. Whether your birthday is January, February, March, April, May, June, July, August, September, October, November or December – Ri will have an outfit for you!!! You can't deny it, you've probably done it yourself or are going to now.

• Ariana Grande is a blackfish and these are the receipts

‘I really don’t even cook very much’: We spoke to *that* TikTok pasta guy

He told us which pasta he’d shag given the choice

Every dating app bio to avoid like the plague in 2020

I really don’t care how much you travel

Which of The Pussycat Dolls can actually sing? A serious investigation