Urmm so people are convinced Wes has had his lips done?

I have the receipts

I mean sure, they do look a bit larger than in his previous pictures, but it’s perfectly possible that it’s the angle. Plus, he’s not smiling as he usually does.

His face looks quite matte, so he may have enlarged them on FaceTune. But even if he did get them done, why does it even matter?

This is a picture of Wes before Love Island.

But this is also a picture of Wes before Love Island. And his lips look as full as they do in his most recent picture.

Wes has quickly denied the rumours, by posting an Instagram story.

He wrote: “The only photo I’ve uploaded since the villa not smiling with my teeth and I’m accused of getting lip fillers. You guys are mad.” 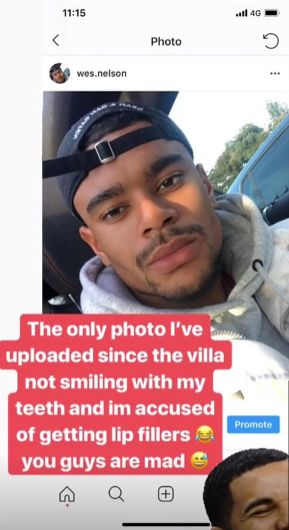 So that’s settled then. What do you think?