‘I was running for my life. We all were’: My seven hours inside Westminster on lockdown

There were rumours a gunman was inside the building, and 12 had been killed

The attacks at Westminster yesterday, where a ‘lone attacker’ drove down the busy pavement of Westminster Bridge before fatally stabbing a policeman, horrified the nation. It led to the death of four people – one policeman, two people on the bridge and the suspect himself.

As many watched the events unfold on their TVs, laptops and phones, thousands were held inside the Houses of Parliament, fearing for their lives.

We spoke to a Parliamentary Researcher, who was having his lunch in Portcullis House as news of the attacks broke.

I’d been working with my colleague over lunch doing errands in town, I was very hungry and so we went over to Portcullis House to grab some food in the Debate cafeteria.

A division bell [which calls MPs to the chambers to vote] had just rung as I was leaving my office, meaning MPs had eight minutes to get from wherever they were to the chamber to vote. Because of the Bell there were many more people, mainly MPs, out and about the public areas. This is also one of the most vulnerable times of the day in Parliament as Ministers are often driving through the gates from their departments.

I had just sat down when we heard some confusion. I left my table and walked into the central atrium where there were more people than usual, everyone was stood up at this point as we could sense something was wrong.

My colleague and I were about ten meters from the glass security screen that divides the public entrance from the Portcullis Atrium. We saw the security guards and police looking nervous. My first thought was that they had found something dodgy in the scanner. My gut told me it was something that they might have thought was an explosive, so I told my colleague to move back with me.

People were walking up to the glass to see the commotion outside. Police and security officers were running down towards the front, they cleared the security area. The police were telling us to stand back and move to the back of the room. 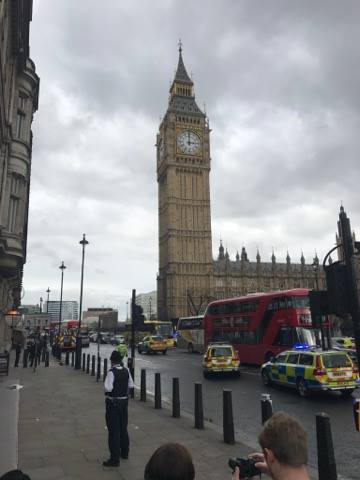 People started running in from the security areas into the main building, and MPs who had just come from a vote were walking up the escalators in a hurry having heard the gunshots. People who had come up the escalators informed us that there were gunshots. We saw people running outside and we moved right to the back of the atrium.

I was told by my colleague, who saw more of what was going on than I did, that the initial panic and unease was caused by people catching sight of the car as it hit people on Westminster Bridge.

At about this point I got a text, which I didn’t read until later, from my boss telling me that there were gunshots and I needed to stay inside. He was about 50 meters away from the attack when it happened.

My initial instinct was to run upstairs, so I got halfway up one staircase and then went down again having realised I wasn’t with my colleague. I couldn’t find him. I found another friend of mine. It felt like we were waiting for ages, although it would have been for a few seconds only.

We then heard people shouting that there were gunshots and the policewoman on the security entrance leapt up and started screaming for us to move back. I’ve never seen anything like what happened next. There were people all around me, everywhere I looked. We ran up the stairs to the offices above, at this point I didn’t know what was happening, but I felt like I was running for my life.

I was shouting after my colleague I had earlier lost and tried calling him, but I couldn’t get through.

We then ran up a few floors before we found and office and locked ourselves in. We didn’t know what was happening at all. We spent a few minutes making sure all of the doors were locked and we moved furniture in front of the doors.

At this point there were so many rumours circulating I heard from others in the room, there were about six of us, that there was a gunman inside the building and that there were 12 people killed already. Another source said that the target was the Prime Minister and that one of her motorcycle drivers was hit. 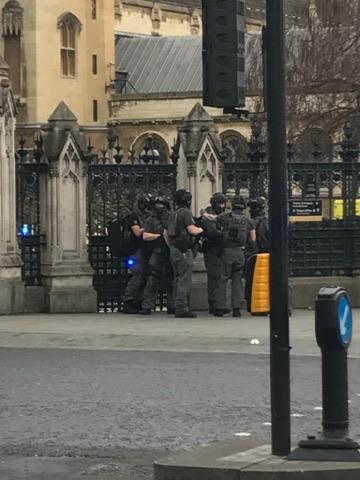 Simply, we had no idea at all what was going on. In any event like this there is always so much confusion and so we took what measures we thought at the time were necessary. Our worst nightmare would have been a gunman in the estate and so we bunkered down.

In the time I spent in the office we all shared stories of what had happened. We were all really well looked after by the MPs researcher who offered us food and water, I felt safe locked in this office. I called by parents to tell them I was fine, they were driving home at this point so I broke the news to them. I called my dad first, because being a former Army officer, I knew he would know what to do more than me. He said that there would be a lot of confusion and I would most likely be stuck where I was for many hours.

I also called my sister and managed to get through to my boss and colleague to see if they were safe. I received many messages, texts and calls and so I updated Facebook to simply say I was in a safe place.

After about an hour the police came round and said they were unsure of the car the attacker had used, so we had to move into the Norman Shaw North building via the link bridges. Portcullis House, besides the actual Parliament building itself was closest to the car and so we had to take that precaution. The police were professional and reassured us every step of the way. We were told by police to evacuate as quickly as possible and not to take any belongings with us. 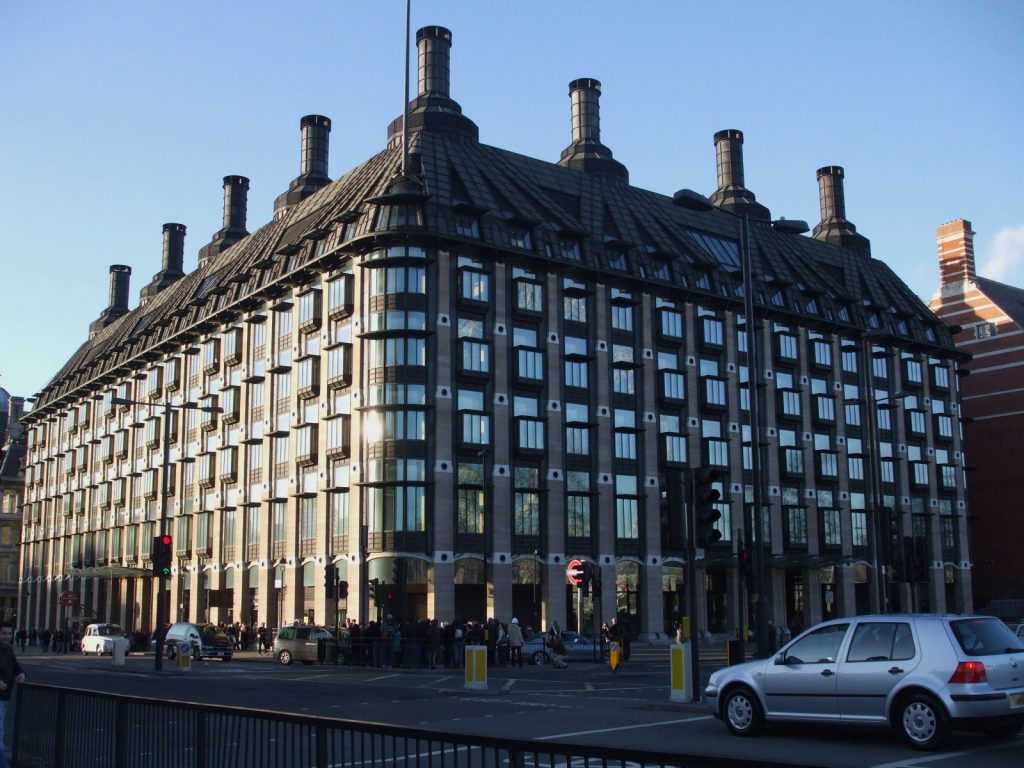 Over the link bridges I caught a glimpse of the embankment and Whitehall. Both were empty of people and there was an eerie silence. We walked over to the other building and we were kept waiting in the corridor.

I saw a few friends of mine here, and since I was close to my office, I went down the stairs to find my friends and colleagues. There were about 8 of us in one of the offices, we had the news on and we were talking. I was quite shaken by the whole thing so I went back to my office to do some work and filing to distract myself.

I then went downstairs to where the other people from Portcullis House were being kept until we were told to leave. Downstairs I saw my old dissertation supervisor, who I had met up with earlier that day, and we shared accounts. I was really relieved to see him.

At about 8pm we were then asked to leave parliament, we were told to walk in an orderly fashion up the spine of the estate and to leave black rods entrance at the far end past the House of Lords. It was very sombre as we left. By this point I was not with anyone I knew and so I walked in silence. 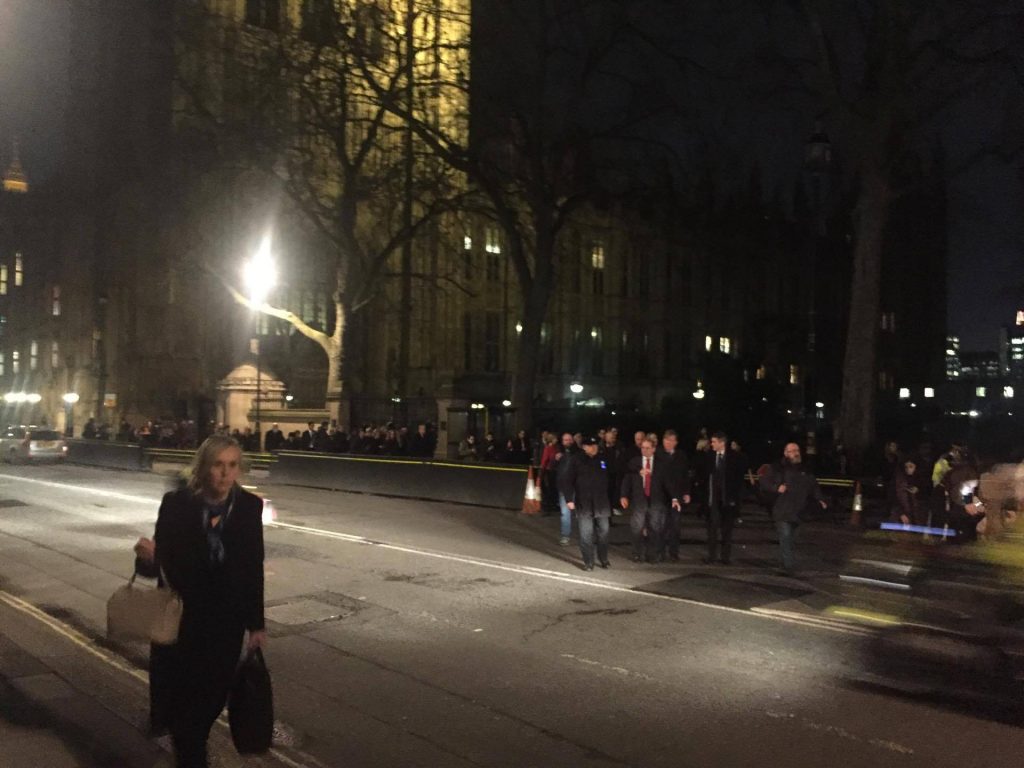 After leaving Parliament we were told to take off our passes, we walked around the back streets of where Westminster meets Pimlico and then out by Westminster Abby. I found my boss on the corner and we walked together until we found a mutual friend of ours, who as a member of the House of Lords was moved into Westminster Abby. I’d been in contact with her the entire time, along with my boss, but it was still really good to see them alright in person.

Coming into work the next day was strange. The whole of Westminster was shut down and we had to show our passes to policeman all the way down the embankment next to Charring Cross station. 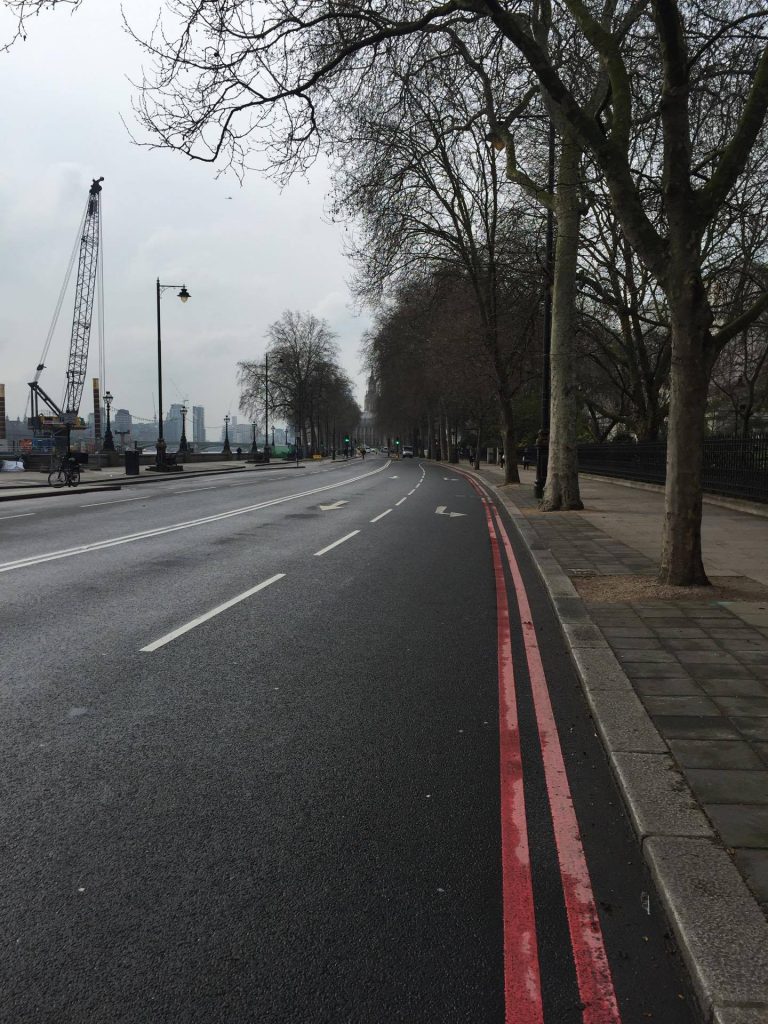 Westminster was emptier than usual today, but were all getting on with it. I spoke to a friend who was 10 meters away from the attack when it happened. 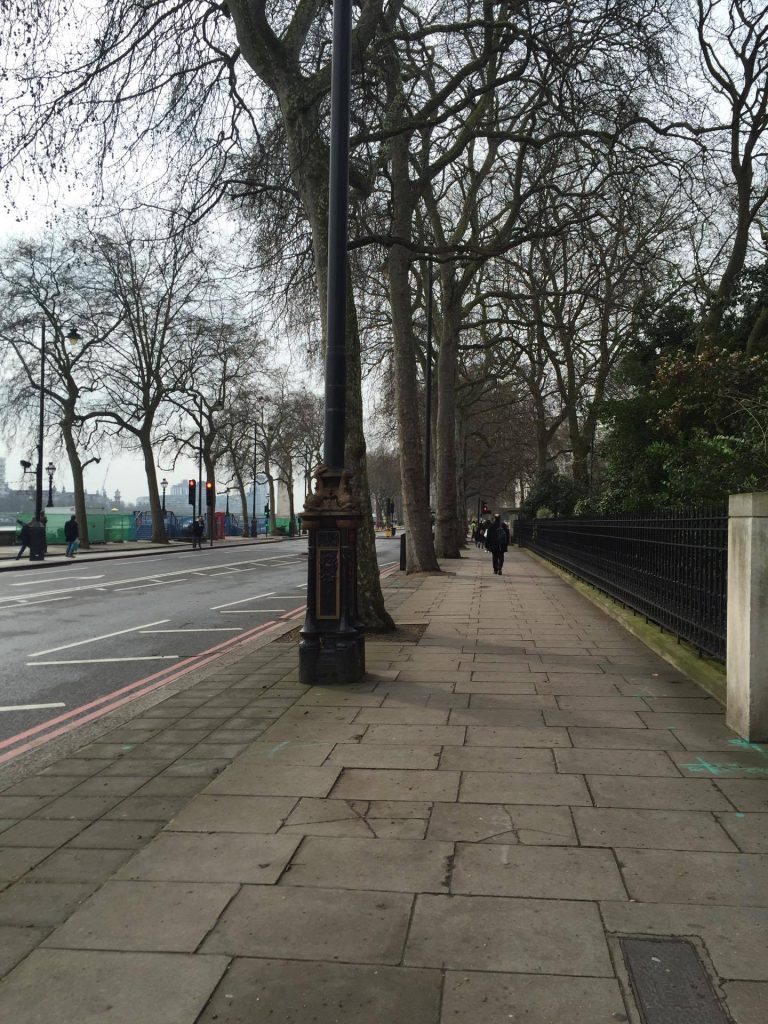 I’m very grateful that my friends and colleagues here were alright, but I can’t imagine what it’s like for the family of those killed yesterday. My heart goes out to the police officer who was murdered as well as those on the bridge. It’s just so unfair what happened to them, and I can’t think of any other way to describe it. 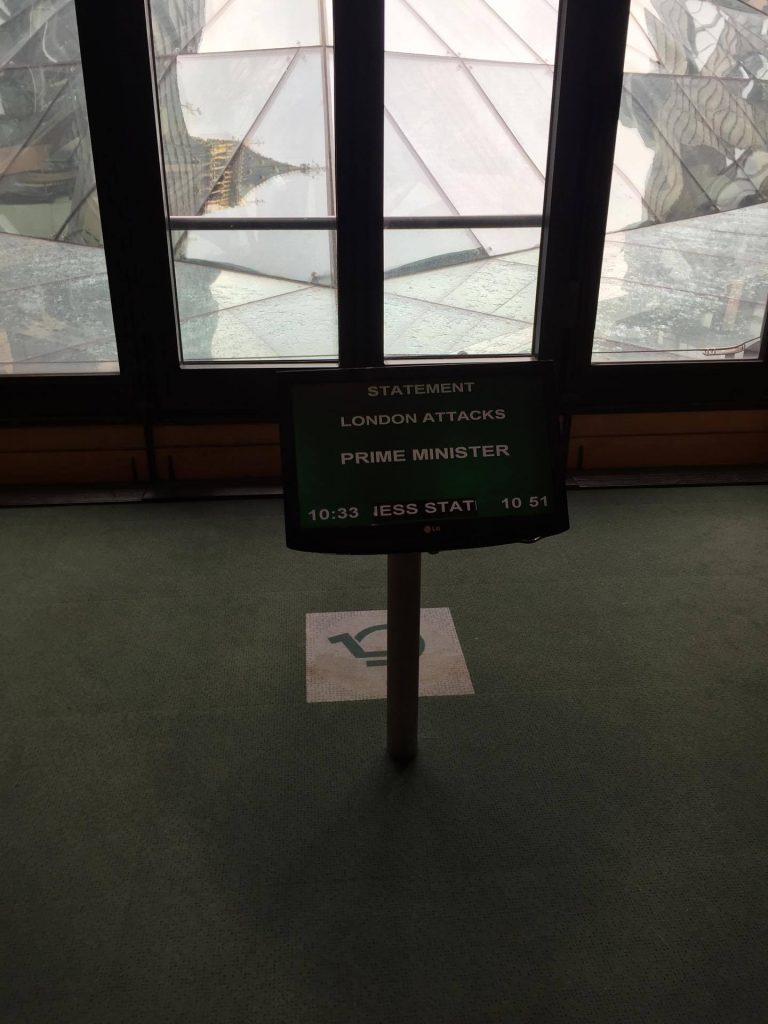 All I can say now is that I’m really grateful to all the police who kept us safe during the attack.