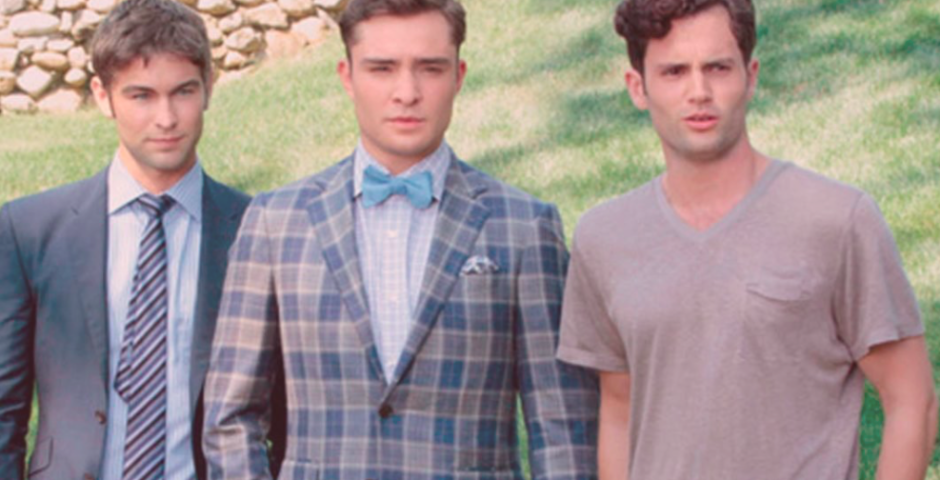 It’s true. But why stop there? Take a real look back at the most formative teen drama there ever was, and you’ll realise every male character was a manipulative dick or an idiotic fuckboy or, in most cases, a generous mix of both.

Don’t believe us? Take a trip down memory lane below.

We’ll start with a controversial one, mainly because Nate’s golden bangs and come-to-bed eyes mean he could literally murder and cannibalise the rest of the Gossip Girl cast and you’d still probably be like haha that’s sooo Nate he’s such a dreamboat.

Look past that admittedly gorgeous face, however, and you’ll see Nate for what he truly is: a boring idiot who spends the whole of the first season cheating on his girlfriend and punching his dad in the face just because he tried to scapegoat him for his drug addiction. Nerd!

Then of course there’s his sexual track record, ranging from multiple married women to Liz Hurley to Serena’s boyfriend’s 17-year-old daughter. Which would be fine, if the actor playing him wasn’t about 30.

Add to that the fact that he just gets handed internships at magazines and places at prestigious colleges and girlfriends and the position of New York mayor and copious amounts of his dad’s cocaine and it’s easy to just be like, you know what, fuck this handsome guy and how easy he has it.

Nate’s constantly surpised-looking cousin deserves a place in this not only for being a cheat, but for having the most stupid van der name in the entire show.

You know, heartthrob Chuck: one half of TV’s most annoying will-they-won’t-they couple since Ross and Rachel, and every ’00s girl’s first crush.

You remember, the guy who tries to rape two separate women in the first episode. Wait, what?

Yep, Chuck’s just about as bad as they come. He sleeps with his best friend’s girlfriend while begging his then-stepsister to bathe with him; he places a formal ban on men from the Upper East Side dating Blair; he dresses like this and doesn’t even get the piss taken out of him.

The show even had to release an apologetic statement about Chuck’s and Blair’s “volatile relationship” when he shattered a window over her head and left her bleeding.

What a bad boy!

Dan, on the other hand, is generally agreed to be a bit of an arsehole – mainly because the existence of the entire show is based on his terrifying, sociopathic five-year-long power trip.

“You can’t be worse than the guys I do know!” Serena declares when she first meets him, meaning she sort of deserves the next half-decade of misery while he bangs her best friend and cousin while writing about it on his blog.

For someone whose redeeming quality is meant to be his knack for writing, Dan doesn’t half publish some garbage.

Not even taking into account the whole Charlie fucking Trout saga, here are some of the lines he penned under the pseudonym of Gossip Girl:

None of it is more repulsive, though, than the fact he publishes the news of his sister losing her virginity on the internet. You creepy, creepy man, Dan.

The archetypal moany teen drama dad in a V-neck T-shirt, Rufus is an infuriating cocktail of contradictions:

He’s got a huge chip on his shoulder about rich people, but he sends his kids to one of the most expensive schools in the world.

He’s constantly referred to as poor and broke, but can afford said school tuition as well as a loft conversion in Brooklyn Heights.

And finally, most infuriatingly, he pays rent on an art gallery despite NEVER HAVING ANY CUSTOMERS.

Didn’t he try and pimp out Blair?

Bart’s transition from steely absent father to full-on pantomime villain was an absolute treat to behold, so watching him attempt to murder his own son before plunging Gaston-style from a hotel rooftop didn’t seem as ridiculous at the time as it does now.

Still, with a face like this, was he ever going to end up being a good guy?

In a show where being a father immediately means you’re a heartless prick, “The Captain” stakes a real claim to the crown.

Fleeing to Dominica after all of the above goes tits-up? You betcha!

How did this guy deserve a happy ending???

Euuuurgh do you remember this guy, with his greasy hair, his obnoxious scarves and his sneering rejection of the rules of monogamy?

Always painfully edgy, Aaron embodied the Brooklyn hipster stereotype before it was cool. Seriously, a whole plotline revolved around him riding off with another girl on his scooter.

Did anyone else find Prince Louis creepy right from the off?

His dead-eyed stare, his wispy voice, the way he began his relationship with Blair by tricking her into thinking he was his own valet – it’s almost like he was always going to end up being a psychopath.

Louis would go onto be a manipulative, deceitful madman who marries Blair as some sort of sadistic game. Who knew!

After that shit you pulled with the fake marriage to Serena and conning Rufus out of Dan’s college fund, you have absolutely no right to sue Mark Zuckerberg.

Gonna be honest, Eric’s only in this because of his haircut.

AKA the least convincing drug dealer of all time

Because let’s be honest, everyone’s favourite character was the fake English lord who was secretly fucking his mum.