Bethany Baker, former General Secretary of Nottingham’s Labour Students committee has come under fire after old tweets have resurfaced that include many racist and anti-semitic slurs and sentiments.

She was chosen to introduce Jeremy Corbyn at his local election launch, but has now quit her senior post.

From 2012-2015, she had said “I cooked brandon chicken and rice, supporting the nigger race”, “#ShitNooneWouldSay omg I love that jew cap”, “Breivik should go get slaughted by a oad of muslims and get forced to live in a synagogue” and “may just become a gypsy so it can become socially exceptable to dress like a slut”. 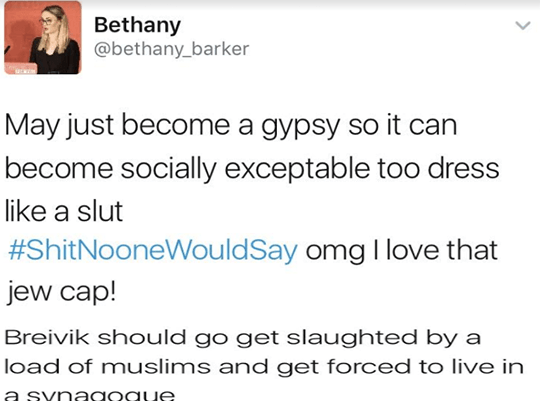 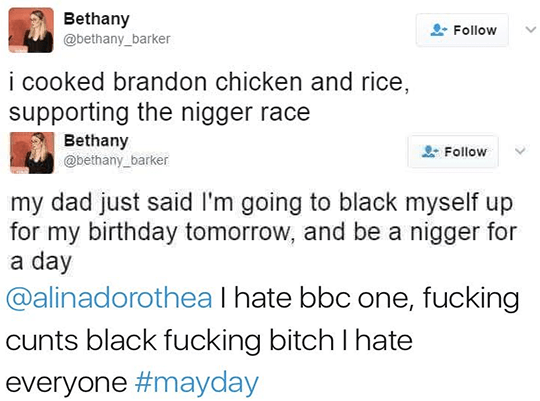 Baker, who recently introduced Jeremy Corbyn at a local election campaign in Newark, Nottinghamshire has since made a statement regarding the tweets.

She said: “As some of you may have seen on Twitter, some screenshots have resurfaced about what have said in the past. I’m absolutely horrified and beyond disgusted about these tweets and they are in no representative of the views I hold now.

“I have no recollection of writing these tweets and I am unequivocally sorry for the shadow has been brought over our society because of it. These views are in no way with what I align with today and am beyond upset that I could ever say such things.

“This society has meant so much to me since started university and the Labour Party has been held so strongly in my heart since have been a part of it.”

The committee she was apart of in Nottingham have also commented on the tweets: “At 2.35pm we were made aware of a series of tweets which Bethany Barker had made on a deleted personal Twitter account, which were of a racist, anti-Semitic and homophobic nature from 2012-14.“