Free pizza and sofa barricades: What it’s really like inside the Owens Park occupation

Plenty of food, a vibrant atmosphere and corona-friendly distancing

Armed with a megaphone, food, water, loo roll, bedding, and masks, students discreetly occupied Owens Park Tower in the early hours of yesterday morning. Within a few hours, they had security posted on the doors, pink flares dancing in the skies, banners hung from the building declaring “EDUCATION SHOULD BE A RIGHT” and “THIS BUILDING IS OCCUPIED” – but most importantly, they have the university’s attention.

“We climbed through an open window around 10am,” Hannah Phillips, an occupier from 9K4WHAT? tells The Manchester Tab. “And it’s been pretty hectic since then.”

“The first thing we did was drop a massive banner from the top floor of tower to let everyone know an occupation had begun,” Hannah says. “For the next hour, we were running around getting lost asking who had string, who was taking pictures, who was organising the press release. Suddenly, everyone from the press wanted to talk to us.”

The occupation is made up of students from UoM Rent Strike, 9K4WHAT? and Students Before Profit, intended to protest against “unsafe campus and extremely high rent”. A blend of first-year rent strikers and veteran student activists, they intend to occupy the tower until the university meets with them to discuss their demands.

Hannah says: “The atmosphere’s been great, it’s really busy but exciting. We’ve had loads of support from MPs, students and unions all around the country. Last night, Glasgow Students Tenants Union sent us pizza. It’s a nice set-up as well, we’ve got loads of rooms and bedding to choose from, although last night I slept on a sofa barricading the door. It felt symbolic.

“Weirdly, there’s also a girl from ResLife who lives in tower. She’s been completely supportive of the occupation and made us brownies. We’re all social distancing, wearing masks and we have plenty of hand sanitiser so we’re not breaking any corona regulations.”

In a TikTok video, they are shown playing Tracy Chapman’s protest song Talkin’ About A Revolution and satirising the weird conditions, which comprise of a barricade of sofas, a TV on the floor, a fake person so they think security are there, creepy, small cupboards, and giant piles of cushions, saying “things in our occupation that just make sense”.

In another video, they dance to the macarena on the first floor.

Meanwhile, the student activist group SAFER told students to protest indoors last night, encouraging them to “make as much noise as you can, because we refuse to be silenced”.

“Students were banging pots and pans out of their windows, shouting and making noise. There were a few people outside protesting, and a police presence,” Hannah says. 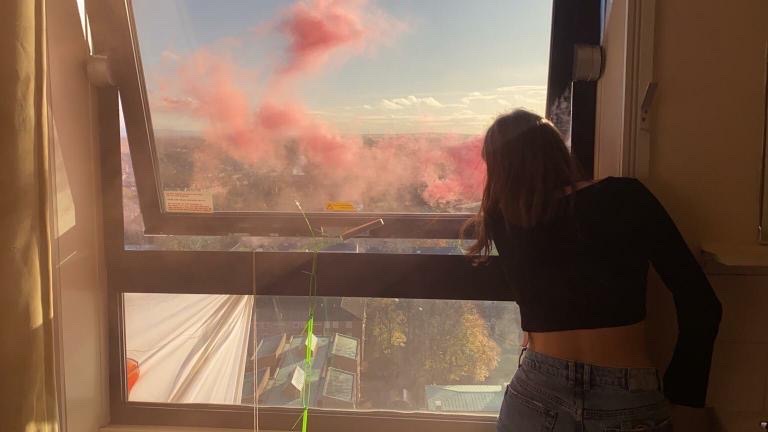 After fences were erected around Fallowfield halls without warning last Thursday, the idea to protest began to take shape. Although the university then said it would be removing the fences the next day, hundreds of protesters still gathered and tore the fences down at the protest.

The university said the fences were part of new security measures for the national lockdown, but to students they represented the university’s lack of support towards student mental health, a failing that becomes particularly potent when you consider that across the country, at least 11 students have died since the start of this semester. Among them is Finn Kitson, a Manchester fresher who passed away in October.

“A big demand is for more mental health support. We really hope the university will put something into place, whether it’s more counselling or just more resources for students to access,” said Lucy Nichols last night on a livestream with Laura Pidcock, ex-Labour MP. 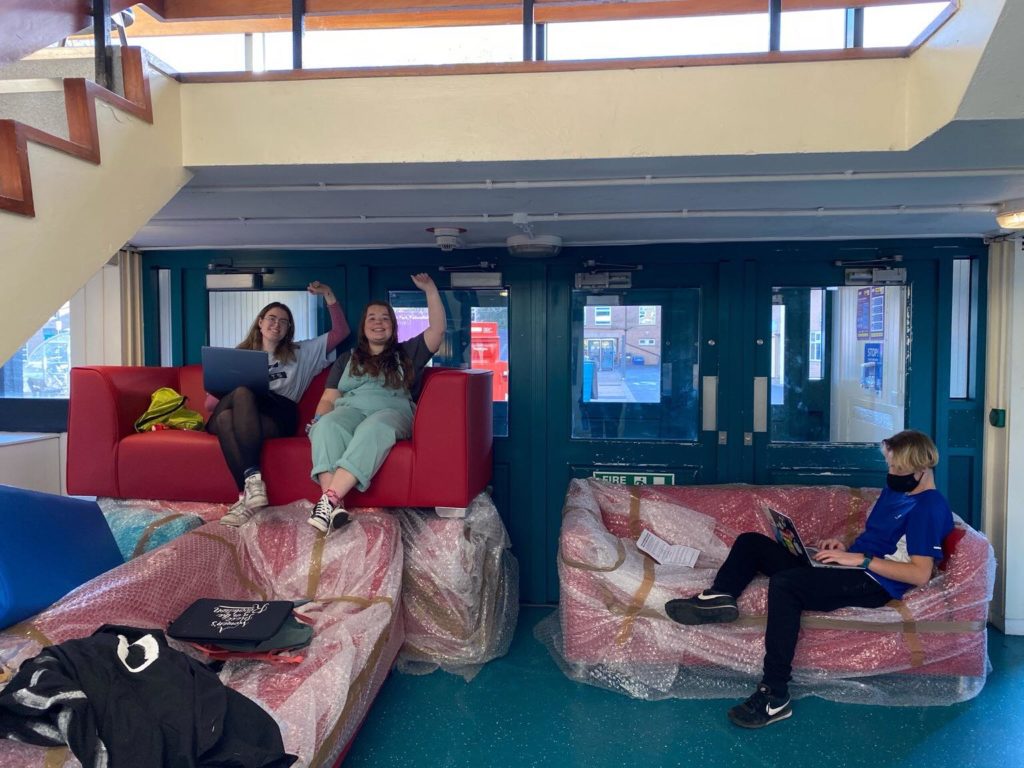 There was another protest on Sunday and there are at least 215 students withholding rent. Speaking to the BBC, occupier Izzy Smitheman said: “We’ve tried protesting and withholding our rent but the university won’t respond to our demands with support.

“Occupying tower is the last resort.”

As the occupation continues into the weekend, occupiers are planning on making more signs and banners, and the university is still yet to engage in a dialogue with occupiers. They have enough food to last a week, but they’re running out of paint, oat milk and nut-free milk: Allies are dropping these off later, as well as some playing cards to keep them busy. As I speak to them, a spokesperson from the SU is on their way to meet with them to discuss their demands, and there’s an online rally with ex-Labour MP Laura Pidcock at 5pm.

A University of Manchester spokesperson said: “We are aware of the protest by just eight students in an empty residential building. Overall, less than one percent of our students have so far withheld their rent and we are already engaging with elected Students’ Union representatives about many of the issues being highlighted by the protestors. The University is fully committed to freedom of expression.

“Contrary to some reports, the students have full access to WiFi – although this was switched off for a period overnight – and they are able to receive food deliveries. The President and Vice-Chancellor has already agreed to meet with student hall representatives and this meeting will take place over the weekend.”

Manchester is officially back in Tier 3: Here’s how this affects students

‘The current policies in place are completely unacceptable to support students’

Student sets up organisation to bring together Manchester action groups

The Student Consciousness Movement is to act as an ‘umbrella organisation’

Last night she said she had written to the student involved

Manchester University has already spent £835,000 on security this year

One student employee usually works 94 hours, but is getting furlough based on just six hours’ pay

‘Amidst everything the government is telling us to do, I think creatives are really working hard to still make sure they can support themselves and each other’

‘They said I look like a drug dealer’: Manc student ‘racially profiled’ by uni security

The university has suspended security guards and is investigating

In pictures: The week of Manchester student protests

An insight into the Fallowfield protests which saw ‘hundreds’ attend

Inside the Manchester protests: Everything that happened at Owen’s Park last night

Police turned up to the latest Manchester Uni protests

Free pizza and sofa barricades: What it’s really like inside the Owens Park occupation

Plenty of food, a vibrant atmosphere and corona-friendly distancing

‘More than ever, online communities are the closest we get to sharing experiences’

‘It’s a university wide problem, they not only don’t tell us things, they don’t listen to us either’

‘Ashamed and humiliated’: Manc staff send letter to uni over the Fallowfield fences

192 members of staff have signed a letter to President and Vice-Chancellor, Nancy Rothwell