MyManchester and Blackboard were both inaccessible for most of the day

IT problems left University of Manchester students unable to access their timetables throughout the first day of the academic year.

Both students and staff were locked out of services such as Blackboard and MyManchester as IT staff attempted to fix issues with the University's central login service.

Even when the correct details were entered, users were left confused as the login portal would not allow access to their accounts. An error message wrongly informed them that they may have mistyped their password or had their account locked.

Unaware of the widespread problems, many assumed the error was on their part having not used their University login credentials since before the summer break.

Being the first day of the new semester, some introductory seminars were disrupted as staff were unable to access presentation slides and files from Blackboard or demonstrate its functionality.

The UoM IT Services Twitter account first awknowledged the issue just after 9am. Several follow up tweets repeated that the issue was being urgently investigated, with the issue finally resolved just before 3pm.

Some people are experiencing an issue with IT login; we're investigating and as soon as we know any more information, we'll let you know.

During the day, IT Services suggested that students unable to login could use their Facebook Messenger chatbot to retrieve their timetable. However, this can only be used by students that know the alphanumeric code for each specific module. 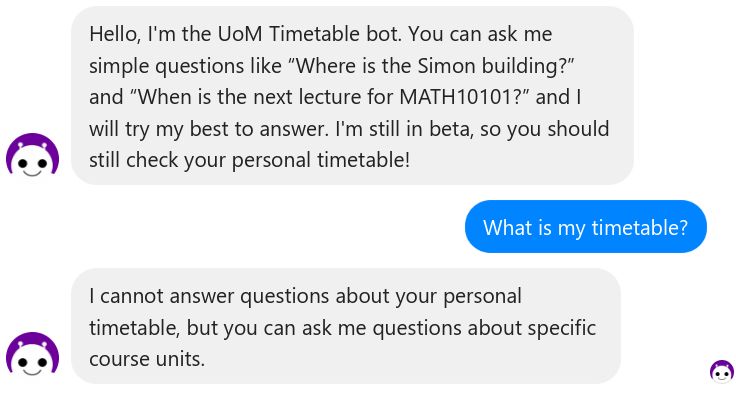 The service availability tracker on the IT Services website advised users to continually retry logging in, as it was suggested that most cases would be successful after enough attempts.

IT Services also retweeted a thread first posted by the University's Timetabling Office when MyManchester suffered an outage back in January.

The thread advises that each school can still access a student or lecturers timetable, and provides further instructions for staff to download this as a PDF.

First up, your School still has access to your personal timetable. They can look up where you need to be. (2/6)

The following day, the campus was hit by a WiFi outage, with both the Eduroam and UoM_WiFi network affected. The issue was resolved within the hour.

Afternoon all. There is currently an issue with the Campus WIFI – both #Eduroam and UoM_WIFI are affected. Sorry, we know this is frustrating and we're looking into this for you now.

Students vented their frustrations at the login service outage on social media, with some mocking the fact the outage occurred on the first day of term.

first day of uni n mymanchester is down lmao

Hi there. Any update on this? I can’t login , can’t access my timetable and I’ve got a class at 11.