Rail services have been delayed, cancelled and amended due to the protests

All incoming and outgoing services from Piccadilly station have been suspended due to ongoing protests on train lines, having particularly distressing consequences, with many students unable to carry out plans to visit their mum on Mother's Day.

Up to 100 protesters are said to be sitting on train lines, holding banners which read "Stop turkey from helping ISIS terrorists!"

This is particular inconvenient for those of us who planned to spend the day with their mum – as the protesters arrived as early as 12pm, since which all ingoing and outgoing journeys have been halted.

One onlooker described that the protesters were "chanting and refusing to move" from the tram lines, resulting in the suspension of all lines.

The protest is said to have been organized by Manchester's Kurdish Community following the Turkish governments' involvement in Syria's conflict. 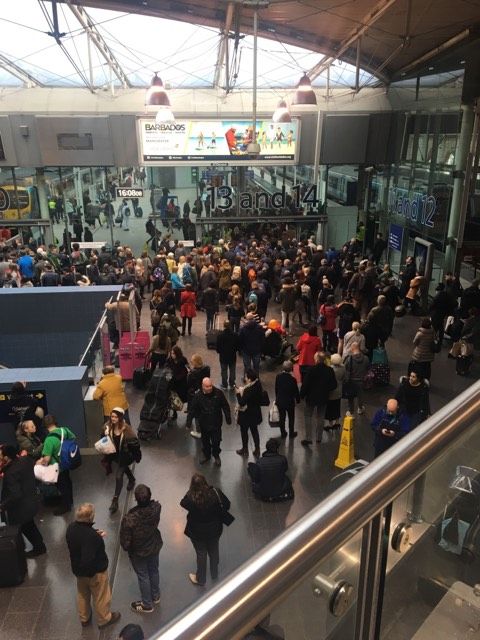 One concerned student seemed visibly distressed as she was unable to make it home to see her mum as planned. Northern Rail has been forced to make alternative arrangements as some passengers scheduled to make rail trips to Amsterdam have missed their departure.

Updates are currently being given, with police currently attempting to safely remove the protesters' from the train lines. It is understood that they are slowly leaving the station, though this remains unconfirmed.

Though this is inevitably frustrating and irritating for students attempting to visit family today, the 6-week Turkish air strike over Syria remains the focus of the protesters. On Monday, at least a dozen Afrin civilians were killed during Turkish air strikes in the region, with the crisis under-reported and relatively unacknowledged in British news.

Despite the frustration, police and Northern Rail have urged passengers to remain patient, with suggestions of refunds in light of the 90-minute delays when the lines do re-open, as well as the cancellations.