The essay is on ‘something you have learned’ in first year

Today UCL wrote to all students explaining that first year students’ exams and assessments which have a deadline either today or later this term will not count towards their grade either this year or towards their degree overall.

The only assessment that will count towards their final grade is a “reflective assignment” based on something they have learnt this year. This assessment will only have a pass or fail grade, and requires a pass for you to progress onto second year.

The “reflective assignment” is designed for students to “reflect on their learning” across their degree this year. University guidance does not explicitly ban your reflective essay being on the subject of learning how to yeet VK across The Loop dance floor, though it does not encourage it.

The response amongst the student body to this decision is incredibly mixed, to say the least.

Many first years are incredibly happy with the outcome posting replies such as, 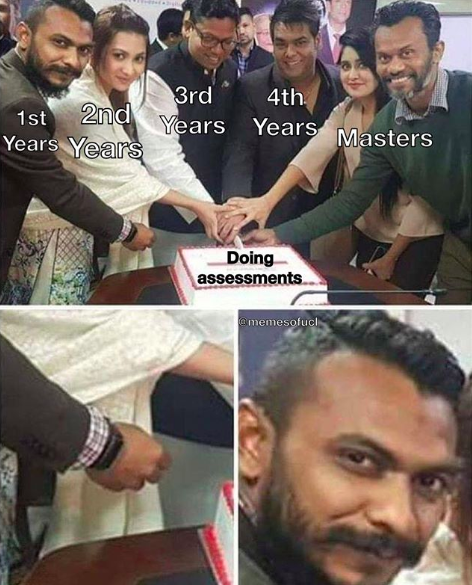 Some freshers are undoubtedly smug, though many first years feel disappointed by the decision. This is because they feel as though their studies are being taken away from them, as a combination of two rounds of strikes and now the cancellation of assessment means they have very little to show for their first year.

One student said: “It somewhat throws everything out of balance, and is a little disappointing given that this was our first chance to prove ourselves in a proper exam scenario. I saw it as a chance to redeem myself after my A-levels, which didn’t go as well as I’d hoped.”

Another first year added: “I’m not surprised, I get the decision, but now I have no incentive to really learn the content and it sucks having ‘nothing to do’ for the next six months.” With a third fresher adding: “Bit of a pisstake really. First year definitely doesn’t feel like it was an actual year of uni.”

However, the predominant response from second and third years is outrage. They feel they have been “robbed” of an easy ride, or that these students won’t have to work as hard for their degree. One second year student said: “These first years might as well have just not bothered with uni at all.” Another added: “God I wish I were a first year with no deadlines now.”

Some students are also sympathetic towards first years as the rest of their degree has just gained extra weighting for most subjects and means that second and third year will have more pressure on them. A second year student from the Faculty of Arts and Humanities told The London Tab: “They don’t get the easy first on 1/9th of their degree and can’t make the most of like beginners languages and stuff. And we [second and third years] are all getting everything we do marked probably slightly more leniently than if we were to not be in this situation.”