‘We made this place what it is, not the investors’

The University and College Union announced strike action in 60 UK universities including Exeter. The strike action began on the 25th November and will end on the 4th December, unless employers engage with the issues the union is tackling.

According to an article on the UCU website, 79 per cent of members voted to back strike action over changes to pensions, as well as universities' failure to address problems with equality, decreasing pay, increasing workload and casualisation. These issues affect not only university staff but also students, with 61 per cent of students supporting the strikes.

UCU have published an open letter to students to explain the dispute. 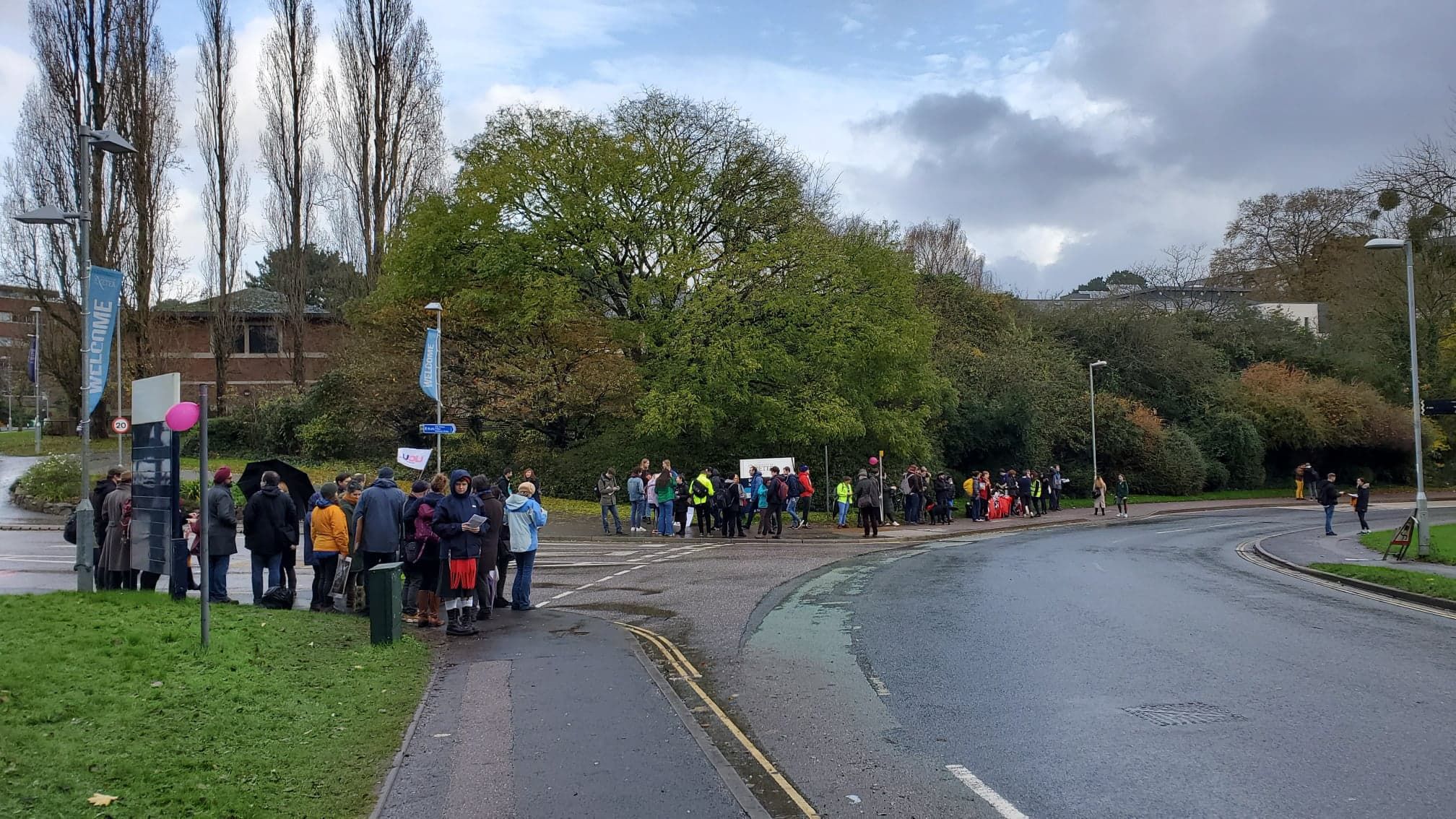 We took to the picket lines to ask university staff and students what made them want to take action. Here's what they had to say:

A postgraduate working full time in the English department told The Exeter Tab: “I’m paid for roughly a third of the labour I’m actually doing. It’s the same for my colleagues.

"I was an undergraduate here, and I chose to come back to Exeter because the English department had a really good reputation – it had earned TEF Gold. They only meet these criteria because the staff work so hard. They’re the ones who’ve made this place what it is, not anyone else, and not the investors.”

My partner took a day off paid work today to look after our child so I could go to the office and do a day of unpaid work because I can't realistically fit my current workload into 40 hours a week. We are #striking for more reasonable workloads. #UCUstrike

One Modern Languages lecturer told us: “the issues affect all of us, but some of us more than others, like the workload and the issues with progression.

"Also, with a part-time contract here, you’re expected to do 15 hours of teaching. The problem is that it’s not just 15 hours work, there’s all the admin that comes with it.” 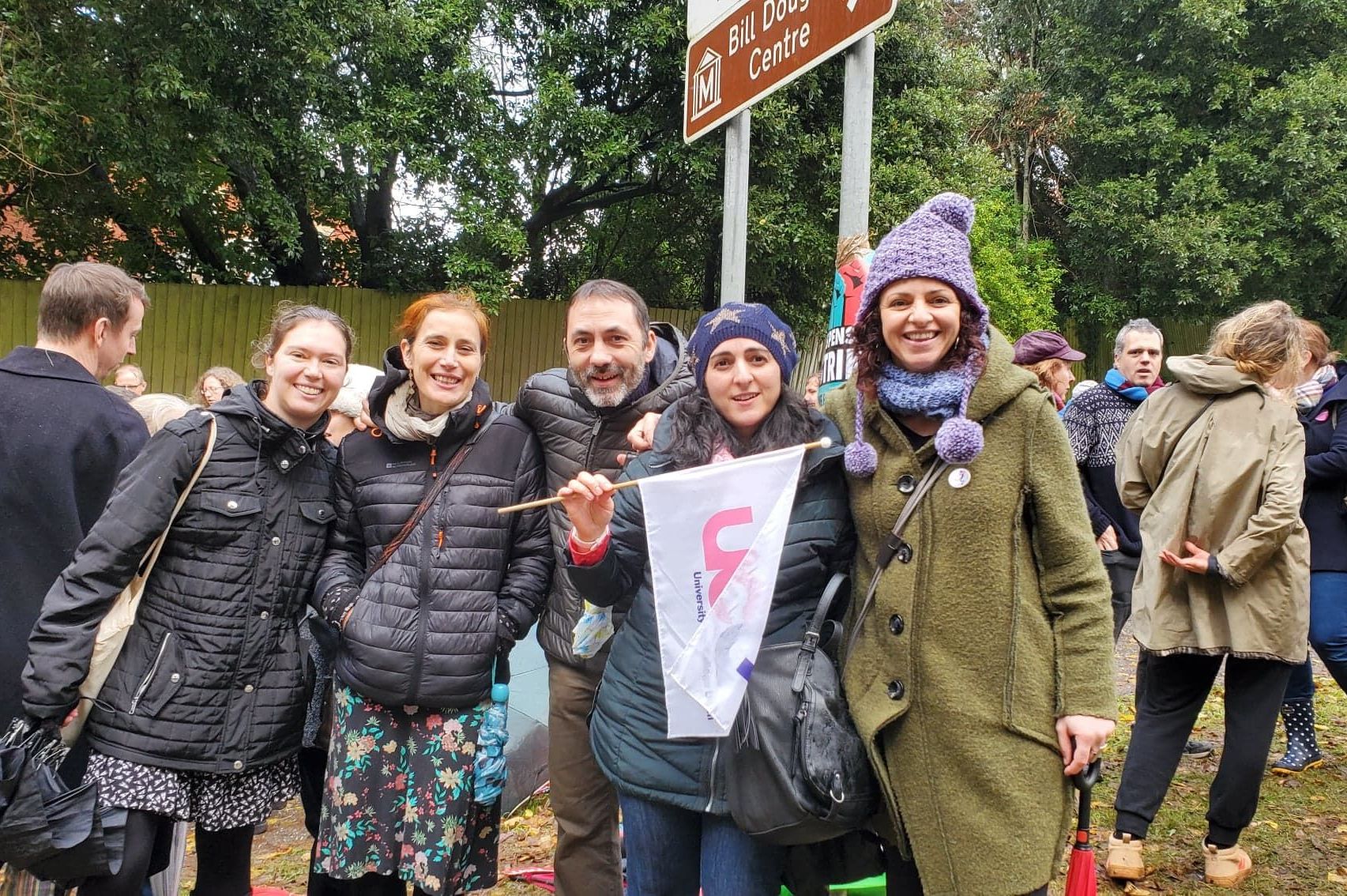 A postgraduate Teaching Assistant in Psychology agreed, saying, “they expect us to mark a 2000-word essay and give personalised feedback in 20 minutes. The pay isn’t hourly!”

Her colleague added, “for each seminar, you get paid for two hours, one hour is preparation time. That’s unrealistic, nobody can do all of the reading and plan a whole seminar in an hour. The hourly rate is misguided at all levels.”

One student on the picket line supporting the strikes said: "I can tell over the past few years how much my lecturers ability to teach has been affected by being put under so much stress. Solidarity!"

Socialist Students Society have been catering for the striking staff in a show of solidarity, as well as offering free soup, curry and biscuits to students who stop for a chat or to support their lecturers. 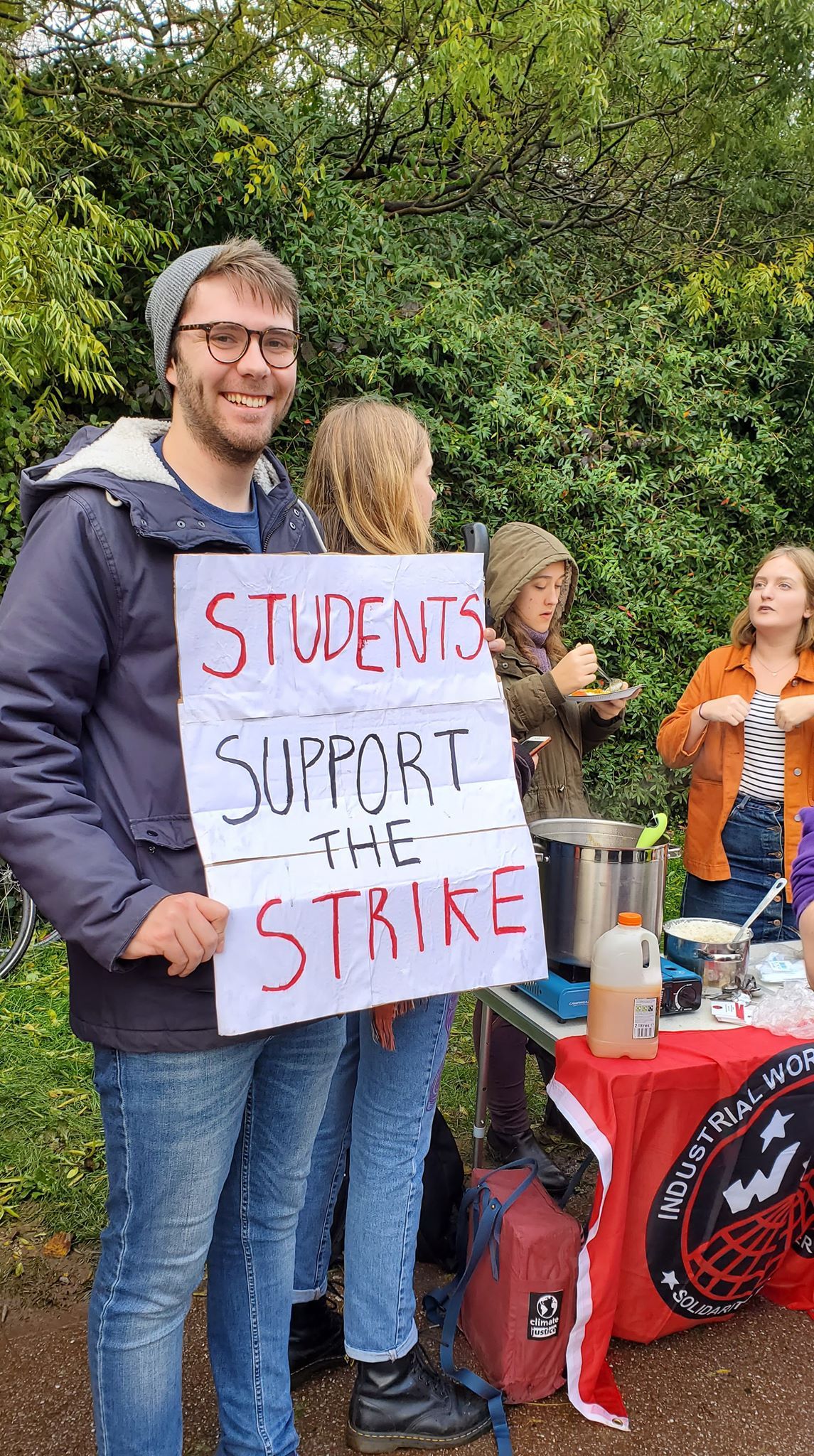 "I do not personally want to be paid any more, but I have colleagues struggling to pay rent," one Modern Languages lecturer explained to The Exeter Tab.

They added: "They keep telling us they can't afford stuff, but management are being paid hundreds of thousands of pounds a year. My partner gets four teaching hours a week – you can't live on that." 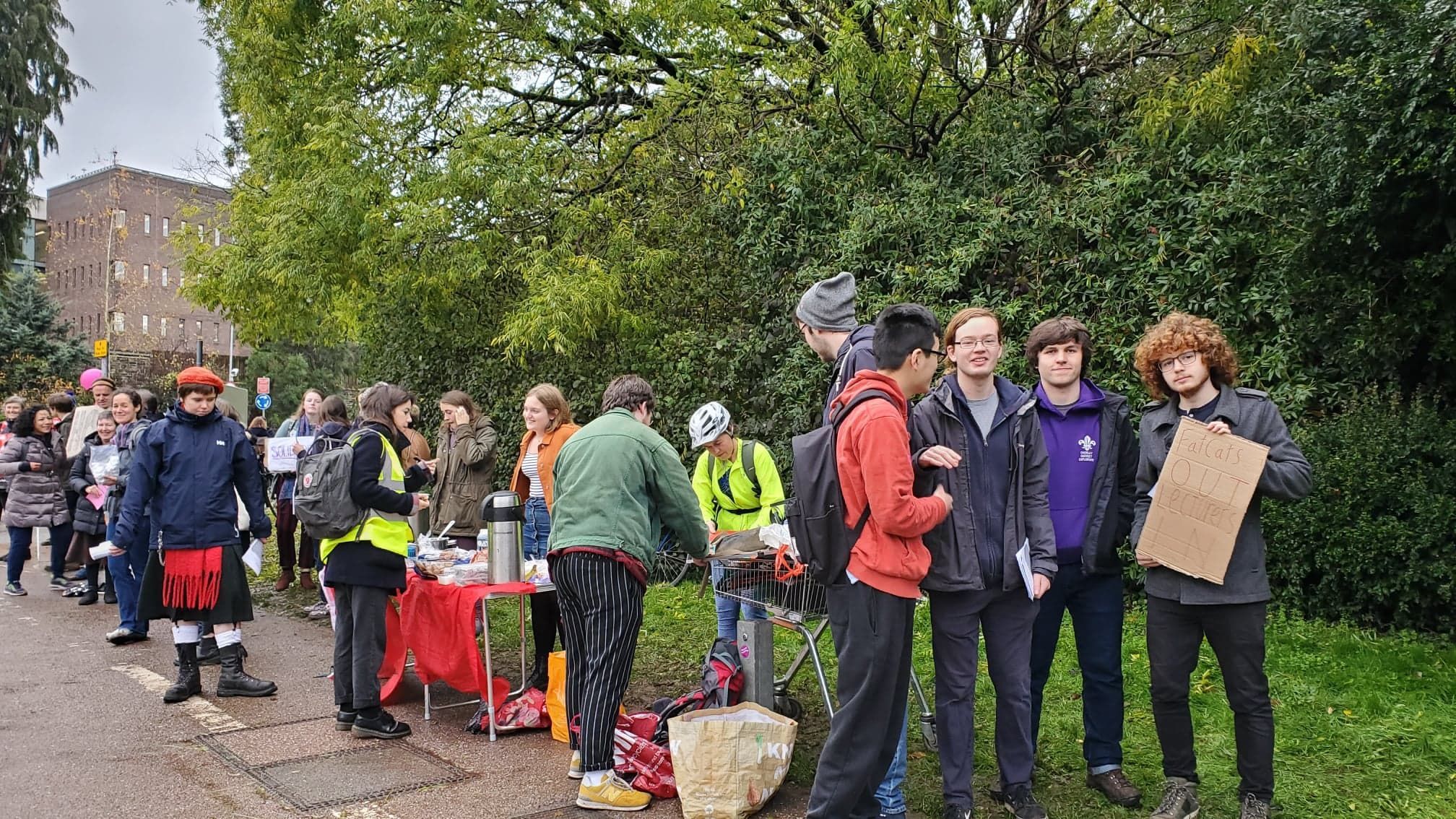 The President of Labour Society, who was also at the Forum Hill picket line, said: "I'm supporting my lecturers because I believe what they do has value, and our money should be put into the things we value, not the Vice Chancellor's 800k salary."

A PhD student in microbiology told us: "I'm here because I support my lecturers. The pay cuts are terrible, the working conditions are terrible. I see the ridiculous hours they're expected to work, and the stress and anxiety it causes them. I'm against the marketisation of education."

Dr Ettore Marchetti, a lecturer in Italian, told us: “I'm supporting my colleagues. I'm worried about the types of contracts staff are being offered. I was affected by problems with contracts in the past. If you're part-time, there's no opportunity to change to full time."

One Occasional Teacher in English said: “I haven't had a contract… at all! And I had to specially request to be paid the first time."

A member of Modern Languages staff in the FLC added: "There are no guarantees. The work is casual, I have no contract. I've had to work many, many years like this." 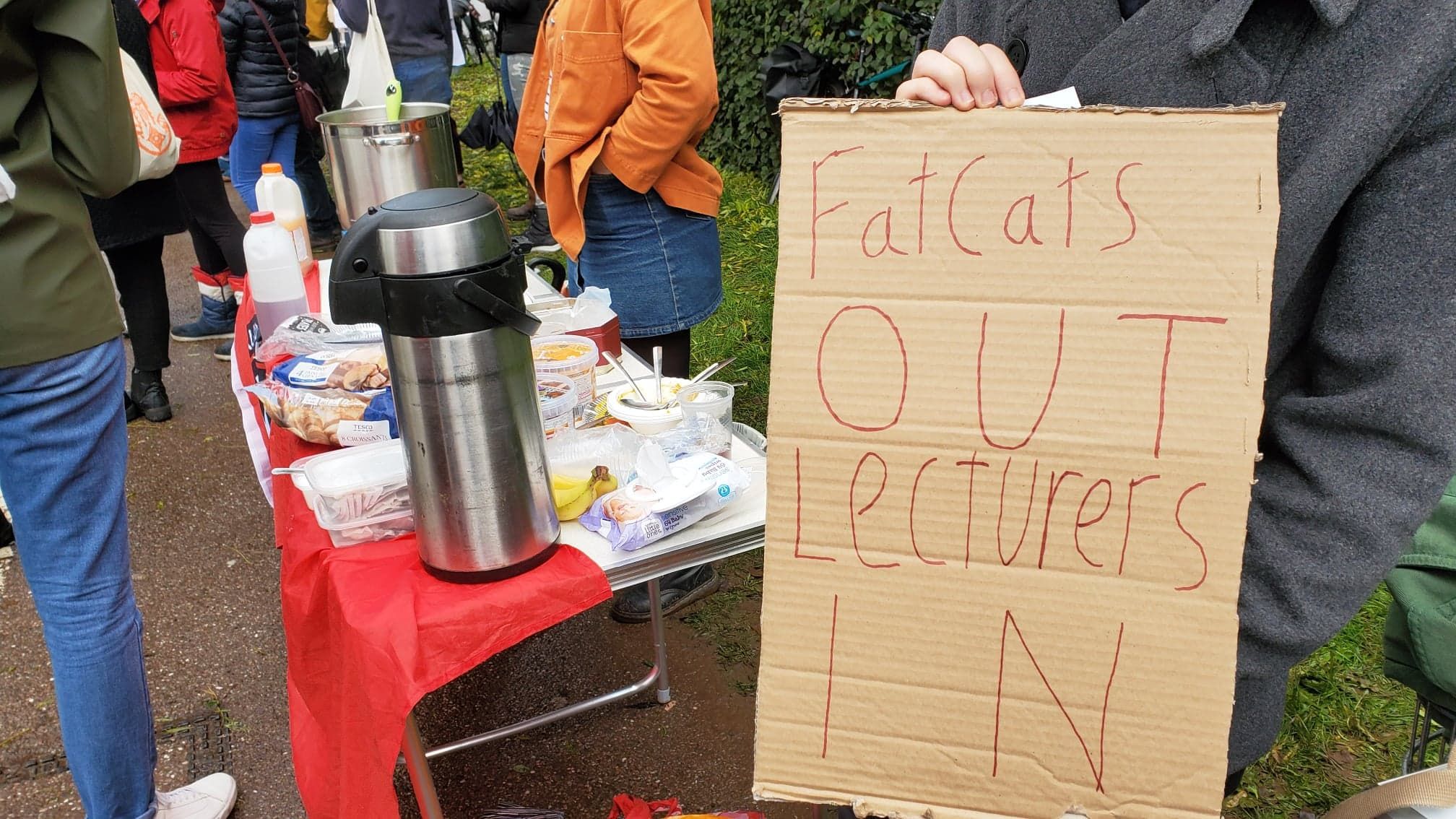 Lecturers from Exeter and from all over the country have taken to social media to make their voices heard.

I really, really do not want to strike again. I want to be teaching my awesome students (and, you know, getting paid). But the casualisation of HE, and the dismantling of our pay, conditions, and pensions, has got to stop. #ucustrikehttps://t.co/1M0CqWO9Gj

This comes after Vice Chancellor for the University of Exeter, Steve Smith's £420,000 salary was revealed. He is due to be paid £830,000 for his final year in his role in 2020, the biggest payout in the history of the university sector.