Michael McLauchlan enjoys the first night of The Dumb Waiter at The Assembly Rooms. 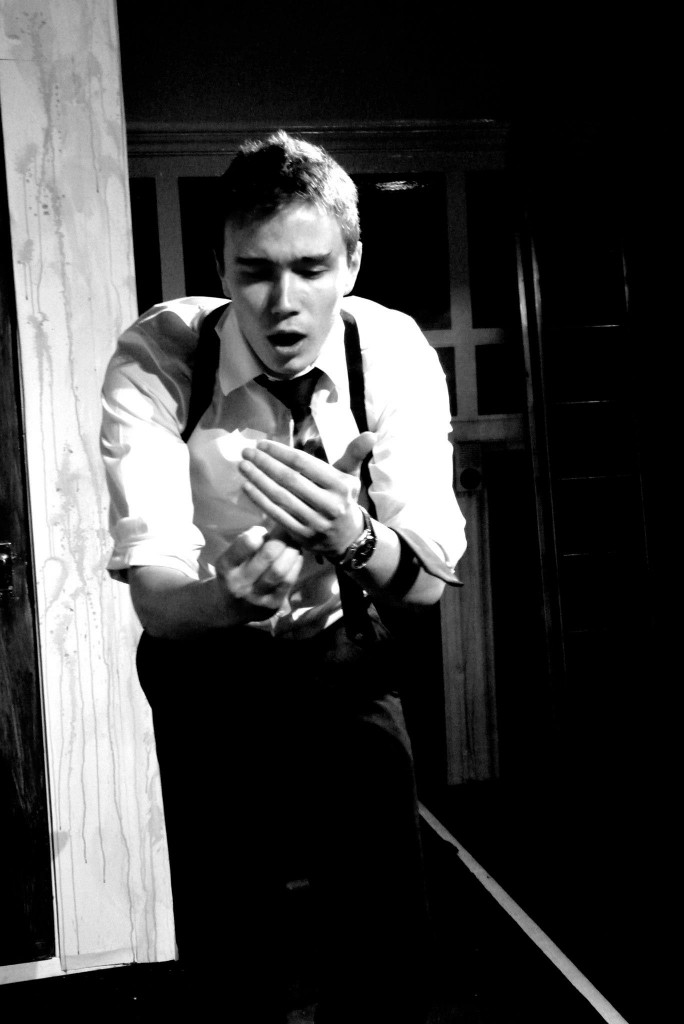 To stage avant-garde Pinteresque drama in a student theatre environment is an audacious risk.

The actors of any production of ‘The Dumb Waiter’ should underpin an orchestration of futility, irrationality and delusional state of the human condition behind the overarching veil of linguistic clarity.

Moreover, their acting should reflect the rapid changes of tonality embedded in the drama. Audiences should be left uncertain as to whether laugh at the absurdity of the situation or flinch at the ever increasing tension and unnerving atmosphere.

NADSAT’s production manages to successfully integrate most of my requisites of ‘The Dumb Waiter’, which, I might say, is an incredible feat for student theatre.

The Assembly Rooms is definitely not an ideal venue to stage ‘The Dumb Waiter’ as its depth could have restricted any audience’s sense of immediacy with the only two actors onstage.

However, director Charlie Oulton averts this by bringing the backdrop closer downstage and limiting the space Drury and Forde had in which to move. This manoeuvre also allows the audience to see up-close the impeccable set.

The rustic, gritty and minimalistic set perfectly encapsulates the very mysterious nature of Pinter’s play. Whether it is the ripped wallpaper effect, the two bare light bulbs hanging from the ceiling, or the very simple but effective dumb waiter, the aesthetic works very well from a holistic standpoint. 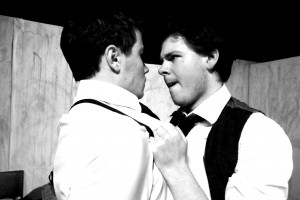 However, to determine the quality of any production of ‘The Dumb Waiter’, one must scrutinise its tour de force; the level of performance delivered by the actors. Forde simply shines as Gus, the rather pathetic and lovable ‘goof’.

I daresay that his comic timing is spot-on (his first awkward steps onstage or his ludicrous ‘kettle’ argument are particularly hilarious).

The extent of his nuanced characterisation also extends to the other end of the spectrum; when Gus begins to feel unnerved and desperate. Forde’s sudden shift to emotional outbursts of rage makes him all the more sympathetic as a character.

Drury, on the other hand, has the arduous task of playing the cold and insensitive Ben. This character is harder to deal with simply because his physicality is limited to ‘lying on a bed’ for the first half of the play.

Masterfully diverting a monotonous portrayal, Drury feeds his characterisation with accentuated facial expressions and a raspy voice that booms through The Assembly Rooms at times.

Together, both Drury and Forde have a sublime sense of rapport between them. By using each other as spring boards, the pair of them sustain their colourful characterisations throughout. 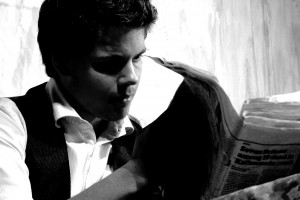 Despite the acting being incredibly refined, they lack some of the longer Pinteresque pauses throughout the play.

Especially in the first half, the actors could have made it easier for the audience to digest the comedic rhetoric of the playwright’s illogical dialogue (repetitions, redundancies, etc.) with slightly longer pauses.

However, the actors did in fact warm into their silences towards the end, particularly when pauses denoted moments of tension (pauses were faultlessly delivered when both Ben and Gus discuss their last ‘job’ for Wilson that involved a ‘girl’).

In retrospect, NADSAT’s ‘The Dumb Waiter’ is tuned, polished, and effective. The level of maturity expressed in this production is second-to-none, thus setting a pretty high bar for any other student theatre company wanting to successfully perform Pinter.

Here’s a couple of things I found out the hard way, so you don’t have to.

The airport was truly a ghost town

The Durham student lifestyle never fails to surprise me

‘I’m constantly trying to prove I’m not a dick’

If it’s Dark Fruits you really need to reassess yourself

Spoiler alert: Castle misses out for once

She was looking for someone to play the role of Derek Chauvin, George Floyd’s killer

Rt Hon Robert Buckland QC MP has has shown support by offering to contact the Vice Chancellor of Durham after reading the student letter, which now has over 2000 signatures

The amount of times I’ve almost dropped out, honestly