And it all launched in Bristol

Ever stare into the bottomless void that is the fridge in your 8 person house and wonder “what the hell do I eat today?”

Good news – there’s now a computer programme that can scan your facial expressions and moods and inform you exactly what you should be guzzling down. We went to the launch event in Bristol to try it out.

This was first event ever to trial the ‘EAT’ technology.

We were lucky enough to pig out before any other city. The event included all of Just Eat’s most popular restaurants, from Jamaican goat curry to Mexican tacos, there was food for every want. 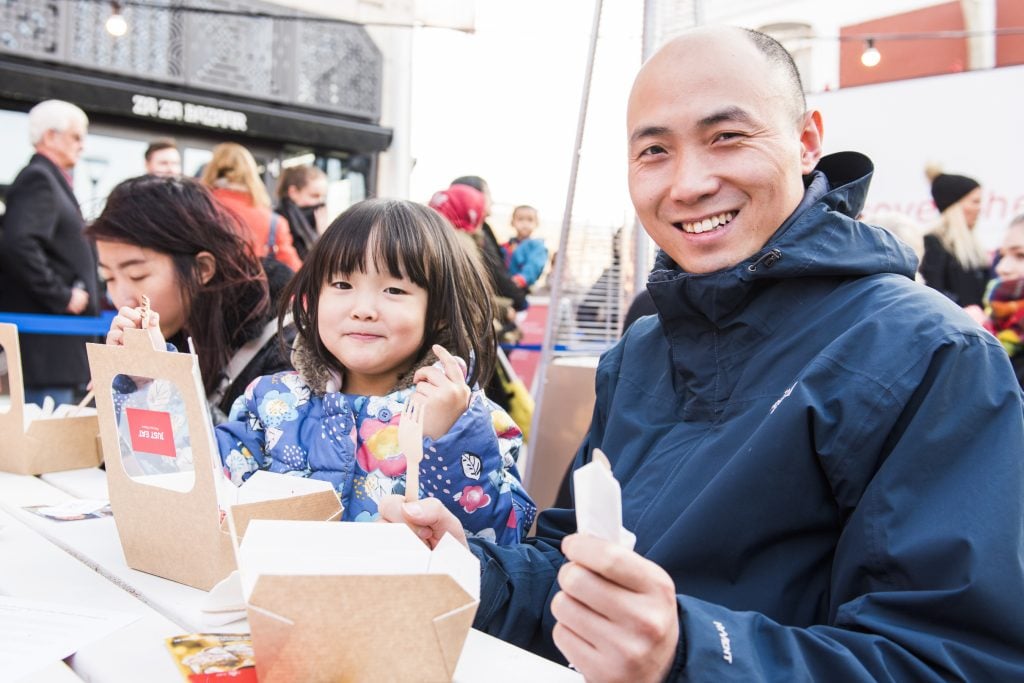 The technology is based on scientific research and nutritional insight and is designed to help hungry customers decide what they want to eat.

By using Emotional Analysis Technology ‘E-A-T’ (no pun intended), the system makes food based recommendations based on the mood you are in. It works by analysing your facial expression whilst you look into a camera.

Snapchat I hope you are listening – I feel food filters will be the next big thing. No more just becoming the pizza, but instead being handed the pizza.

In general, the technology sorts the hungry customer out, as it states what food would suit them. Praise the Lord, no more umming and aaahing.

The scheme is sponsored by Just Eat; all too helpful as the new technology echoes the brands name. Coincidence? I think not. 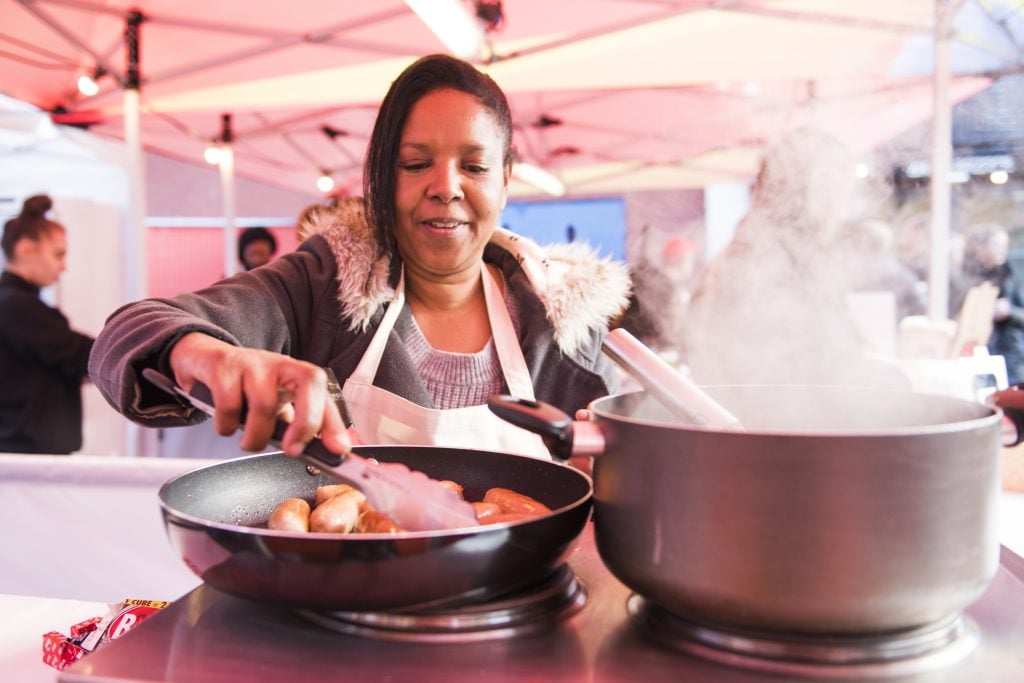 The ‘EAT’ allowed for six emotions; happy, sad, fed up, surprised, angry or worried. Unfortunately for me, there wasn’t a hungover option, but you win some you lose some.

Each emotion was assigned a specific type of food, and this was meant to combat the emotion or try and sustain it. For example, if you were happy, you were advised to have the chicken skewers (which were credited with triggering the release of even more Serotonin, a hormone that is associated with happiness.)

I was feeling happy-according to the face scanner so was recommended Mediterranean chicken skewers with pita and couscous as provided by Bristol’s own ‘Zest’.

I probably wouldn’t have chosen the skewers while there was a classic Sausage and Mash also on offer, but I went for them all the same. Truly scrumptious.

Cheekily pretending to be fed up to the facial expression monitor, I also decided to try the waffles with chocolate sauce from Coco’s. Fluffy.  Moist. Delicious. Would recommend. 11/10. 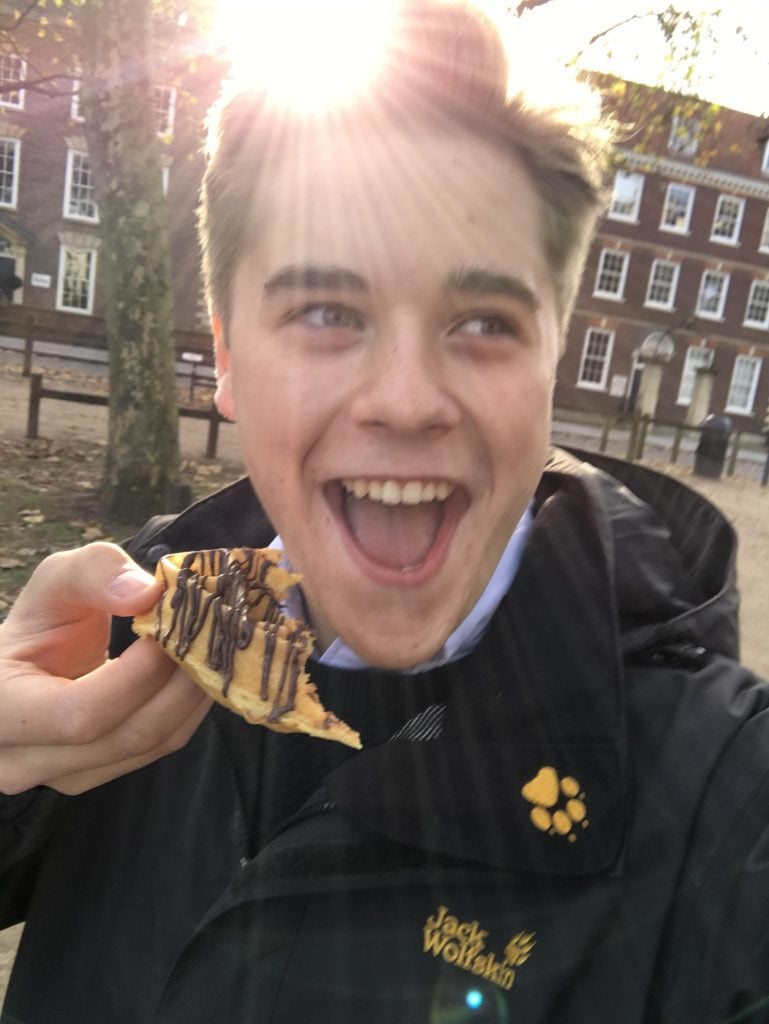 Upon having my face scanned, I was told that I was a happy individual and therefore had the chicken recommended to me, much like Max.

However, I had to try the Jamaican goat curry courtesy of Cafe Conscious, as it was something that I had never had before – a good idea as it was fabulous. 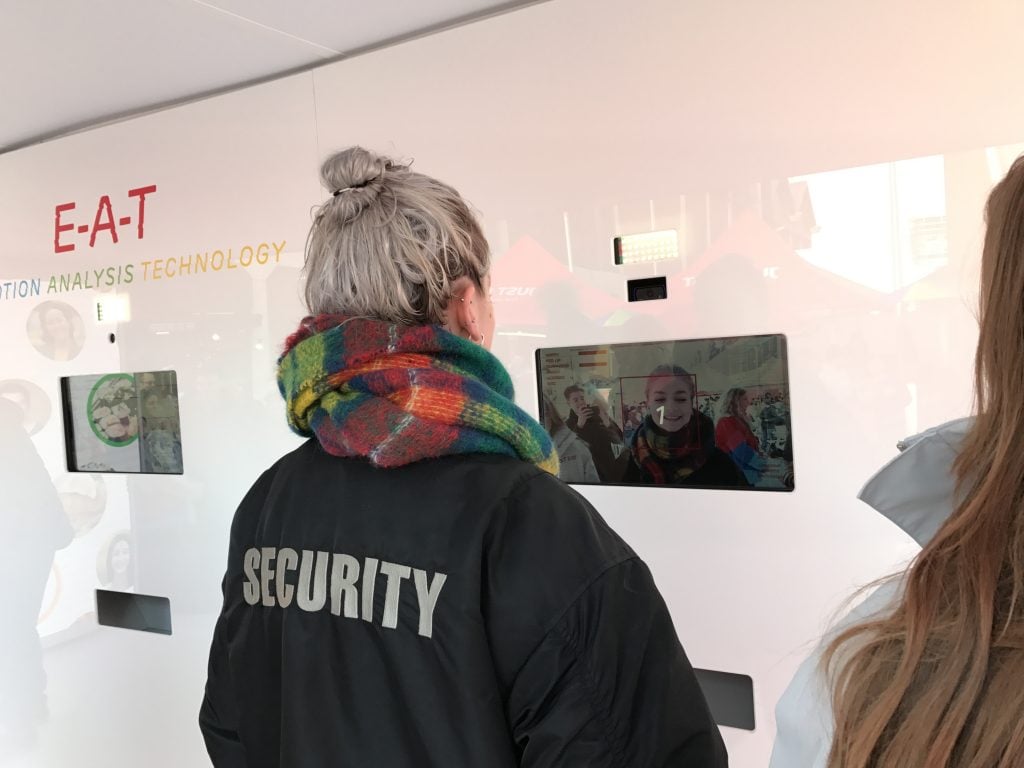 Miller Green, a restaurant that specialises in vegetarian food,  was also offering a Vegan Thai Curry which the facial scanner advised me to go for too.

I didn’t really expect it to be ‘go back for dinner later’ good, being vegan and all, but the dish was absolutely delicious and allowed me to run around channelling my inner ethically sound self, ignoring the goat curry that I had had about 20 minutes beforehand. 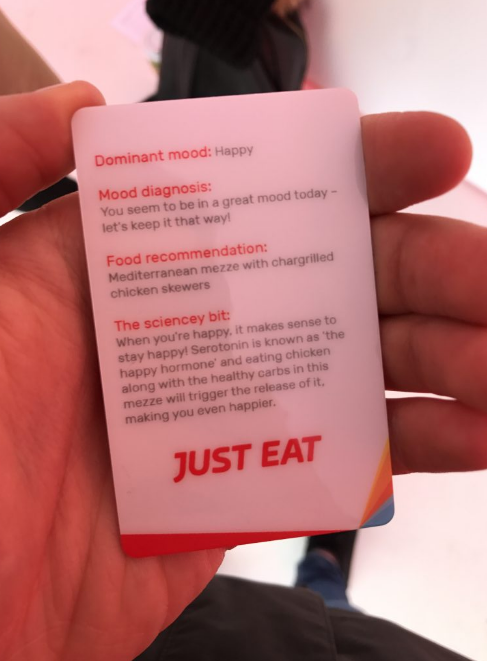 My triumvirate of cuisines was completed with sausages and mash.

Having no idea how I had any room for the huge portion sizes, I’d like to thank my hangover for instilling me with a furious hunger.

As all this food was exchanged for a tiny red token, I’d like to say that this Saturday the phrase ‘winner winner chicken dinner’ was true on every single front.