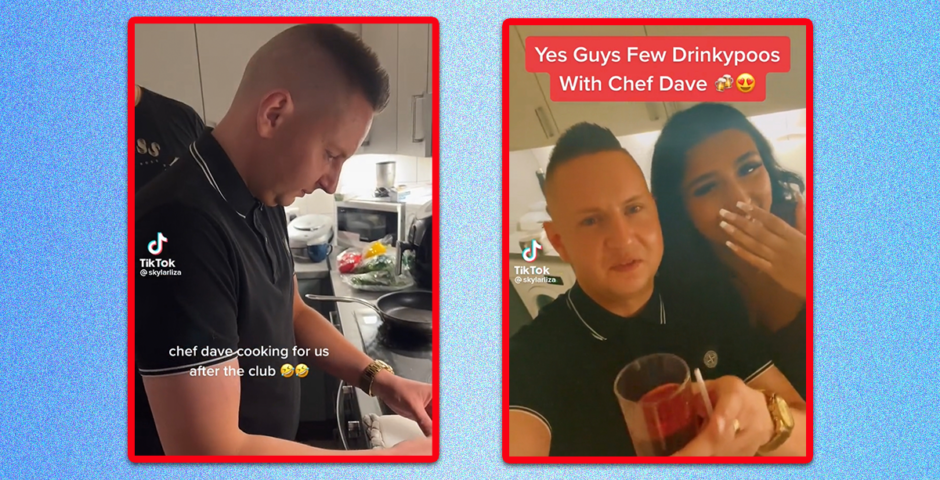 Chef Dave is all over TikTok but most people won’t know him for his culinary ability. The spiky-haired cook is famous for catchphrases such as: “fookin yes guys” and “drinkypoos.” He’s always out on the piss in his home town of Nottingham and has been known to appear at iconic student clubs like Pryzm. But it seems a big student night out isn’t enough for Chef Dave. He’s all about the afters.

Nottingham student Skylar came home to her uni flat from a night out to find Chef Dave in the kitchen. Her flatmate had bumped into him in the street after going clubbing and invited them back to theirs for afters.

“I came in at a different time and I just walked in and saw Chef Dave stood there,” Skylar told The Tab. “He asked to take a picture with me for his Instagram. I was just so confused but then he just started cheffing up and we just made TikToks with him.”

In this TikTok, Chef Dave holds a “drinkypoo” and a cig next to a bemused Skylar.

All Skylar and her flatmates had in were ingredients for an omelette, so that’s what the professional chef was tasked with creating.

In this TikTok, viewed over half a million times, we see the artist at work as the Come Dine With Me theme tune plays in the background.

The verdict? “It was good,” Skylar said. “The boys ate it up bare quick.”

• Exclusive: We spoke to the student who created the Binley Mega Chippy song

• Whatever you do, don’t search the ‘Dubai Porta Potty’ trend that’s going viral on TikTok