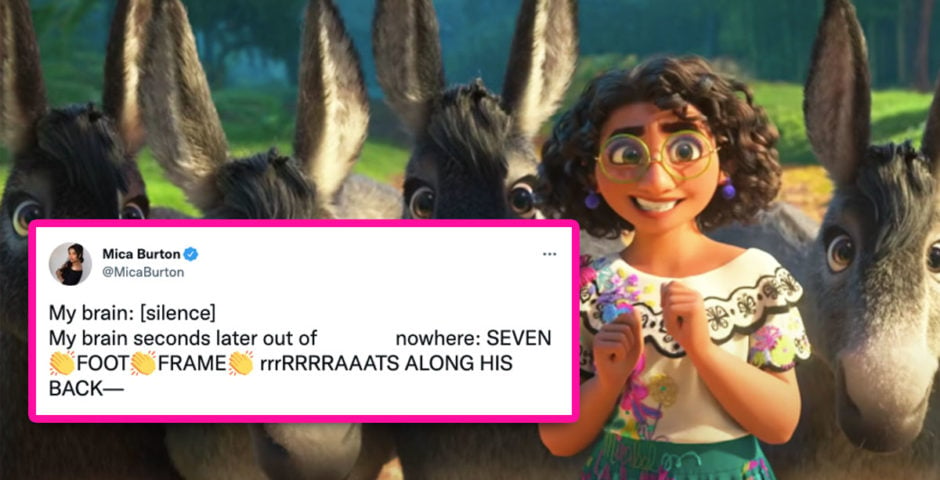 ‘Ok fine you caught me watching Encanto for the 12th time but can you blame me?’

Ever since I watched Encanto, not a single day has gone by without me thinking about We Don’t Talk About Bruno. I mean, how could it not – it’s the most catchy song ever and is ALL over TikTok, as well as being number one in the official UK Charts right now. It’s safe to say, the whole world is obsessed with this new film. I know it’s a kid’s film, I know it’s Disney, I know it’s probably lame, sue me! I don’t care, because every single song in Encanto absolutely SLAPS and not a single person on this earth can argue with that.

People all over Twitter have been obsessed with Encanto and We Don’t Talk About Bruno, making memes out of them as well as all the rest of the songs and characters. Everyone’s saying the same thing – Encanto absolutely bangs and the world is obsessed.

Here are all the best memes and tweets about We Don’t Talk About Bruno, and the rest of the Encanto film:

me looking over at my younger siblings when surface pressure comes on pic.twitter.com/Y9x2dvsmhM

the madrigal family at antonio’s party while casita was falling apart pic.twitter.com/BXNFL4cWI8

I know for a fact we all collectively have nothing on our mind except “7 foot frame, rats along his back” right now

"people can dislike whoever they want" WRONG. no one is allowed to dislike Bruno Madrigal. pic.twitter.com/2D3ZFdHz8m

me in public my headphones #Encanto pic.twitter.com/o1rcUtNT9R

I am not usually a big disney person but I've watched encanto three times in a week, this film is fucking amazing

14. Sick and tired of them tbh

16. Ok but we all know this song would absolutely SLAP

They didn’t give Dolores a solo song because they feared her raw power that would overshadow every song in the soundtrack pic.twitter.com/nzZozpkLSa

17. This song is going to haunt me forever

My brain: [silence]
My brain seconds later out of fucking nowhere: SEVEN👏FOOT👏FRAME👏 rrrRRRRAAATS ALONG HIS BACK—

• We Don’t Talk About Bruno, but we do talk about getting 10/10 on this Encanto lyrics quiz

• Every Encanto character has a gift, what would yours be? Take this quiz to find out

• Every single Encanto song, ranked by just how hard it slaps