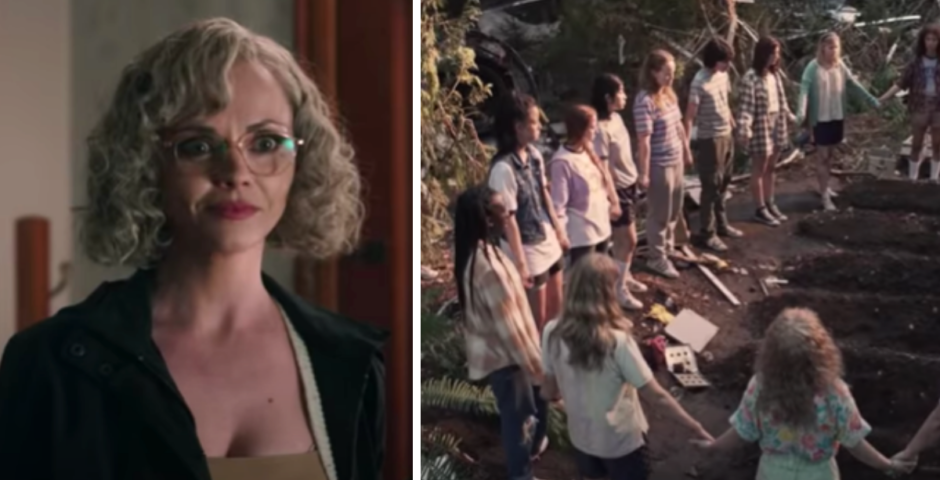 Okay so, what is Yellowjackets all about and why are so many people talking about it?

This week, people have been talking about a TV show called Yellowjackets and it’s got a lot of attention online. The series is only available to watch on Sky and everyone is pretty much saying how obsessed they are with it.

The show focuses on a group of high school female soccer players from New Jersey. They’re travelling to Seattle for a big sports tournament but whilst flying over Canada, their plane crashes somewhere in the wilderness. It’s been compared to shows like Lost and novels like the Lord of Flies. Here’s everything you need to know about Yellowjackets on Sky, just in time for your binge-watch ahead of the big finale later this month.

What is the plot of Yellowjackets?

So it’s set in 1996 and focuses on a team of New Jersey high school soccer players who travel to Seattle for a national sports tournament. Whilst flying over Canada, their plan crashes deep in the wilderness and the remaining team members are left to survive for 19 months. The series chronicles their attempts to survive while also tracking their current lives in 2021.

The Independent called it “a gender-flipped version of William Golding’s classic schoolboys-turn-savage novel Lord of the Flies”. Episodes are released weekly, the first one aired back in November in the UK but we have to wait until 23 January until we’re able to watch the season finale.

It’s been called the ‘most fun TV show in forever’

Out of over 50 reviews, Yellowjackets has 100 per cent on Rotten Tomatoes. The Guardian said it’s the “most fun TV show in forever”. And people on Twitter have been sharing some jokes reactions to the show, here are a few of the best ones below:

me talking about the yellowjackets finale pic.twitter.com/0HrWmhfWx3

3. Yellowjackets with no context:

javi while everyone is freaking out about jackie #Yellowjackets pic.twitter.com/RtW9O9jVHO

she deserved so much better #yellowjackets pic.twitter.com/LIoLqbVbpK

i just know misty and ma would have the craziest beef #Yellowjackets pic.twitter.com/P3B9J7RCRm

• 10 years on since the start of Fresh Meat, here’s what all the cast are up to now

• Euphoria love lives: Who exactly is the cast dating in real life?