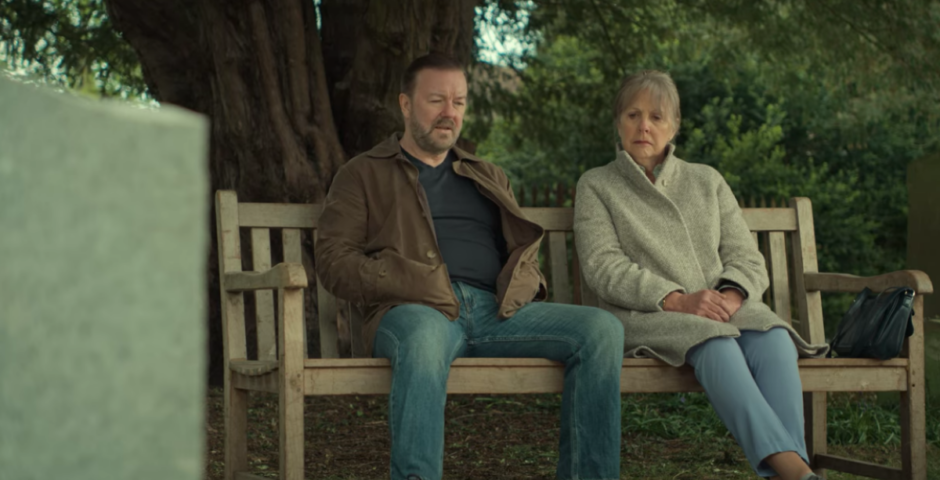 If you’ve watched even one episode of After Life on Netflix then you’ll know the importance of the bench in the churchyard which Tony often sits on to reflect on his grief and loss of his wife. Well Netflix recently revealed it has donated 25 benches to local councils around the UK as part of a mental health initiative celebrating the drop of After Life season three.

Reportedly, the benches were commissioned with suicide prevention charity the Campaign Against Living Miserable (Calm) and feature QR codes leading to online resources and a message of support. And you can actually go and sit on them yourself. Here’s a map of where you can find them:

Here's a map of where the benches are, so you can visit and take a selfie 👍 pic.twitter.com/MeiXvXnV0C

The benches will feature in locations across the UK including Bath, Kent, London, Manchester and Nottingham. The benches are also inscribed with a quote from After Life season three which says: “Hope is everything.”

Ricky Gervais, who plays Tony and also directed the show, said: “We hope the benches will create a lasting legacy for After Life, as well as become a place for people to visit, and we are thrilled to be associated with Calm and the great work they do.” And the Calm chief executive Simon Gunning has said: “Park benches provide opportunities to reflect, talk to someone, sit shoulder to shoulder with someone and get things off your chest. That is why we’re delighted to team up with Netflix to put benches in parks across the country – inscribed with that crucial line from the show, ‘Hope is everything’ – to help people have those conversations and to show it’s normal to have those feelings.”.

After Life is available on Netflix now. For all the latest Netflix news, drops, quizzes and memes like The Holy Church of Netflix on Facebook.

• After Life season three ending explained: Did *that* really happen and what does it mean?

• The Puppet Master on Netflix: The true story of Robert Hendy-Freegard and where he is now