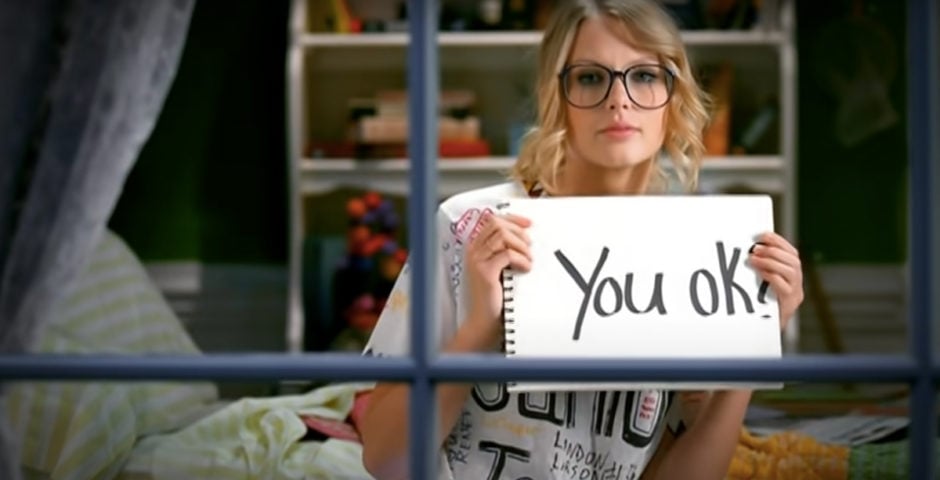 So who exactly has Taylor Swift dated over the years and which songs are about them?

It’s no secret that Taylor Swift likes to write songs about her past relationships, but there have been a few and it can get a bit confusing at times. We all know Red (Taylor’s version) had a big focus on Jake Gyllenhaal but what songs are about her time dating Harry Styles? Or Calvin Harris? Or even her high-school boyfriends?? Here’s a rundown on which one of Taylor’s exes had a song written about them:

So let’s are starting right at the very beginning with Brandon. He dated Taylor back when he was a senior and she was a freshman and then just like every school love story, they both went away to college and broke up. But that doesn’t mean Brandon got away without having at least one song written about him. In actual fact, Taylor wrote three songs about him, Tim McGraw, Our Song and Fifteen all about their relationship. Allegedly he now lives a normal life in America which quite iconic when you think he dated our queen Taylor Swift.

Drew was another high-school boyfriend who apparently had no idea Taylor wasn’t that keen on him. Or at least he didn’t clock it until he heard Teardrops on My Guitar. In the song Taylor sings, “Drew looks at me, I fake a smile so he won’t see that I want and I’m needing everything that we should be” – savage but we can’t not adore Taylor for it.

2008 was a stunning time because it was at the peak of Jonas Brothers obsession. People were so obsessed with them to the extent that Taylor and Joe couldn’t even go out in public together. But then Joe dumped her during a 27 second phone call and all hell broke loose. Taylor was in full swing and went on to do what she does best, write about her breakups in the form of a song. She wrote Forever & Always, Jump Then Fall, Today Was A Fairytale, Last Kiss and Holy Ground. One lyric that stands out from Forever & Always is: “Was I out of line? Did I say something way too honest, made you run and hide like a scared little boy?”

Taylor Swift and Taylor Lautner seemed like a match made in heaven back in 2009 after they met on the set of the film Valentine’s Day. Together, they were known as Taylor Squared because they shared the same first name but also because it was 2009 and everyone was obsessed with the aesthetic of being quirky.

Taylor Swift was 19, turning 20 and Taylor Lautner was 17-years-old when they broke up towards the end of 2009. Then in the autumn time of 2010, Taylor released her song called Back To December. Her fans were quick to notice it was most likely about Taylor Lautner, especially when she sang the lyric: “I go back to December all the time, it turns out freedom ain’t nothing but missing you. Wishing I’d realised what I had when you were mine.”

Taylor and John’s relationship happened in 2010 and was very brief. No one reaaallly knows what happened between them but feel free to read between the lines of her song Dear John because it hints that things weren’t too good. In the song, Taylor sings: “Dear John, I see it all now I was wrong. Don’t you think 19 is too young to be played by your dark, twisted games?” – BIG yikes.

So we all know Adam Young to be the lead singer of Owl City but hardcore Swifties know him to be the reason behind Taylor’s song Enchanted. They met once and then began emailing but it was all happening around the time Taylor started to date Jake Gyllenhaal so things never really picked up.

Jake was the man who skipped Taylor’s 21st birthday party and allegedly made her cry in the bathroom all night. So get ready for this one because there are a lot of songs to go through. First up is We Are Never Ever Getting Back Together, which we will just let speak for itself.  Then there is State of Grace, All Too Well, Red, The Last Time and Sad, Beautiful Tragic. And of course her latest album, Red (Taylor’s Version) features the ten minute long version of All Too Well.

The world was in standstill when Harry Styles and Taylor Swift started dating in 2012. Everyone wanted to know every single detail possible. We were so invested. In 2012, Taylor was growing on a mad level and Harry was soaking up all the glory of being in One Direction, they seemed like a perfect couple. But then things reportedly went downhill in early 2013.

A source told the Daily Mail Taylor and Harry had broken up after a few months together. They said: “They were on holiday and had an almighty row. They’re two young stars at the top of their game so who knows what will happen in the future.” Quite iconic when you hear Taylor allegedly went on to write I Knew You Were Trouble and Out of the Woods about Harry Styles.

Taylor and Calvin dated for 15 months but broke up in June 2016. Allegedly the song I Did Something Bad is about Calvin. According to Elle magazine, in the months that followed Taylor and Calvin’s breakup, he released two songs inspired by her. Then, in response, Taylor apparently wrote one about him.

• Right so what actually happened between Taylor Swift and Jake Gyllenhaal?