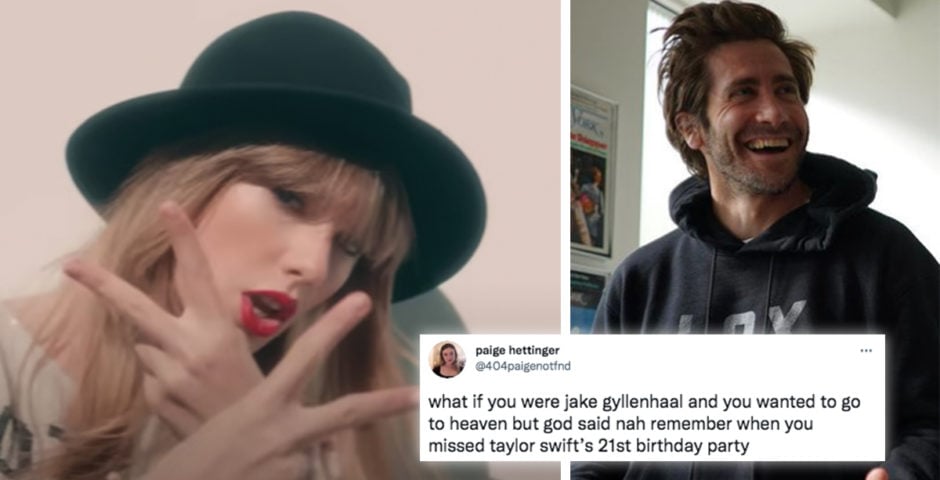 Right so what actually happened between Taylor Swift and Jake Gyllenhaal?

But now Taylor has released a new version of Red which was the album which Taylor has referred to as the soundtrack to her breakup. Meaning the internet is very much so in a big “fuck you Jake Gyllenhaal” phase and you’re probably experiencing a little bit of FOMO. So here’s a rundown of everything that happened between Jake and Taylor.

Taylor Swift and Jake Gyllenhaal dated for three months in 2010

Their relationship was brief but the impact it had has lasted well over a decade. They were first pictured spending time together during October 2010 and were together for three months before breaking up. Two years later, Taylor Swift released her album called Red. It included All Too Well and clubbing classic, We Are Never Ever Getting Back Together.

Also, Jake allegedly flaked out on Taylor’s 21st birthday party. A source told Radar Online: “The day before he was coming, no issues. But the day of, she doesn’t hear from him at all. No texts, no calls. Taylor thought maybe he was planning some sort of surprise. Nope. He didn’t show up and she locked herself in the bathroom and cried the entire night.”

Her fans, known as Swifties, have spent their free time digging for clues within the lyrics. She released All Too Well and her latest version supposedly reveals the reason for their split.

For example, their age gap is part of the reason for their breakup, at the time Taylor Swift was only 20 and Jake Gyllenhaal was 29. In the latest version of All Too Well, Taylor sings: “They say all’s well that ends well but I’m in a new hell every time you double-cross my mind. You said if we had been closer in age, maybe it would have been fine and that made me want to die.”

Another line in the song referred to a preference for a smaller age gap as a joke. Taylor sings: “And I was never good at telling joke but the punchline goes: ‘I’ll get older but your lovers stay my age.'” She’s so savage, I’m obsessed.

Swifties are currently out to get Jake Gyllenhaal

People on the internet have since been coming for Jake Gyllenhaal, one person tweeted: “Just read the lyrics to All Too Well and I feel gutted. How was Jake Gyllenhaal the worst boyfriend of all time yet still had the audacity to blame their breakup on the age difference? As if he wasn’t the childish one out of them? The nerve men have my gosh.”

Another Taylor Swift fan shared screenshots of the most recently lyrics to All Too Well and captioned them with: “Suing Jake Gyllenhaal for emotional damage on behalf of me and Taylor Swift because how the fuck am I supposed to emotionally recover from these lyrics?”

Suing Jake Gyllenhaal for emotional damage on behalf of me and Taylor Swift because how THE FUCK am I supposed to emotionally recover from these lyrics??? pic.twitter.com/MCoREPxhAw

Someone else tweeted: “What if you were Jake Gyllenhaal and you wanted to go to heaven but god said nah remember when you missed Taylor Swift’s 21st birthday party,” which helps to add up the claims she was left crying in the bathroom all night long.

Honestly the whole relationship seemed preeeetty savage. But I guess when you record your own version of your breakup album, it’s always going to pop off.

• Every Taylor Swift single painstakingly ranked from worst to best