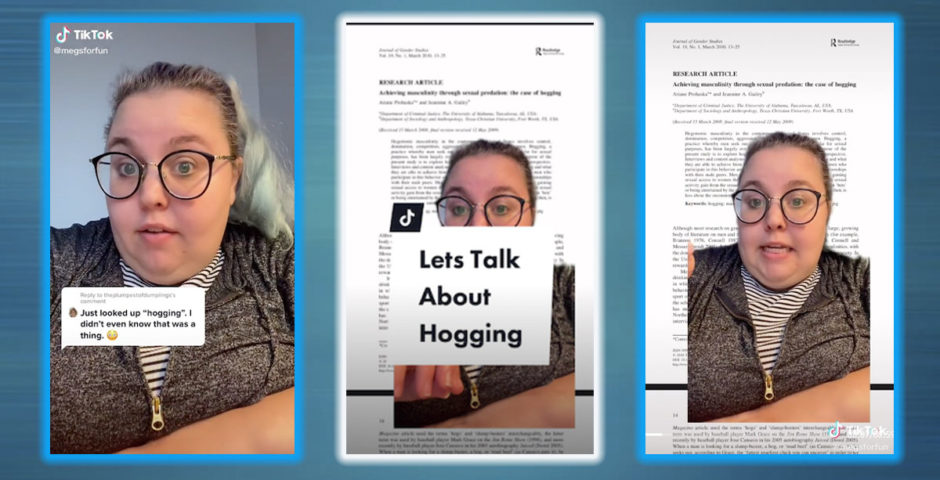 Why am I not surprised US frats do this?

We’ve all heard horror stories of initiations and challenges certain US university fraternities engage in and now one TikToker is highlighting a truly disturbing trend some US frat boys are doing – hogging. And no it is nothing to do with hogging the middle lane of a motorway. Instead it’s about the humiliation of women.

The practice isn’t anything new but TikToker Megsforfun has brought it to the attention of a whole group of people who have never heard of it.

The first entry of hogging on the internet was in 2002 and academic essays have even been written about it in the last 10 years. So what exactly is hogging? This is everything we know:

TikToker Megsforfun has highlighted the messed up trend in a TikTok where she explains it in more depth.

She said: “Hogging is a practice in which men will typically prey on fat women, and make bets with their friends about finding the fattest and most unattractive woman and having sex with her.”

Megan goes onto explain how sometimes the frat boys will then barge into the room and start oinking at the woman until she leaves.

She said: “Sometimes they will then, in the completion of having sex with her, have the entire group of men come barging in the room, and they’ll start oinking and harassing the woman until she leaves that space.”

Megan’s video has now had over 1.4million views and thousands of comments from viewers expressing their disgust for the trend.

How long has hogging been happening?

Though Megan’s video explaining the trend was only posted last month, hogging is a pretty old US university tradition.

Entries explaining the trend on Urban Dictionary have been there since 2002.

In 2018 a hogging incident allegedly occurred at Cornell University in New York where members of a frat house reportedly had a “pig roast” where the male students competed to sleep with women they deemed “overweight”.

And in 2017 here in the UK there was an incident related to hogging where one woman was a victim of a sick game called “pull a pig”.

The so called game involves a group of friends competing to pull the least attractive person and then standing them up.

Sophie Stevenson travelled 400 miles to Amsterdam where she believed she would be meeting up with a man only to be messaged saying she had been “pigged”. Her date never showed up and she was left humiliated and very upset.

Have you experienced or witnessed hogging at your UK university? Get in touch in confidence by emailing [email protected]

•Can you cook pasta in a kettle? Debunking the chaotic TikTok trend

•Ok so who is the baby in that viral TikTok shoulder wiggle dance video?