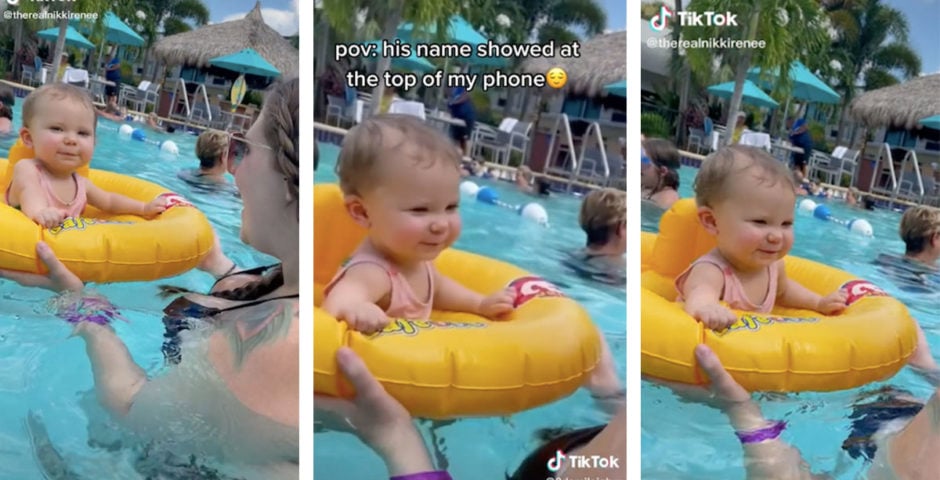 Ever get a text from that certain person and it makes you do a little happy dance? You know the one I mean with a shoulder wiggle and a big smile on your face? Well now there’s a baby on TikTok who does it perfectly and it’s safe to say everyone is collectively obsessed.

It feels like every other video on my For You Page is that baby wiggling her shoulders whilst sat in her floatie in a swimming pool. And people are taking the video and combining it with a caption usually about that one guy you like or when someone does something nice. It could be when “his name pops up on your phone” or “when he kisses your forehead when you’re sleeping”.

People either stitch the video with their own face looking happy about the moment or simply caption it above the baby. Some of the videos have received millions of views, but who exactly is the baby in the original video?

Who is the viral TikTok dancing baby?

The baby who has captured the internet’s attention is one year old Laine. Her mum Nikki Johnston is responsible for catapulting her daughter into viral fame.

Nikki has a TikTok account called therealnikkirenee with over 300,000 followers and regularly posts videos of Laine doing the signature shoulder wiggle dance.

The original video of Laine and her mum in the pool now has nearly 12 million views and was first posted over the summer. It has over 9,000 comments with everyone getting excited they’ve found the original wiggle dance video.

Laine lives with her mum and the rest of her family in Florida. She also has an older brother who is three years old.

Seeing as Laine is only one there isn’t loads to know about her however an important thing to note is the shoulder wiggle wasn’t just a one off.

Laine is regularly recorded doing the wiggle dance in many different moments including sitting in her highchair and at taco Tuesday. She’s a girl after my own heart.

•Debunking Unsent Messages: The website where you can send texts that are never received

•Okay so what does it mean to have a ‘no bones day’ and why is it all over my TikTok rn?

•Right so who the hell are Libby Mae and Katylee and why are they all over TikTok rn?