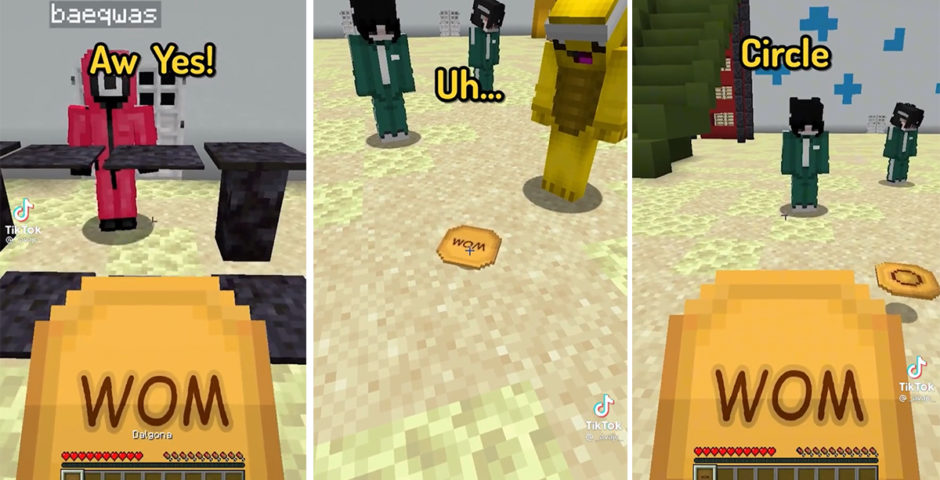 TikTok churns out viral sayings all the time and the latest addition to the list is “wom”. Tons of users have been saying the word and comment sections are full of people just saying wom and nothing else. You’re probably wondering what the real meaning of wom is and why it’s all over TikTok right now – both are very good questions. The real meaning of wom hasn’t formally been announced on TikTok yet but a lot of people are speculating. Here’s everything you need to know about wom and where it came from:

Wom was created by a Minecraft gamer

Ok, you might think Minecraft is lame but this TikTok trend has actually been viewed over 76 million times. So if you think you’re too cool for Minecraft, there are millions of people who are ready to fight you over your Minecraft slander – tread carefully.

TikToker and Minecraft gamer, AvaJC, started using the word wom and now it’s spread all over the platform. Ava is a 17-year-old Australian content creator, she seems to be absolutely obsessed with Minecraft and has just reached two million followers on the platform. Her comment section on TikTok is full of people sharing ideas about the meaning of wom, and here are the most popular ones:

The comment section on Ava’s wom video is full of people speculating it’s meaning. One person said: “Wom could mean World of Minecraft or we own Minecraft” – both very good ideas.

Someone else said it means “Winning in Minecraft,” which doesn’t actually make sense because it’s wom not wim.

One of Ava’s two million TikTok followers went over to Twitter and proposed this very philosophical question: “What if wom is a word that Ava created telling all her followers to say it and when it gets revealed what it means it just means something weird and we all said it.”

But Ava tweeted saying “Wom is wom” which doesn’t give us much clarity. But, she did also say that once she hits 100,000 subscribers on YouTube or 200,000 followers on Twitch, she’ll reveal the true meaning of wom. SO GET FOLLOWING, PEOPLE!! I’m losing sleep over not knowing the true meaning of wom on TikTok.

• Right so who the hell are Libby Mae and Katylee and why are they all over TikTok rn?

• Debunking Unsent Messages: The website where you can send texts that are never received