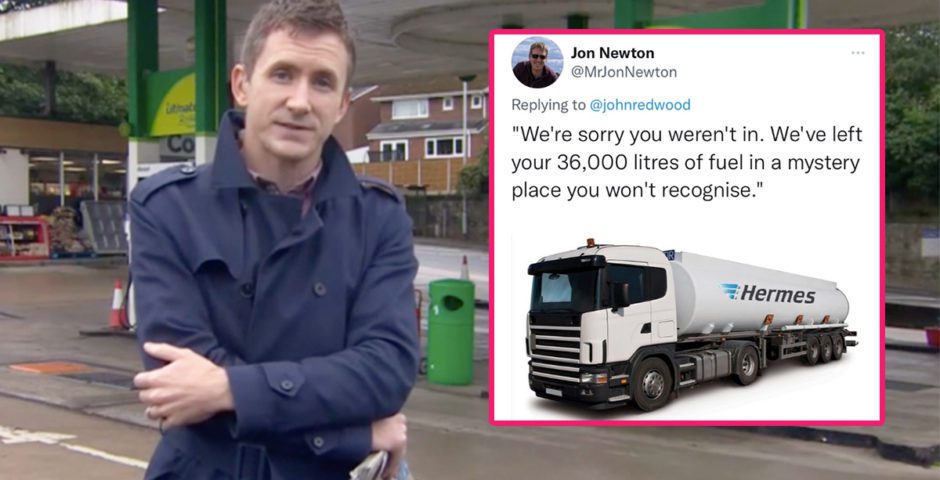 This whole thing is a fever dream, someone please make it stop

The UK is in the midst of a supposed fuel crisis and it’s sent this silly little island into complete and utter chaos. A lot of petrol stations were left high and dry this weekend due to people panic buying. The whole thing basically feels like one big fever dream and naturally people on Twitter are dragging those out panic buying by using memes.

Everyone first lost their mind when a BBC reporter named Phil McCann (fill my can) did a live report inside an empty station with no fuel. And then people continued to bully anyone else who was pictured queueing for petrol. It’s all very jokes. So let’s add some fuel to this fire and show off some of the best memes about the petrol crisis:

1. I don’t even have to play this video to know what is said

2. This is peak British humour

Just filled the car up with petrol.

3. Would you look at all of those sheep!!

Just been past the local petrol station.. pic.twitter.com/hvjJRIYIQt

4. Not to mention people keep smacking into you!!

Had to abandon my car. Absolutely ridiculous.

6. The government really does love adding fuel to the petrol crisis fire

Not sure why this car is queuing for petrol? pic.twitter.com/fGHwkT3hsg

‘So how did you guys meet?’
‘At an ESSO during the petrol crisis, he gave me the last pump, I knew straight away he was the one’

The correspondent the BBC sent to cover the petrol shortage this morning is called Phil McCann pic.twitter.com/t64piutcg6

13. This is a stunning mode of transport

There was a massive cue outside the petrol station this morning. pic.twitter.com/5yk4SovonZ

15. Boris Johnson is such a hands on prime minister

“This petrol shortage got me thinking about how you were my fuel. Life’s too short and we should really just refill our tank before it’s too late” pic.twitter.com/ASca4eRMap

17. The battle between car and bike ends here

My take on the petrol crisis pic.twitter.com/bg9FkTRTz3

• University staff are voting on whether they should strike this term