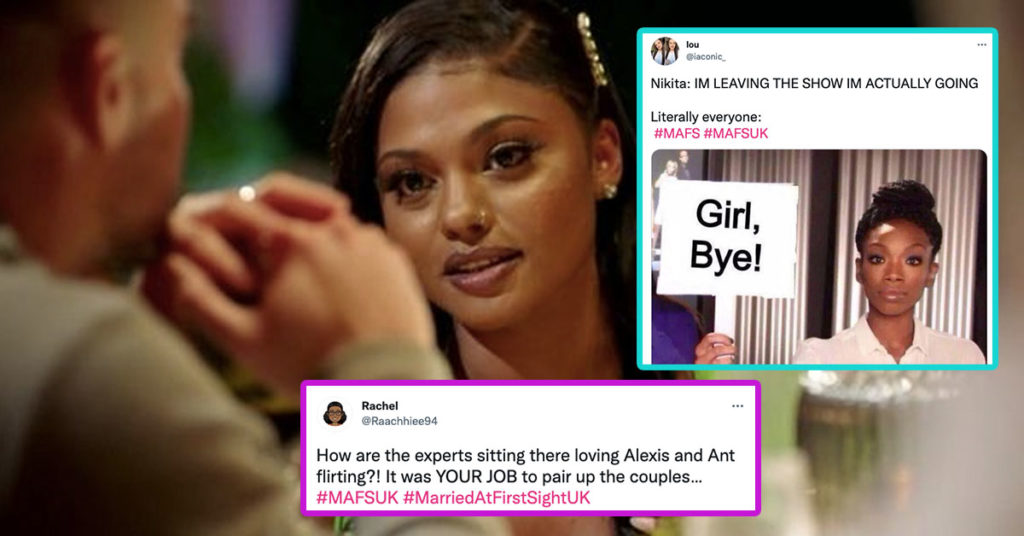 Just wanna know is Megan planning on asking everyone if they’re in love?

Last night’s episode of Married at First Sight UK provided more drama in 60 minutes than Love Island did in the entire last season. There were tears, declarations of love and a contestant being dragged away by security. Basically it was straight up chaos and the memes were perfection.

The episode featured the eight matched couples returning to the UK after their honeymoons and moving into a block of flats. The drama then began when they had their first group dinner party of the series and they finally all got to reunite.

Megan was asking every couple if they were in love, only to be left in tears when she realised everyone was happier than her. Daniel and Matt didn’t turn up, leaving everyone wondering if they left the show until Morag received a suspicious phone call from the couple. And of course the biggest drama came from Nikita interrogating Jordon over his treatment of Alexis resulting in Nikita being dragged off by security. Then in the biggest plot twist of all Ant and Alexis began flirting and the internet has found its new favourite couple.

If that drama wasn’t enough for you then please enjoy these 21 Married At First Sight UK memes which perfectly sum up the chaos from last night:

1. I am so here for this pairing

Ant and Alexis… I’m not mad at it #MAFSUK #MarriedAtFirstSightUK pic.twitter.com/qAJ2EX6PiT

2. He is too pure for this world

3. I don’t like Nikita but I appreciated that moment

How the experts make the matches #MAFSUK pic.twitter.com/8D4IynNSj2

6. You could have made this happen from the beginning

How are the experts sitting there loving Alexis and Ant flirting?! It was YOUR JOB to pair up the couples… #MAFSUK #MarriedAtFirstSightUK pic.twitter.com/LpchNWAYPn

7. Appreciating this self love from Bob

You should, Bob. You should. #MAFSUK pic.twitter.com/XCFpzhDuMZ

Bob standing next to Megan while she repeatedly tells everybody how awful he is #mafsuk pic.twitter.com/y1GD1op2vw

12. I love him but this was not the way to Megan’s heart

I mean, I like Bob but he doesn’t help himself does he? Fuck me.🤦🏽‍♂️ #MAFSUK pic.twitter.com/t2Kbtg3Usk

Nikita: “I wouldn’t trust anyone who I have only met once..”

17. Just here for the drama

This guy is loving his life. Watching the drama & just kicking back. #MAFSUK pic.twitter.com/305WXSae0h

Me when Franky was discussing what him Marylise had been up to #MAFSUK was as if someone’s dad showed up & crashed the dinner party! pic.twitter.com/47hvYUyQ8m

19. Just get with Alexis now please

Is Megan planning to ask every single couple if they’re in love? #MAFSUK