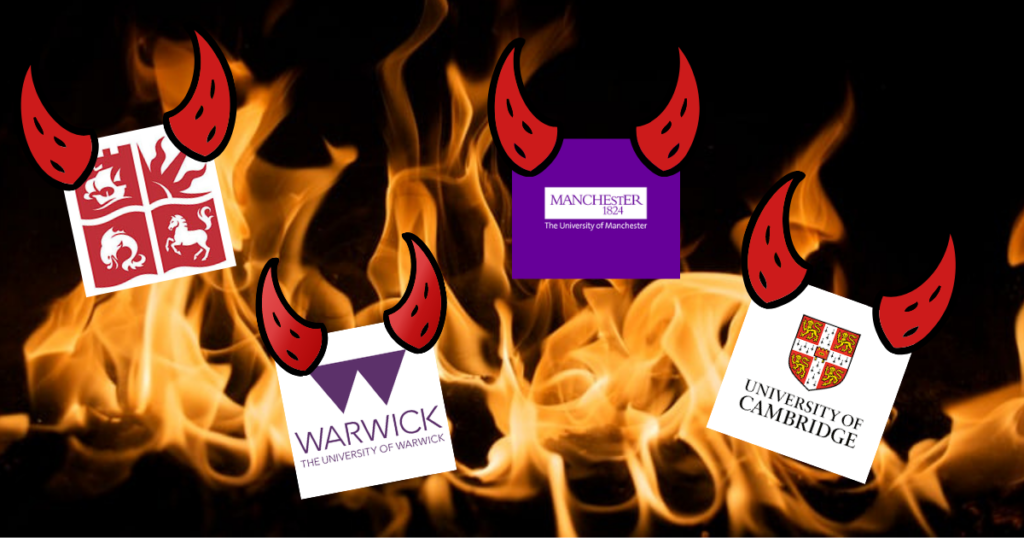 This is the only uni league table that actually matters

Going to uni during the middle of a pandemic was never going to be great, but these evil unis in particular have seemed to have gone out of their way to make their students’ lives miserable.

As if paying thousands of pounds for Zoom classes and the privilege of being trapped in halls wasn’t enough, unis have tried us to our absolute limits.

They’ve fenced in students, threatened rent strikers with bailiffs and banned Pride flags. When you’re on a six-figure salary it seems like you can get away with just about anything.

These are the uni’s who’ve acted the absolute worst this year.

Cambridge are always at the top of the league table but this time it’s for slightly different reasons. In April, Jesus College decided to tell its students they were banned from hanging Pride flags from their windows.

The college argued the “time for commemoration” was over after the end of LGBT history month.

The college proceeded to threaten students with eviction, stating if students didn’t take flags down by the April 22nd, it could result in their license agreements being terminated.

Imperial College accused of cover-up over claims of bullying by president https://t.co/I6yjDldokf

In December, both the President and Finance Chief of Imperial College were forced to admit they bullied staff at the uni. They’ve remained in their post despite both facing no-confidence motions from staff.

Now, the Office for Students has opened an official investigation into the matter. 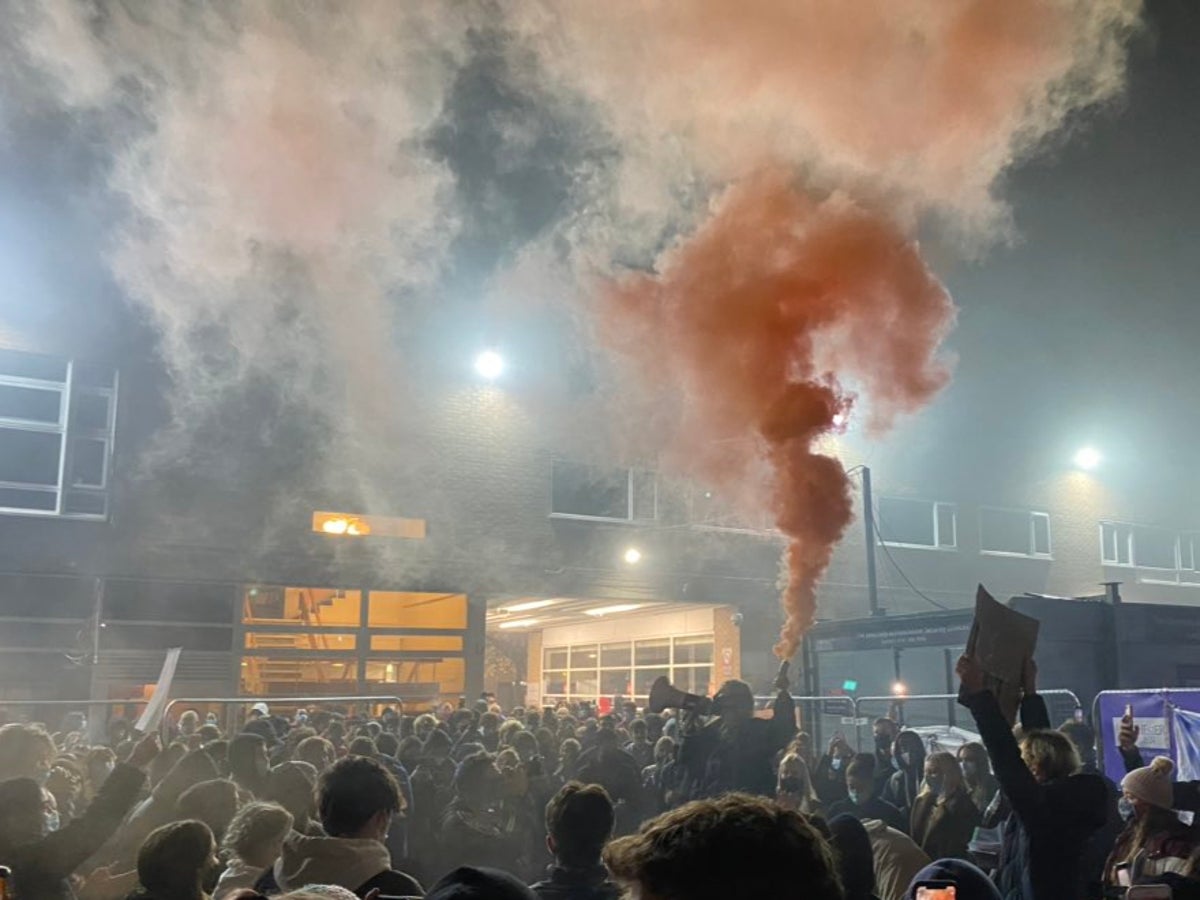 If you want a guide on exactly how NOT to run a university during a pandemic, look no further than UoM Vice Chancellor, Nancy Rothwell. It seemed at one point that the uni was in the news for a different PR disaster almost very other day.

First, they decided to build a massive barrier fence around student halls (eventually torn down). Then a two-week occupation and rent strike forced the uni to concede millions in rent rebates for appalling accommodation conditions.

One student at the uni was “racially profiled” by uni security. In a separate incident, two guards were charged with racially aggravated assault which they denied when they appeared in court in May (the uni was forced to investigate a total of five guards at the uni this year).

A spokesperson for Manchester Uni said: “As is usual, our internal processes remain paused until the outcome of the legal case. Due to the ongoing legal proceedings, we are unable to comment further.”

On top of that, Vice-Chancellor Rothwell was forced to apologise after claiming to the BBC that she had written to the student involved in the racial profiling, when in fact she had not.

The uni has continued to face protests and in March 89 per cent of students voted that they had “no confidence” in Rothwell and her management.

Further to my email from this morning; I apologise for the unwise choice of words in my earlier message. As I understood it, the aim of today’s protest was to bombard all University enquiry points with high numbers of messages so as to disrupt our operations.

Things got really weird at the University of Exeter when the uni’s Head of Education Service, Jamie Horsley said that students organising an email protest were comparable to “cyber terrorism”.

Their social media team also had a bit of a mare when they deleted an Instagram post about mental health because the comments were flooded with students asking about the lack of a no-detriment policy.

At the time, Horsley said: “I apologise for the unwise choice of words in my earlier message. As I understood it, the aim of today’s protest was to bombard all university enquiry points with high numbers of messages so as to disrupt our operations.

“For the Education Services Teams, this would mean we were unable to respond to enquiries from students who may need urgent help. Supporting our students is our priority at all times.

“I understand that the Deputy Vice-Chancellor and the Education team have been working with student representatives on our policy and hope to communicate this in the next day or so.”

Many thanks to Leicester’s management for spreading the word about the global boycott.

University management at Leicester decided it was okay to threaten over 100 staff with redundancy in the midst of the pandemic.

Now, staff are refusing to mark work and have launched a global boycott of the university, with academics from across the world refusing to visit or work with the uni.

'HMP MMU' – Students claim they were met by 'security' and 'police' as they tried to leave Coronavirus crisis halls https://t.co/KkDFYEmPQF pic.twitter.com/zaMQBdLdnZ

MMU was one of the first unis to be truly rocked by Covid when entire halls were placed into quarantine with security guarding all entrances.

Members of the UCU then passed a motion calling for the Vice Chancellor to resign, who of course refused.

After meeting with us last Friday, @BristolUni management is still refusing to grant rent reductions and would rather pass on debts and let students pay the price.
We're still striking and we'll ensure that students get what we deserve from our uni https://t.co/46ESj2f2Ml

The University of Bristol saw one of the biggest and most successful rent strikes this past year but it hasn’t come easy.

The uni first threatened to cut the bursaries of disadvantaged students on rent strike before being forced to u-turn.

Then they threatened to call bailiffs on their own students who were still rent striking. This is easily one of the most aggressive approaches taken against the wave of rent strikes that have spread across unis this year.

How do feel about your security assaulting students @sheffhallamuni ? pic.twitter.com/a4jp6snyR2

Another rent strike, another scandal. During an occupation at the uni, a student was “thrown to the ground” by security. Maybe not the best way to demonstrate a commitment to free speech.

A spokesperson for Sheffield Hallam said at the time: “We are also aware of an incident that occurred on Thursday evening at the Cantor building involving a protestor and security officer, and are investigating this.”

🚨 The closure of the University of Sheffield's @unishefarch would be a devastating blow.

The University has a very high profile in the archaeological and academic world and has made huge contributions to the country's higher education profile. (1/4 ) pic.twitter.com/SD3oSvfn2Q

Not to be outdone by their city neighbours, the University of Sheffield also had a tough time with protestors. In the end, they took legal action against student protestors and threatened them with court orders if they didn’t leave.

Now, the uni has been rocked by controversy around proposals to cut the world-renowned archaeology department.

The rape group chat scandal in 2018 rocked Warwick and issues around sexual harassment have persisted, including allowing a student who admitted sexual misconduct to return to campus.

Students at the uni this year launched an 11 week-long occupation and protest at the uni, as part of the group Protect Warwick Women.

Only now has the occupation come to a close with the uni finally agreeing to mediated talks with the group.