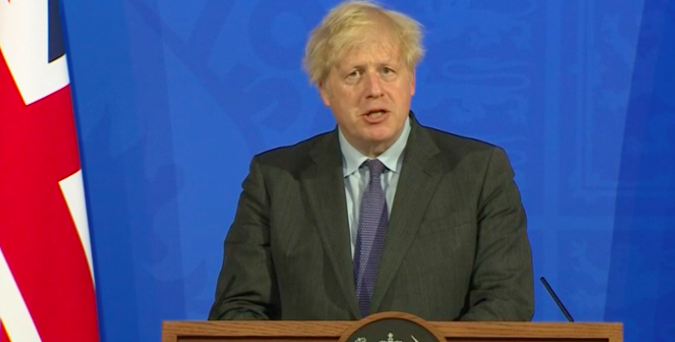 Boris Johnson has announced a four-week delay to the planned 21st June reopening in England.

However, 23 and 24 year olds will be invited to book jabs from tomorrow, with Boris Johnson unveiling an ambition to give all adults a first dose of the vaccine by 19th July.

A review of the lifting will take place in two weeks, with the possibility of a reopening happening before 19th July.

The delay means nightclubs will remain closed, while pubs, sports events and cinemas will continue with reduced capacities.

The limit on meeting people at home will remain at six people, or two households, per current restrictions.

“There are still millions of younger adults who have not been vaccinated, and sadly, a proportion of the elderly and vulnerable may still succumb even if they have had two jabs,” Johnson said.

“That is why we are so concerned by the Delta variant.”

In a televised press conference, the prime minister confirmed reports that current rates of the virus mean the original date would not be possible.

“We can give the NHS a few more crucial weeks to get those remaining jabs into the arms of those who need them,” he said.

Despite 41.7 million people in the UK receiving at least one dose of the vaccine, as of yesterday, concerns over the Delta variant have led ministers to sign off on the delay.

• Students shouldn’t have gone back to uni in September, says Dominic Cummings