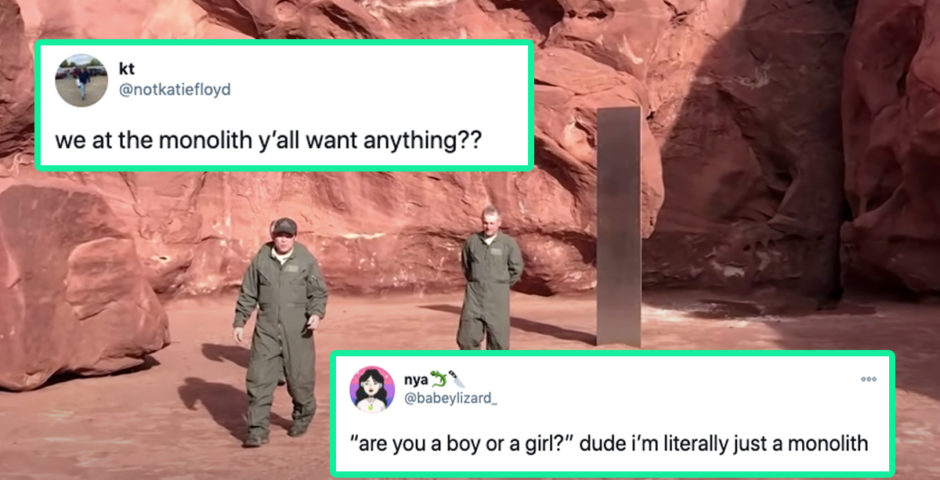 What are these god damn monoliths and where do they keep coming from?

Another day another monolith

First off, a couple of days ago I didn’t know what the word monolith meant. That was back when I was happy. At peace. Serene. But now not only do I know what monolith means, I am routinely asking questions like: Where are all these monoliths coming from? Where is the newest monolith? Did aliens create these monoliths? Maybe I am a monolith? I just want these god damn monoliths explained so I can rest.

Luckily, in a kind of deep-dive web hole frantic late-night search, I answered all of these questions for myself and I’m going to share this knowledge with you, as well as some fine monolith memes. Let’s tackle this together. Take my hand, we’re monolithing.

the monolith has fallen down the stair at the met gala pic.twitter.com/IZDYB9d3KF

What is a monolith?

Turns out a monolith is just a big rock. Yeah, I know. Underwhelming, no? Also turns out other monoliths include the big Easter Island stone heads and stone henge. So yes, rocks. “But these monoliths I’ve been seeing in the news and on my Twitter feed are real shiny”, you say to me. You’re not wrong.

The definition of a monolith is: “a large single upright block of stone, especially one shaped into or serving as a pillar or monument.” So I guess they can be shiny too. Anyway let’s get to the shiny ones and why they’re appearing everywhere.

Has anyone tried cutting into the monoliths to see if they're secretly cake?

Why is everyone talking about these monoliths?

A monolith cropped up in Utah at the end of last month and perplexed people. It was just a shiny tower, not doing anything, just stood there in the middle of a remote part of the US state. A bunch of state troopers found it while sheep counting (cute) from a helicopter (risky if you fall asleep and fall out of the helicopter imo but go off I guess).

Then, more monoliths cropped up in the Netherlands, Romania, and most recently the Isle of Wight yesterday.

welcome to McDonald's what can i get you? pic.twitter.com/iIgd8J5QIW

Where do the monoliths come from and tell me straight – is it aliens?

Most likely no. The general consensus is that they are the work of sculptors and then copycats all across the world, which would make sense as to why they’re so spread out globally. Unless of course there’s a monolith Banksy out there right now transporting some phat metal tubes to different continents. But that seems like a lot of effort for people to just presume it’s the work of aliens. Much like the pyramids.

The Utah Department of Public Safety issued a statement saying there is “no obvious indication of who might have put the monolith there”. A prank group tried to take credit and sell their own monoliths for $45,000 but were quickly found out. They were also responsible for the “Hollyweed” sign.

Where do the monoliths go (cotton eye Joe)?

The monoliths actually disappear quite quickly after they arrive, which is spooky. Apart from the Utah one, which internet fiends worked out may have existed since around 2016 (Google Maps is a fine tool) despite only being discovered on November 18th. But its four-year reign ended when it was eventually dismantled by some men for “environmental reasons” so it’s gone now too.

Then the Romanian monolith appeared, only to disappear days after, on December 1st. This has no obvious links to the festive season or Father Christmas/a St Nicholas figure but I’m not convinced.

A monolith has been spotted on the Isle of Wight – days after similar structures were discovered in the US and Romania https://t.co/OtUnQXkgal

A third monolith appeared in California days after on a hiking trail and then a bunch of men took it down while chanting. Then one is Las Vegas, then the Netherlands. At this point the monoliths are becoming more central and less remote, so people are generally speculating that they’re placed there as a kind of stunt or sculpture project because of the other monoliths’ fame. (They’re jealous).

Overall, not much can be said about this strange coincidence or trend other than the fact that we’ll all look back in a year and go “yeah guys do you remember those uhhh fuckin’ uhhhh monolith things?” and I’m okay with that.