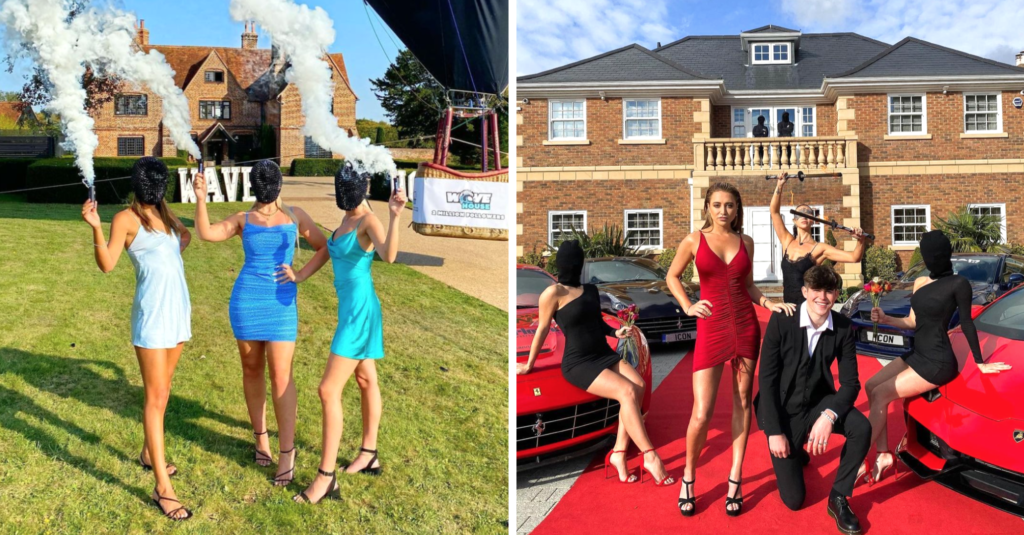 You can see creators’ lives changing quite quickly in front of your eyes when you follow their progression on TikTok. Charli D’Amelio, for instance, has levelled up between multiple houses in her TikToks in the last year and has started hanging out with other high profile creators such as James Charles due to her astronomical rise to fame. It’s easy to see that people are increasingly making larger and larger piles of money through TikTok, but there’s now a way creators are enjoying a fast track to the benefits of TikTok fame – and that’s by joining one of the UK TikTok houses.

The premise is that an agency will rent you a luxury property to live in free of charge with a load of other creators, on the promise that you hit a quota with the content you’re making (which, with all that space and luxury, doesn’t seem to be too hard). This is an increasing trend in the UK, where literal teenagers are moving into humongous mansions, so here are the most obscene ones.

Previously called My House London, the group has recently reformed as The Icon house, and it’s certainly the group making the biggest splash right now – even though it hasn’t even revealed all of its members yet.

Utilising a similar style to The Wave House, they are revealing members one by one with a load of extravagant and high-budget videos. They even shelled out by paying Love Island B-listers to do so!

They’ve only put up three videos on their TikTok account so far, yet have garnered nearly 230k followers, so it’s fair to say that they’re definitely worth watching over the coming days.

Tag who you think is behind the masks… 👀🌊 FIRST REVEAL TOMORROW

As you can see, The Icon House has borrowed a lot of creative influence from The Wave House, from the whole facemask thing to the dress sense. Shit, even the house looks pretty much exactly the same.

Consisting mostly of people you haven’t heard of, the only notable member is controversial (and that’s a nice word for it) YouTuber TouchDaLight. If you want to catch up with some of the ridiculously stupid shit he’s done in the past, watch JaackMaate’s video about him.

The Daily Mail reported that the house is worth a huge £5,000,000, which is hardly a surprise when looking at the sheer size of the place.

You’d be forgiven for thinking that this is some ultra-modern pad in LA neighbouring the big American content houses by the looks of its modern glass and exposed rusted metal, but it is in fact situated in Dublin, Ireland. It is rented by 10 creators – Thomas Arnold, Jake Browne, Lauren Whelan, Andrea Camila, Lewis Kelly, Ryan Mar, Shauna Davitt, Nia Gallagher and Leila Ecker.

Again, a model has been applied that tries to make internet celebrities overnight, as not many people seem to be aware of who these influencers are on an individual basis, so not a lot can be said for them.

Just another day in the go house 🏹🚦

One thing that can be said is that this place is nice. Looking over to the books at the back, there’s no way these millenial scoundrels pursue old-timey LOSER activities like reading, so either a professional interior designer has come in to decorate the place or they’re renting from someone who has left it furnished.

Unfortunately, the gang have already suffered a couple of controversies since moving into the luxury house, and it looks like they may even be on their way out already.

In a particularly unenthusiastic video, they address the Irish media coverage regarding the disparate age gaps between the members. One chap declares that he’s 29, so my guess is that they’ve got people a fair bit younger at the age of 18/19 – although there is no evidence of any media coverage based on their ages after a quick Google search.

When you see it, you see it pic.twitter.com/8KMJItGGaC

Then, a Daily Mail article suggested that they may be kicked out of the house for a TikTok in which there appeared to be two people having sex in the background (above). Tut tut.

Next up is Bytesquad, the group regarded as the first TikTok house in the UK. Some notable and longstanding TikTokers make up this collective, and although it hasn’t been revealed exactly where the house is located, we do know that it’s somewhere in “central” London.

In our value of TikTok houses article we predicted that, based upon average house prices in outer London for five to six beds with a small garden, their house could be worth anything from £800,000 to £2,000,000.

BYTESQUAD X MILLIE B GIVEAWAY!!! To ENTER our giveaway and be in with a chance of winning a gift bundle worth £500 (No sponsors – its from us!) then follow the steps below:⠀ ⠀ 🔹 Follow our @bytesquadhq TikTok ⠀ 🔹 Duet with one of our Millie B TikToks using the hashtag #bytexmillie⠀ ⠀ You must complete all of the above to be in with a chance of winning the giveaway. We will be checking 👀⠀ ⠀ Good luck!⠀ ⠀ *ENDS 07.10.20 at Midnight* ⠀ ⠀ * This giveaway is not a paid partnership and is in no way sponsored, endorsed or administered by, or associated with, TikTok or the brands in the giveaway. The winner will be picked at random.⠀

Bizarrely, they recently did a collab with BG Media superstar Millie B. Good to know that Millie is FINALLY chasing some of the bag that Bella Poarch took from her.

Finding The Last Jet House Member 🏠🌴 Most Tagged Creator Will Be The Final Member!! GET TAGGING ❤️

You haven’t heard of The Jet House, and judging from the number of followers they have on Instagram (a MEASLY 8.5k) not many other people have either. Although not based in the UK, The Jet House are a bunch of Brits living in a Spanish villa, because why not!

Why don’t they have many followers? Well, it’s probably because they make some slightly questionable content that just doesn’t slap as hard as a load of supercars parked on a country lawn – such as this Harry Potter TikTok:

Recreating Harry Potter 😱 (Did We Nail It?) 😅

Luckily for them, they’ve got a pretty nice big villa in the middle of nowhere to fall back on. I’m very wary of their claim that this is the biggest TikTok house in Europe, having seen some of the monstrosities above (unless they’re talking members-wise, which still makes the claim incorrect), but whatever you say. x

• Ranked: The most unexpected TikToker relationships of all time

• Who is Pandagirl.94 on TikTok and why is she obsessed with bargains?