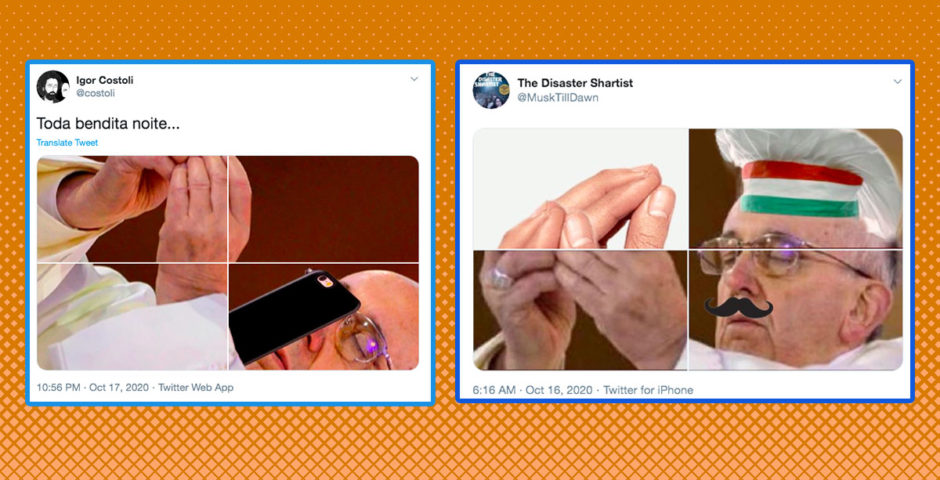 Pope memes are back in our lives and this time they’ve been given a serious upgrade. In the last few years they’ve just been Pope Francis holding up CDs that are usually pretty cringe or embarrassing. But now Twitter users have taken the memes to the next level with a resurgence taking place in the memes this weekend.

Not content with just holding up albums, now Pope Francis is holding the Nintendo Dogs DS game, Sophie and Pete from Gogglebox and Jason Derulo falling down the stairs. There is even more variation, with some making memes that have added moustaches or a phone falling on the Pope’s face.

The original image of Pope Francis was taken in 2013 and featured the Pope holding a Eucharist wafer up. The photo was then uploaded to Getty Images, and what a gift this image has been to us all.

These are the 21 funniest new Pope memes taking over Twitter right now:

1. Nothing better than this OG game

2. What would Gogglebox be without these two?

3. The power you had whipping one of these out

5. HAhahaha hate when this happens

6. He really is there to catch us when we fall

BREAKING: Jason Derulo is falling into the Pope’s hands pic.twitter.com/iu4UhkNGLF

8. Even the Pope enjoys a game of Uno

Me at the mall pic.twitter.com/unexHpd9gG

16. What a blessing Greggs has bestowed upon us

i'm so fed up with that pope meme pic.twitter.com/y16bdCNujo

We must milk the pope meme for all its worth pic.twitter.com/WcuzxKnGgG

21. Hahha what a gift the Pope meme is

•Girls are sharing what gives them the ick, and some of them are absolutely ridiculous

•Ok, so who is behind the ‘are you not embarrassed?’ audio on TikTok?