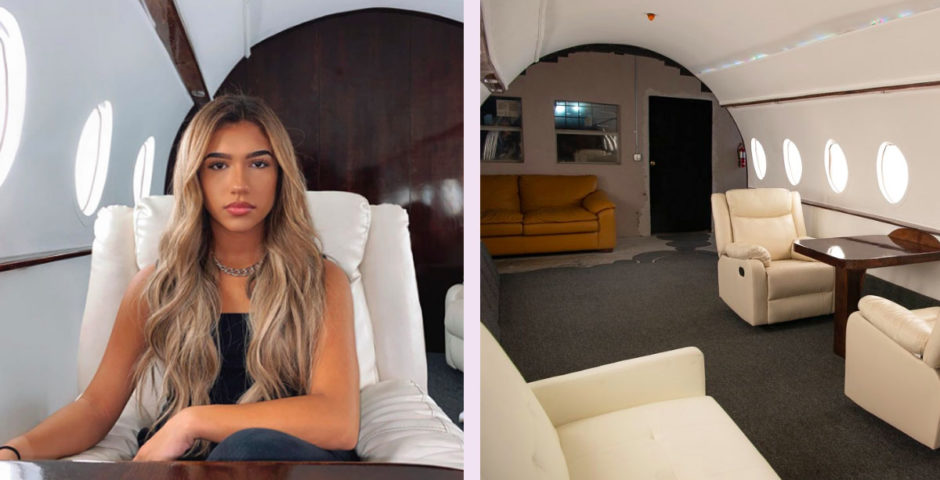 We all know things are exaggerated on Instagram and influencers have no problem staging and editing photos to make their lives look better than they are. Shopping sprees, beaut apartments and flying on private jets to their next holiday. Except for a lot of them it turns out that jet is 100 per cent fake and is in fact a set in Los Angeles.

Twitter user Maison Melissa shared images of the set many influencers use to stage boujee shots and said how shocked she was by it.

She wrote: “Nahhhhh I just found out LA ig girlies are using studio sets that look like private jets for their Instagram pics. It’s crazy that anything you’re looking at could be fake. The setting, the clothes, the body… idk it just kinda of shakes my reality a bit lol.”

Nahhhhh I just found out LA ig girlies are using studio sets that look like private jets for their Instagram pics. It’s crazy that anything you’re looking at could be fake. The setting, the clothes, the body… idk it just kinda of shakes my reality a bit lol. pic.twitter.com/u0RsOnyEEk

The set looks a lot less glamorous than how the influencers make it look, probably pretending to be on their way to Bali. There’s a basic sofa and set at the back of the jet picture listed on Peerspace‘s website, where influencers can book the set.

The faux jet is based in LA and you can rent it for $64 (£50) an hour in order to make everyone jealous of your jet setting lifestyle.

Since the original tweet has come out many people have been “exposing” influencers who have used the set sharing pictures of them appearing to “live their best life”.

Ain’t no way this just popped up on my explore page pic.twitter.com/dhfHpGAeCz

One user shared a picture of an influencer who had taken a picture in the set and captioned it: “Ain’t no way this just popped up on my explore page”.

The influencer in the picture María Isabel, replied back to her saying no one is claiming to have a private jet and it was used for a video recording.

She said: “Nobody here is pretending to have a private jet. we filmed content for a project called STUCK IN THE SKY and therefore booked an AIRPLANE SET. but talk your shit xoxo”.

Some influencers who used the set, have since told followers that it was just a set, including Azra Mian who has nearly 100k followers on Instagram.

This isn’t even the first time someone has been caught out pretending to be flying on a private jet. In 2017 rapper Bow Wow posted a picture of a private jet he said he was going on and was then pictured on a commercial flight. Awks.

•An influencer posted a job ad for an assistant, and it looks like absolute hell