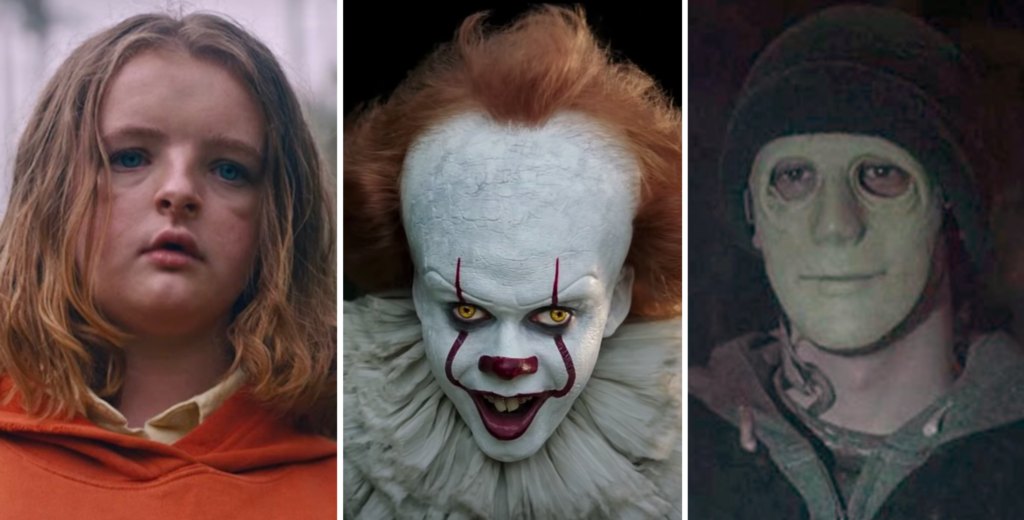 How often do you find horror films on Netflix that you KNOW are going to be good? Yeah, they shoehorn them all into certain categories like “critically acclaimed” or “popular” to try and make things easier but it just… doesn’t. Quite often the worst films have really good trailers and vice versa, so it’s almost impossible to know what you’re getting in for without a thorough Google search beforehand.

Well, say goodbye to half an hour wasted of looking at reviews for we’ve compiled a handy list of only the highest reviewed horror films on Netflix, based upon their percentage score on Rotten Tomatoes. You’re absolutely welcome.

What’s worse than a murderous clown constantly following you with the sole aim to antagonise your friendship group as much as possible before he eventually kills you? Well, this one can also transfigure into a variety of horrible creatures to ensure that he scares everyone as much as possible dependant on their own deepest fears.

The film follows a group of seven children who are tormented by Pennywise the clown and try to get him to leave them alone. At two hours and 15 minutes in length, there’s little better a way to spend your Sunday afternoon, plus you can rewatch it time and time again without getting bored.

Everyone mainly remembers Hereditary for the shocking scene where the daughter gets her head knocked off by a sign when leaning her head out of the window, but this film actually goes a lot deeper than the overt horror.

When the grandmother of the Graham family dies, the remaining family unearth an inherited family secret that becomes increasingly terrifying. They try to outrun it, but can they do so before the meet their fate? A completely unique horror film with a complex storyline, this is one to put your phone on airplane mode for.

Older films are usually favoured by critics, but can you blame them? In a day where less precedence was put on the horror and special effects that modern horrors favour, intriguing storylines were more important – and Misery is undoubtedly a great example of this.

A famous writer gets into a car accident on his way home after completing his latest novel in the series. A fan of his ends up picking him up and nursing him back to better health at her house, but it seems that her intentions aren’t as wholesome as initially assumed. Kathy Bates is at her best in this 1990s horror/thriller, and it’s another example of Stephen King’s novels being used for award-winning films (he also wrote IT and The Shining).

If there’s anywhere that a deaf person who isn’t very good at communication should live, it’s probably not in the middle of an isolated woodland where there’s no one around to save her if, I don’t know, a masked killer appears in her window and tries to kill her.

A relatively low budget film at one million dollars, it’s not the goriest film you’re ever going to see but that’s made up for with a really healthy dollop of mystery as to who the masked killer really is, with some very compelling deaths sprinkled in for good measure – you’ll be fully routing for the protagonist by the end.

Natalie Portman sheds her swan feathers in favour of a military getup as she plays Lena, a biologist and former soldier who takes part in a mission to find out what happened to her husband inside the mysterious “Area X”.

The group she’s with discover this completely different and sinister world full of mutated landscapes and creatures that is as likely to make them go insane as it is to kill them. With some very recognisable Hollywood faces, this film is unashamedly a big-budget sci-fi watch – vast computer-generated landscapes, amazing visuals and an immersive escape to a different world that could only be found in a film of this calibre.

A Nightmare on Elm Street – 94 per cent

We’ve all seen Edward Scissorhands’ burnt cowboy hat-wearing cousin on too many a Halloween, but there’s a reason this film has become so deeply embedded in our culture.

One of the older horror films on Netflix, Freddy Krueger starts killing a group of friends one by one in their dreams, and the main character soon realises that she must do whatever it takes to stay awake to avoid meeting a similar fate. A really interesting concept and a classic, it’s still just as scary almost forty years later.

Every good thing that’s ever happened in a horror film has started with an Ouija board. Lol, either way, Veronica and her friends want to talk to her father using it during an eclipse. As you can imagine, they end up inviting the wrong kind of spirits and Veronica loses consciousness, DUH.

Whatever will happen next? Well, as some people claimed it is the “scariest movie ever made”, you can be assured that some pretty mad shit goes down. Loosely based on a real story (you love to hear it), there are some great performances plus films with subtitles are always more engaging, right?

Fuck yeah! Teens in a camper! Booze! You got jocks, you got stoners, you got Chris frickin’ Hemsworth!!!

It’s the prime environment for something to go really horribly wrong, and it quickly does as the fit group of teens are trapped inside the rickety old cabin fending themselves off from a load of zombies. There’s plenty to keep you guessing right up until the end, and the whole film ends up taking a completely different direction to the one you’d ever think it would go in. However, this isn’t the most unsettling of horror films on Netflix…

The Invitation – 88 per cent

Okay, so you’re at a dinner party with your ex-wife. They all start acting weird and you can’t really put your finger on why. This film preys perfectly on the fears that everyone has – do you trust your own instincts, or do you accept that you’re probably just overthinking things? Are you being the weird one acting all paranoid, or are you seeing something before it actually happens?

A slow-burner that makes you question when everything is going to kick off, and then all of a sudden when it does OR doesn’t (watch the film, okay?), you’re left completely routing for the plight of the main character. A great watch.

• These are officially the most-watched titles on Netflix ever

• Enola Holmes: This is where you recognise all the cast from Netflix’s new Sherlock film