‘Are you lost baby girl’ is enough reason on its own

The consent line is blurry to… pretty much non-existent. Watching this makes it impossible to recall the time where we thought Fifty Shades was a bit dodge. 365 Days truly knocks it out of the park. And on top of all that, it isn’t even good. The sex scenes are graphic but average, the dialogue is ri-donk-ulous, the acting is a myth and by the time the credits roll you will feel like someone has spun you around with a blindfold on in a darkened room. It’s a very wild ride. Whether it be because of the graphic sex or the terrible, terrible plot, your jaw will be on the floor for the entire movie. At some points I really thought I was hallucinating.

To prove that I wasn’t, let’s walk through it and count down all the reasons it truly is the worst thing Netflix has ever created.

1. You can tell 365 Days is bad from the Netflix description alone

The description is as follows: A fiery executive in a spiritless relationship (good so far) falls victim (oh no) to a dominant mafia boss (o….kay) who imprisons her (oh NO) and gives her one year to fall in love with him (Jesus Christ).

Straight up red flags. So many red flags I can’t see. If I was a bull I’d be very over stimulated right now.

Also, this is clearly just Hades and Persephone. And yet, we all watched it anyway. It’s number one in the UK today. Lockdown really has addled our brains.

2. It opens with a castle and there’s some talk of child trafficking straight off the bat

No fucking about here, diving straight in with the child trafficking. This also ends up being completely irrelevant to the rest of the plot. Massimo’s dad drops the totally progressive line: “Beautiful women are heaven for the eyes, hell for the soul and purgatory for the wallet.” Nice. Straight away you know this film ain’t gonna be a feminist masterpiece.

Then BOOM just when you think it’s all business and family chat, Massimo’s dad gets shot. Let me tell you, that gunshot genuinely scared the shit out of me, I thought it was the beginning of a Mills and Boon novel not a fucking Jason Bourne film. 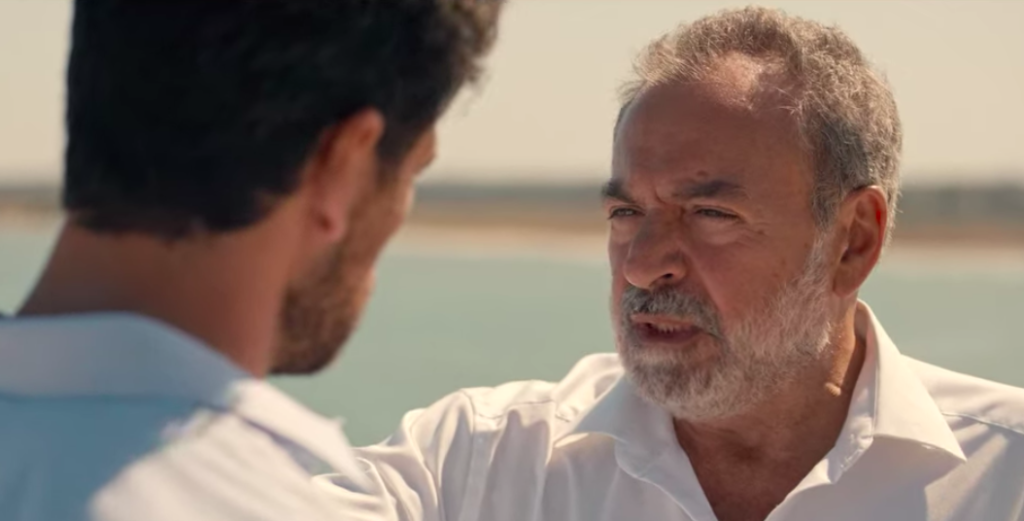 3. The introductory song is some Charlie Puth ridiculousness

Look it’s probably not actually by Charlie Puth but you just know what I mean here. There’s more panning castle shots. There’s no sex yet. Where’s the sex? Five mins in and no sex. I want my money back. Cancel my Netflix subscription.

(P.S. First mention of sex is seven mins in).

You do gotta respect Laura’s business acumen though. Also no matter how much you wanna pronounce it as Laura, your head will always say Low-ra thanks to Massimo.

5. We meet Laura’s boyfriend who is a dickhead who keeps saying she has a ‘weak heart’

At first you may hear this and think “That’s uncessarily poetic and mean. Oh wait, does she have a heart condition or is he just being a dick” the answer is both. He seals the deal with saying “Besides you probably haven’t packed for us yet” about their holiday tomorrow.

6. Massimo is just Italian Adam Collard and you can’t prove me wrong

Half expected him to say “Rosie” in a Geordie accent at a number of points throughout the film. Shame he didn’t. Might have taken us a bit out of the moment though, to be fair.

7. The first 365 Days sex scene shows you exactly what you should expect from the other sex scenes

8. Massimo wears a black suit with a black shirt throughout basically the whole film

I don’t trust any guy that wears a black suit with a black shirt but also Laura’s original boyfriend wore nothing but cargo shorts and vests so I guess it’s the lesser of two evils.

THIS LINE. THIS GOD FOR SAKEN LINE. Also, the first time he says it to her they haven’t even MET before and she seems quite unbothered that he seemingly just emerged out of the darkness then disappeared instantly. Is he capable of teleportation? I hope he jumped into the bushes.

10. He literally kidnaps her

First off, I can’t believe she just got kidnapped in that nasty ass Aztec kimono dress with a sugar skull on the back. That’s just bad luck. And what are those pearl wedges. Yeesh.

I hate this God damn kimono

11. And sedates her. And imprisons her. And sexually assaults her

Dude I know this film is supposed to be a bit of fun and it’s wholly unrealistic but this is BAD. Like inexcusable bad. They throw in some lines to make it seem less rapey like “I’m not an object” and my personal favourite “I’m not a sack of potatoes you can just move around”. He then acts like he’s giving her a CHOICE to fall in love with him in 365 Days… while also… keeping her captive… literally a hostage. In the scene where she wakes up he also says “I won’t do anything without your permission” to her as he throws her down and grabs her tit. Then says “don’t provoke me, I’m not used to being gentle.” It’s fucked up. Let’s leave it there.

12. He also has another prisoner? Just like, for fun?

And he’s tied to a big stone wheel. He’s a child sex trafficker so I guess that’s fair, but it’s also very clearly a ploy to trick the viewer into thinking – despite kidnapping and sexually assaulting a woman – he is a good man because he wants to torture child traffickers. Me thinks not.

13. Massimo literally drags Laura around by her wrist

Oh but he’s taking her shopping, so I guess that’s fine then. No biggie! At least she gets free clothes!

14. At one point he says ‘If you felt like running you should have worn different shoes’

Truly all I can say is yikes.

15. The whole movie is like watching a terribly written fanfic that was given a Netflix level budget

16. WHEN SHE FALLS OFF THE BOAT

At this point I mentally and emotionally gave up.

17. He saves her life and suddenly isn’t a bad man anymore

All it takes was a dive into the ocean to save her and suddenly Laura can forget all of that kidnapping and sedating nonsense. That’s history now! Time to kiss. Also, may I add that when she wakes up after falling off the boat, Massimo says “I’m so glad you’re alive but at the same time I want to kill you.” Not very nice. But apparently it works on Laura because what comes next is…

19. All sexiness is immediately ruined by the hideous Paris hat

20. The moment where two very obviously gay stylists are introduced but don’t speak

The two stylists who have very clearly been directed to “act camp” appear. They are not introduced by names nor do they speak. What they do do is fondle Laura for a bit, pick out a dress then she can go to the ball.

21. Both characters just HAPPEN to be trained ballroom dancers

22. When Low-ra says this line

“Imagine a strong alpha male, he is your caretaker and defender, when you are with him he makes you feel like a little girl.” This is enough for you to know it is the worst film ever made by Netflix. Nay, by anyone.

23. There is a totally unnecessary makeover scene

Everyone knows makeover scenes are only good when there’s a genuine transformation! Princess Diaries, St Trinian’s. But Laura was already FINE. Her best mate literally says to the stylist “look at her” implying she’s in desperate need of a makeover. Honey those eyelash extensions aren’t even a week old. I’m not buying it.

24. The real romance is between her and her best friend

There’s some heavy lesbian tension here that they’re not exploring which is upsetting. Also their relationship is unproblematic, loving and there’s no kidnapping involved, which is a rare positive when it comes to this movie! Let’s hope the sequel is about these two gals falling in love instead, please. 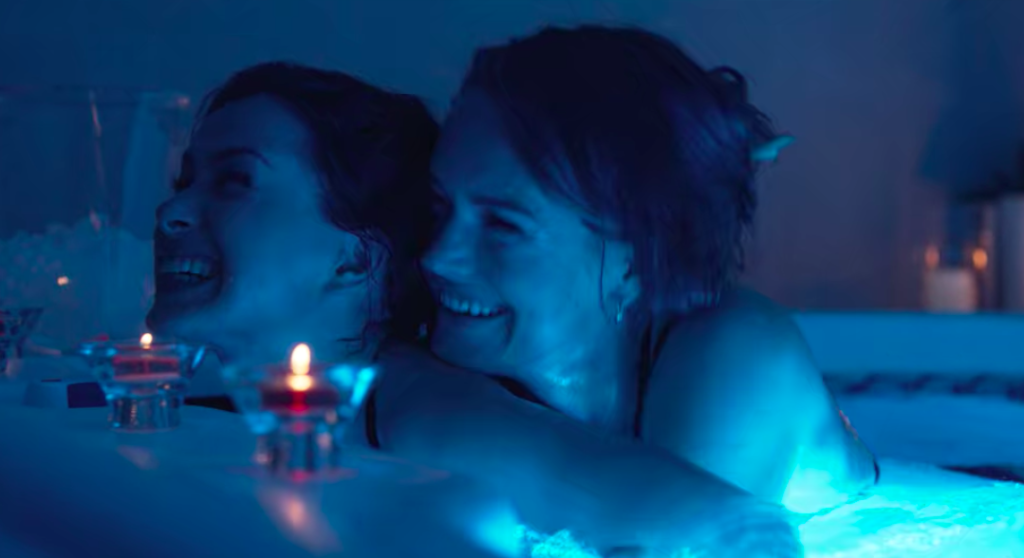 25. Low-ra randomly changes to blonde hair like 20 mins before the end of 365 Days

She literally looks like another person with this new hair (cough cough very obvious wig cough), and there is no way her dickwad ex-boyfriend could recognise her with that new ‘do. He doesn’t recognise anything but vests and cargo shorts. Yes I know I sound insane okay this movie has driven me insane.

26. We went from them having sex for the first time to Laura trying on wedding dresses in 30 minutes

Whoever wrote this fan fiction needs to learn about pacing. Things move so quickly towards the end you feel like you’re on drugs driving on the motorway and also have whiplash. It’s not a good feeling.

Do you see what I mean about things moving fast. We find out she’s pregnant and planning to tell Massimo after dinner, but dies on her way back from the wedding dress fitting. You cannot write this. Someone took a bad romcom tropes generator and thought “fuck it” and tried to cram ALL the tropes into one movie. And out came 365 Days. I’m exhausted. You’re exhausted. I need to watch a silent film or something disgustingly intellectual to reverse what that just did to my brain. I may never be the same. If anyone’s interested in setting up a Life After Watching 365 Days Support Group please hit me up.

• 365 Days is based on the first of three books, and there’s loads more to come

• Finished 365 Days? Try these 10 equally as thirsty films on Netflix next