About a month ago I caught my dad making a rainbow out of several sheets of card, it was a proper arts and crafts project. He explained to me he was going to put it in the window. Woah back up. Was my dad, with zero prompting, about to declare himself an ally to the whole road just in time for Pride month? Nope. The rainbow, he told me, was to reassure passing kids in these shitty times when all anyone is talking about is a virus they don’t understand. And fair enough, kids are a bit freaked out right now, but does it make me a bad person that for a second it made me angry? Resentful even? Day by day more and more rainbows began to appear down the road, then on the news, then on busses. Soon the NHS had adopted it as an official motif. What was once a symbol of Pride has now been reappropriated to be synonymous with “thank the NHS”, “clap for carers” and kids who aren’t allowed to play outside, and for a lot of queer people (myself included), it feels unfair.

Look I’m not out here saying the kids who drew rainbows and mailed them to nurses are horrible people, because they’re kids and it’s a sweet gesture you can’t knock. And I’m certainly not trying to tell you LGBT+ people own the very concept of rainbows. It’s not even really the NHS at fault here – a lot of this was out of their hands – but the way brands and the Tories have taken the rainbow and ran with it is uncomfortable to watch. Looking at summer streets full of boomers dangling actual Pride flags with NHS written on them, it’s hard not to to think: yeah this is a form of erasure. There’s a nuance here that most people are missing.

As nice as it is to see the pride flag everywhere, it's deeply offensive that homophobic people and Tories are flying the pride flag and calling it the NHS flag. People have died for that flag and still due to fight for what it stands for. And yes, people die for the NHS…

I’m not the only one who thinks this either. A petition for people to change it now has nearly 1,000 signatures, and it’s only been up for a day. I set up a group chat with LGBT+ students to ask them what they thought, and it was like some of them had just come up for air. They too feel uneasy, but they know if they say so they’ll be told to pipe down. After all, coming for the NHS in this climate is like threatening to paint over a war memorial in October, you just don’t do it.

“I passed through a rural town in Northern Ireland the other day with an actual Pride flag on a lamppost with ‘NHS’ in white writing on it”, James writes in the chat. “Previously I’d have been astounded at a Pride flag flying on a lamppost here, but now I think it’s clear its meaning is getting lost. I think many LGBT+ people would, upon seeing a Pride flag, normally feel welcome and safe, but that doesn’t necessarily hold true anymore.”

The safety point is interesting, because NHS workers wearing rainbow badges actually communicate something important that now risks getting lost in translation. 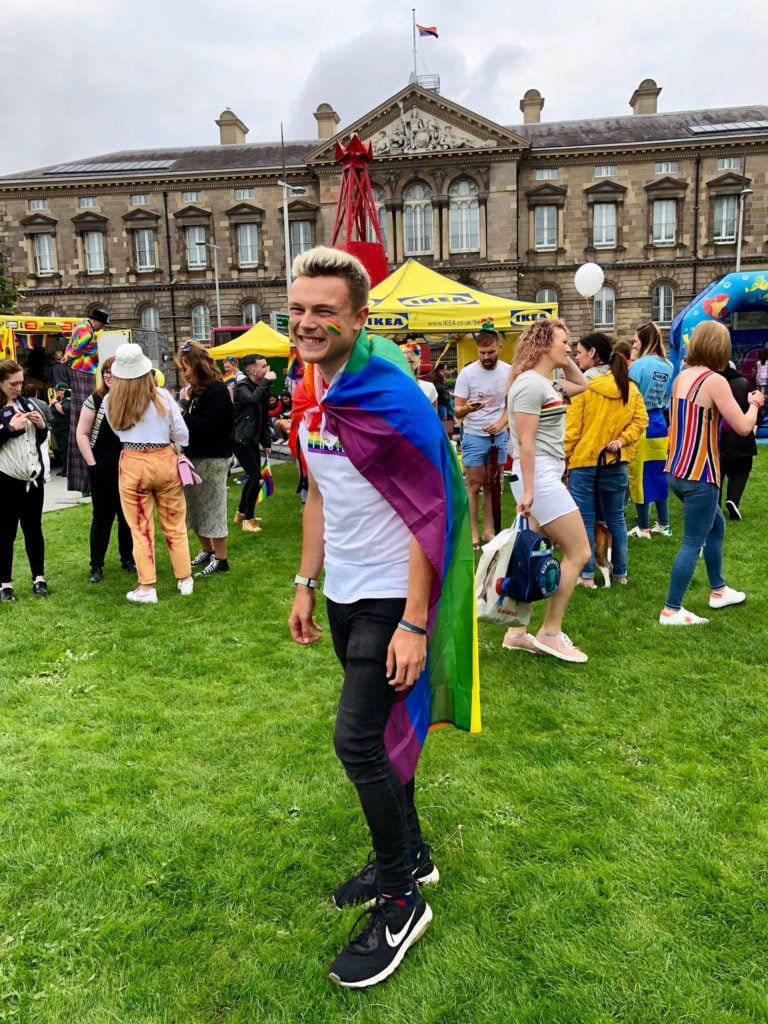 “One reason I get angry about it is that the whole rainbow NHS LGBT+ badge thing they started doing a couple years ago was to let queer patients know they’re okay to be honest and open about their health problems as a queer person,” 21-year-old Charlie writes. “Now if I see a doctor or nurse with a rainbow badge I won’t know if that’s for supporting me as a queer patient or just an empty middle class gesture for supporting the NHS during COVID.”

A lot of (mainly straight) people will argue ‘complaining,’ as Christian.org puts it, about a flag is tone-deaf, given the very real death coronavirus causes every day. It’s as though the Pride flag wasn’t already a rallying symbol for LGBT+ people throughout the AIDS crisis, or those attacked in the streets for carrying the flag in public. 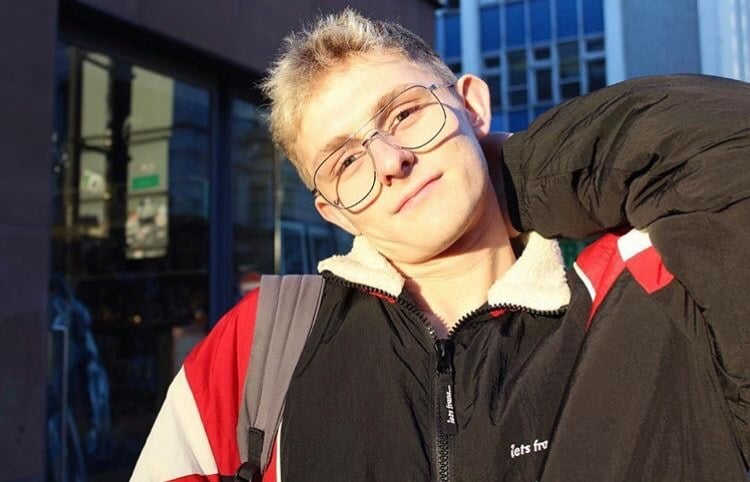 “Gay people have been dying this whole time, not just through AIDS (which was an epidemic in itself) but we’ve literally been killed because of who we are,” 22-year-old Maddy tells the chat. “Coronavirus doesn’t discriminate but nightclubs have been shot up because they’re gay hotspots, women are assaulted for kissing their partners on public transport, men are attacked for acting a certain way which might even elude to not being straight. Queer people died too, we have that flag for a reason. Now it’s kinda like ‘well you have to be okay with it because now everyone is dying’.”

And the appropriation of Pride isn’t just symbolic, after all with many companies cynically repackaging Pride-themed products to sell them as NHS variants, money which would have presumably gone to LGBT+ charities will instead go to the Health Service. It’s not like this is a wholly terrible thing and LGBT+ people will of course benefit from it in some way, but those charities (and many of the people they help) need that money to survive and, unlike the NHS, they won’t benefit from billions in government funding.

“The repurposing is what is really pissing me off. Like, it’s possible to celebrate the NHS and LGBT+ people simultaneously, one is not more important than the other,” says Hannah. “People need to understand the difference. Repurposing is just scraping the bottom of the barrel.”

With most Pride events now shelved, you can’t really blame brands for being pragmatic about the flag situation, especially since the commercialisation of Pride leaves a sour taste in a lot of people’s mouths. 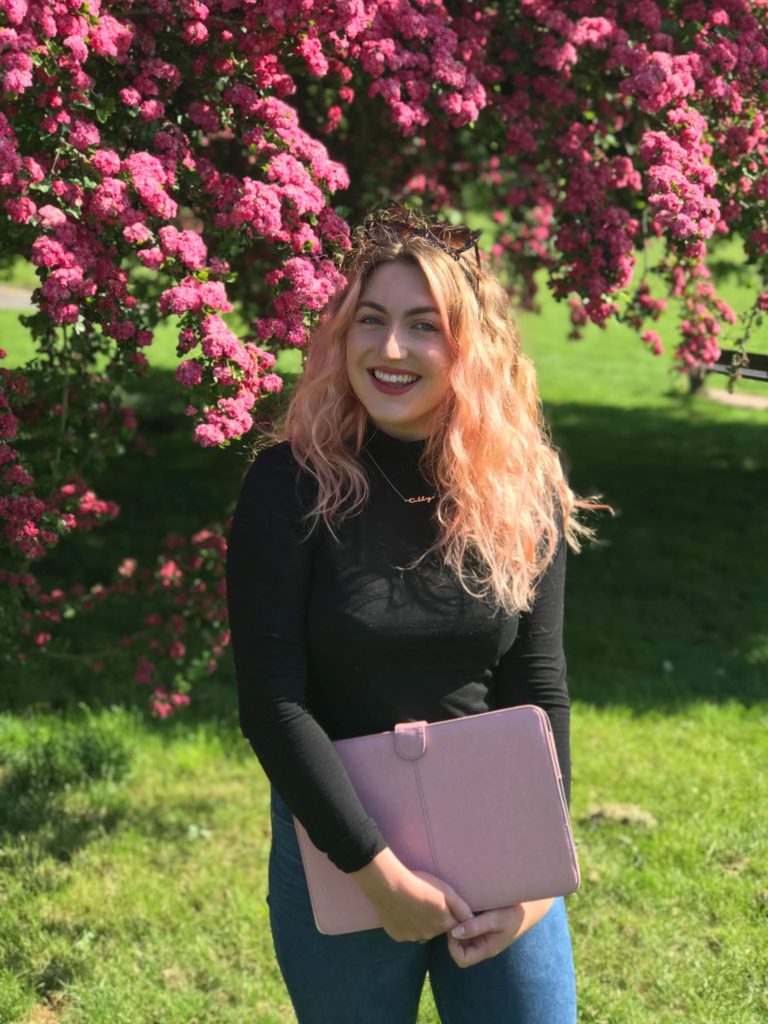 “One of my hobbies is waiting until midnight on June 30th, then refreshing the social medias of big companies and seeing them change their logo back to the original at 00:01,” writes Tilly.

It’s ironic at best, and tragic at worst, seeing 40-year-olds getting so into the rainbow stuff when they would never hang the same flag out their windows for Pride. For Kyle, who says his parents have struggled to accept his sexuality, the conflicting symbolism has actually meant his parents don’t fly the flag.

“My parents are so rock hard for this Thursday night clapping malarkey and only through their queer sons do they know what the flag actually is”, he says. “Other than that they would have rainbow flags everywhere and yet they don’t. I can see right through them. They don’t like everybody knowing about ‘the gay sons’, and so supporting the NHS with ‘that’ flag wouldn’t look too good with their church pals.”

This evening people will line the streets to clap for the NHS, possibly for the last time. Perhaps the rainbow flags will go too. In a month’s time, when the dates roll around for those cancelled Pride events, will those same people who bought flags and made rainbows out of cardboard to cheer up 4-year-olds find the same energy to hang them from their windows again?

• Introducing: The swanky cars your uni provides to its Vice Chancellor