Surprise, surprise Matty Healy has messed up again. Earlier today he tweeted a link to a 1975 music video for the song “Love It If We Made It” with the caption “If you truly believe that ‘all lives matter’ you need to stop facilitating the end of black ones”.

Though the message was well intended Matty got a lot of hate from people on Twitter who said he was “profiting” and “promoting” his music off of the death of George Floyd, who tragically lost his life after being knelt on the neck by a white police officer this Monday.

His death has caused a number of protests against police brutality in the US this week and several petitions have been set up calling for justice for George Floyd’s death.

matty healy stop promoting your own songs in a response to the black lives matter movement.
now's not the time mate.

everyone: funny how matty healy is staying so silent despite having built his bands imagine around being politically charged

matty healy: *uses the situation to promote his own song*

everyone: okay maybe he was right to stay silent

Matty quickly apologised for the insensitive tweet and said the song summed up his feelings towards the situation better than he could. 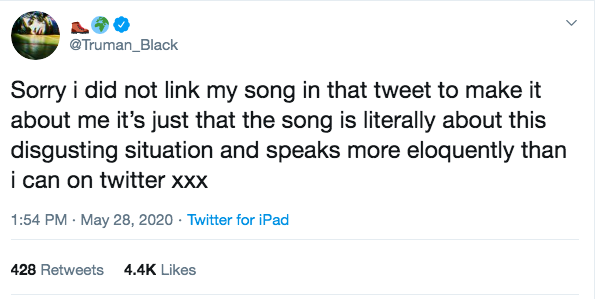 After apologising Matty deleted the tweet. However he then rewrote the original tweet “If you truly believe that ‘all lives matter’ you need to stop facilitating the end of black ones” without the video and then a few minutes later tweeted out the video on its own.

•QUIZ: Who said the phrase, Matty Healy from The 1975 or Jesus Christ himself?