In a tweet, Emily Dawes stated she wanted the removal of The Rothenstein Mural which represents all students who served and sacrificed their lives during the War, never getting to finish their degrees.

She tweeted: "Mark my words – we're taking down the mural of white men in the uni Senate room, even if I have to paint over it myself". 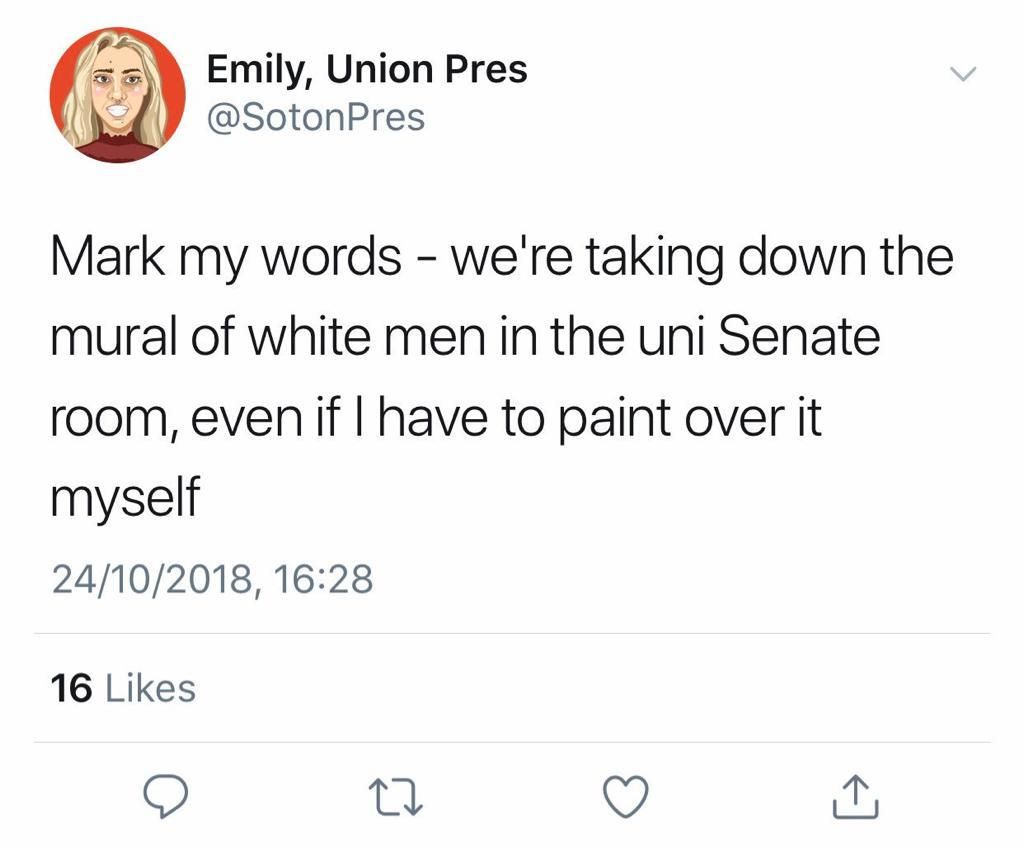 After nearly 1,000 replies, the Students' Union tweeted an apology this morning, followed by an apology from Emily.

Many have found her tweet offensive and disrespectful, with some saying they are "dumbfounded" and "surprised there hasn't been an apology".

I like many others are totally dumbfounded by her comments. How long will it take before someone has a word and tells her to wind her neck in?!

You’re absolutely right it is a memorial to members of the University who served in the Great War. Surprised there has been no apology or no response from @Union_Soton @WessexScene @SotonTab

Southampton Students' Union tweeted an apology this morning, saying: "We apologise for the recent statement from our President regarding the Rothenstein Mural and any upset this may have caused. This is a personal view and not that of the Union.

"We do not believe the statement was said to cause upset or disrespect to anyone and does not follow our mission or values. We have reached out to out President to ask for a statement to be released."

Here's our statement regarding yesterday's tweet from our Union President. pic.twitter.com/xqKiK6GPNI

“We are very proud to display the Mural, painted in 1916, which serves as a memorial to all members of British universities who served in the Great War (World War I).”

This is particularly poignant in view of the forthcoming centenary of the Armistice which ended the conflict in 1918.

Emily recently tweeted an apology saying: "Firstly, and most importantly, I would like to apologise for the offence and upset I have caused with what I said. I never meant the disrespect to anyone past, present and future. I had no intention of the tweet being taken literally, and upon reflection have realised how inappropriate it was.

"My intention was to promote strong, female leadership and not the eradication and disrespect of history. I do no believe that to make progress in the future, we should look to erase the past.

"Once again, I would like to apologise for the offence and upset I have caused."

Since apologising, two petitions have been made calling for Emily to resign from her position. One petition currently has over 50 signs out of 100 and the other has over 700 out of 1000.

The Soton Tab will continue to update with the story as it develops.

• Is the SU President the most pointless student on campus?