Mick has said there will be more Gavin and Stacey episodes

Larry Lamb said in an interview that he thinks there will be more Gavin and Stacey episodes to come. Larry aka Mick, also said he wants to make a Gavin and Stacey movie. I will be the first person at the cinema if that is true.

In an interview with OK! Magazine, Larry was discussing the cliffhanger in Gavin and Stacey’s recent Christmas episode ended on. He thought it would be unfair to leave it on that, and I whole heartedly agree.

He said: “I think it would be pretty cruel to leave us on that cliffhanger, after the response it got at Christmas, you can more or less be certain that, sooner or later, there will be more.

“I’m sure the BBC can persuade Ruth and James to write more, so it’s a question of when, not if.” 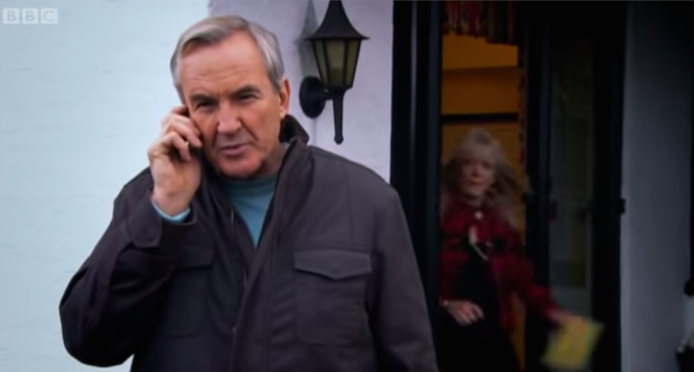 Mick ringing up James Corden to get him on it. via BBC

Larry said because of everyone’s scheduling and time commitments it’s unlikely it would be a whole new series, but at some point in the future he does see another special happening.

He said: “The problem is, logistically, it’s a bloody nightmare as so many people involved with it have very active careers. It’s virtually impossible for there to be a whole series, but I imagine there will be another special.

“I’ve always thought a logical thing to do would be a Gavin & Stacey movie, but that’s just my idea.”

Until that day happens, the next Gavin and Stacey fix you can get will be at the charity quiz hosted by Pam tonight.

•Oh my Christ! Pam is hosting a Gavin and Stacey quiz on Thursday!

•Oh! Take this tidy quiz and we’ll tell you which Gavin and Stacey character you are

•Oh my Christ! You won’t score above 13/15 in this Gavin and Stacey quiz