Spoilers for The Stranger ahead. Don’t read on if you haven’t finished it yet, you moron.

Let’s get one thing clear: I enjoyed The Stranger. I watched all eight episodes of The Stranger in 24 hours because Netflix’s automatic next-episode-cue thing is far too seductive to refuse. Does that make me a dirty little urchin with no impulse control? Maybe. Does it mean The Stranger is any good? Well, no.

The more I sunk into The Stranger’s wild ride of twists and turns, the stupider things got: How is Adam able to get away with seemingly never going to work? Why does Adam let Tripp drive him into the woods before the big confessional moment? What was the point of the fucking alpaca head???

This article might make you angry at having poured away eight hours of your life into what is essentially a run-of-the-mill thriller, but you have to face The Stranger’s stupidity at some point so you can move on – this is the catharsis you need. Walk with me, child, through the moments of The Stranger that prove that it is really really dumb:

FIRSTLY, ADAM IS LIKE 48 IN REAL LIFE AND I HAVE TO KNOW HOW THIS IS POSSIBLE

I Googled this roughly 20 seconds after his first on-screen appearance and this man has genuinely not aged since he was in Spooks. How is that fair?

You know when you see something in a series and you are hit with the realisation that this is what boomers think kids do in their spare time? Because seriously a silent disco? These kids are 17, right? They should be sharing two Strongbow tinnies and playing music from a shitty speaker. No one has time to set up a silent disco and a bonfire get a life.

You’re telling me these teenagers know how to code and start fires? Come off it.

So striking. So pointless

Between the alpaca head, the kid who gets injured, the drug spiking, and Mike’s continual wigging out it’s kinda mad that none of what happened at the field rave ends up impacting the main storyline concerning The Stranger. It felt like an excuse to include some young people and flashy set pieces early on in the story, imo.

KNOWING HOW THE SERIES ENDS, CORINNE IS NEEDLESSLY CRYPTIC ABOUT THE FAKE PREGNANCY

You would think Corrine would just come clean about the whole fiasco with the football club then and there (or, you know, tell her husband about it), but no, she fobs him off and gets murdered. Not such a smart move, was it, Corinne?

SERIOUS QUESTION: AM I ALLOWED TO FIND HANDSOME THOMAS HANDSOME? 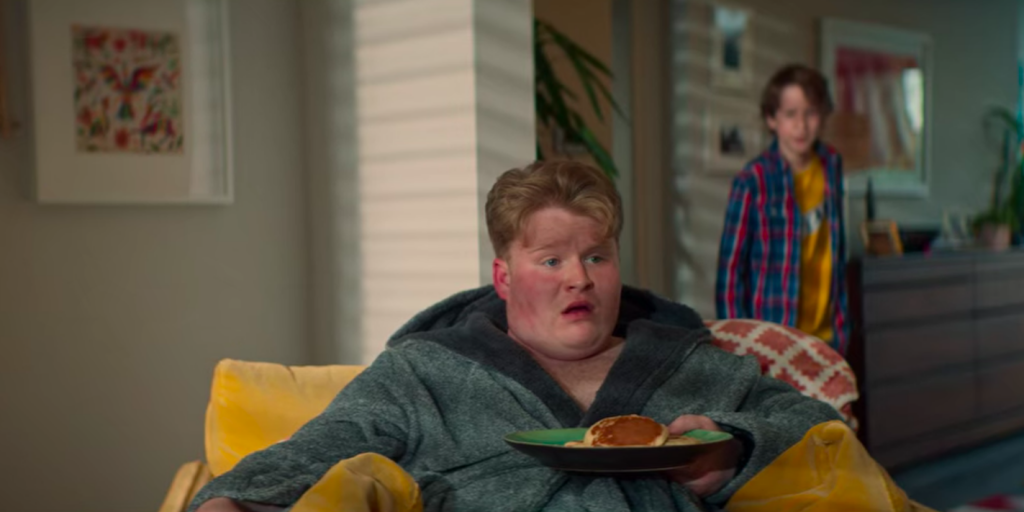 This would NOT pass a vibe check imo

Real talk Mike is straight up horrible to his mates and if I were handsome Thomas I wouldn’t stand for it. Also he killed an alpaca with a shovel which is seriously bad vibes.

OH, AND WHAT IN FUCK WERE THEY ALL THINKING WHEN THEY DECIDED BURYING THE ALPACA’S HEAD IN A SATANIC RITUAL IN THE MIDDLE OF THE WOODS WAS A GOOD IDEA? 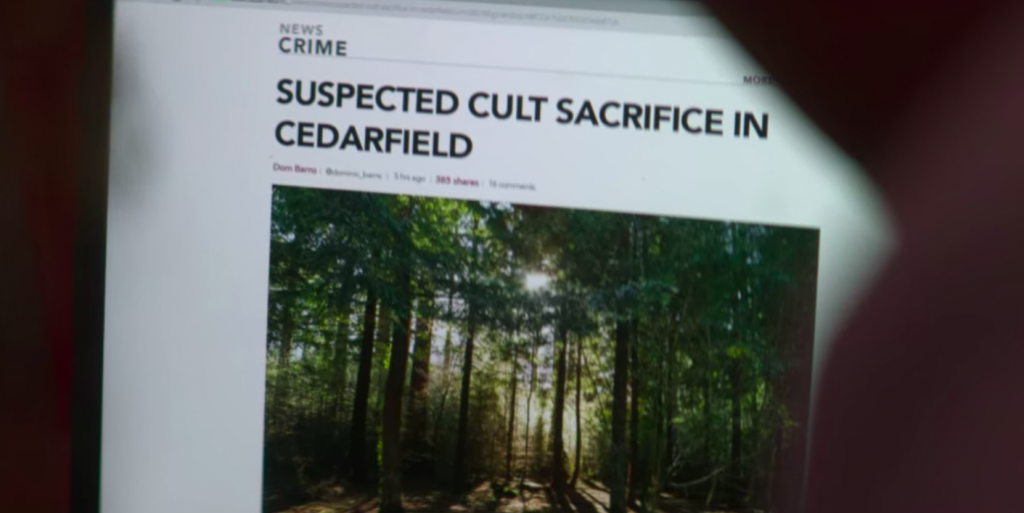 You could have, I don’t know, left it in the many acres of field and woodland?  Also everyone in this show gets their news from a website apparently called NewsCrime and you just wouldn’t call a website that.

ARE ADAM’S KIDS HIS? WE NEVER FIND THIS OUT

Stop flirting with her your wife is in a shallow grave

Also when Adam meets her to ask about his murdered wife he’s kissing her and seductively touching her hand in slow motion. If I were Corinne I would be  turning in my shallow grave at the HYPOCRISY of it all.

Is that from Primark pal?

WHY DOES ADAM ALLOW CORRINE TO DELAY THEIR MEETING UNTIL AFTER THE AWARDS THING – AND IF THEY WERE GOING TOGETHER WHY DIDN’T THEY GO TOGETHER??? 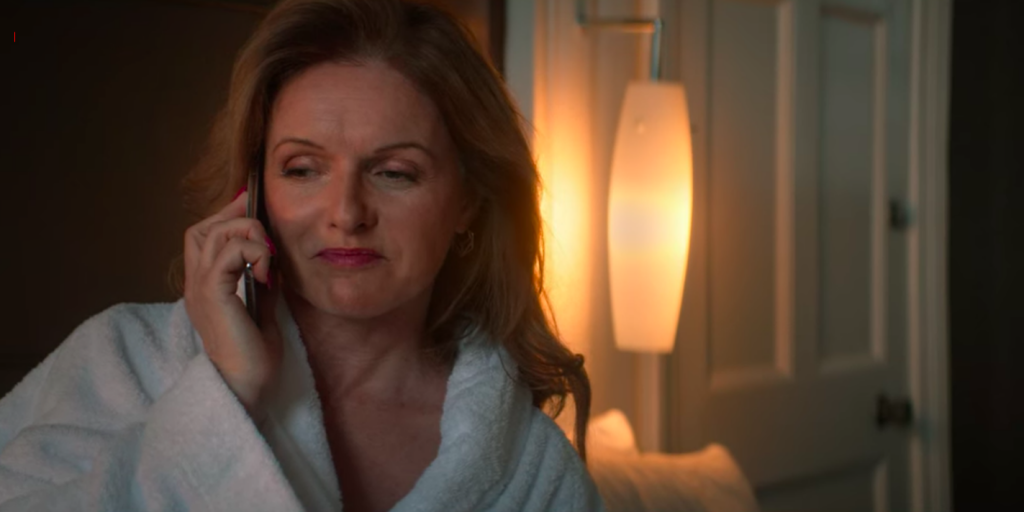 Aside from being quite beta behaviour you’d think a major revelation like this would spark an urgent discussion. Instead Corinne basically tells Adam to just… not bring it up? Can you imagine if these people had just confronted their problems head on – then no one would have died.

I wonder how much she got paid for what was essentially a series of flashbacks of her laughing at the camera?

She even speaks at the funeral!!!!! Seriously who is running the show here?

SPEAKING OF THE CASE, WES IS A GENUINELY SHIT DETECTIVE AND I’M ASTOUNDED JO DIDN’T JUST PUNCH HIM IN HIS STUPID FACE

God I just hate you

There’s a moment where Wes realises Katz is the murderer, and then announces it to Jo over loudspeaker. You would think, given Jo and Katz are colleagues and might reasonably be in the same room together, Wes would have checked to see Jo was alone or called her back to the office. But no. Katz beats Jo up. Nice one Wes.

ALSO IS THIS AN APPROPRIATE TIME TO MENTION THE THEME SONG IS REALLY BAD?

I mean just listen to it.

Is this dialogue humanising enough?

Seriously what impact does he have? Like I might have understood if she had started another relationship or something but her husband doesn’t really serve a purpose at all. I couldn’t name his character at gunpoint.

I wanted to see him sweat this is BULLSHIT

I mean they do show Adam running about in his activewear so he can probably jog a fair distance without getting too tired but come on. These guys have surely travelled miles by this point and they’re not even panting.

Didn’t realise baseball caps gave her the power of teleportation

She’s right there and somehow he doesn’t notice her vanish? Maybe she fell into a plot hole tehehe.

FOR THAT MATTER, WHY DOES THE STRANGER BLACKMAIL SOME PEOPLE BUT NOT OTHERS?

You have double standards, hun

It would seem she only doesn’t blackmail Adam and his dad because she wants to unite them as a family, but she doesn’t blackmail the woman at the bowling alley either so what is her metric for deciding who has to pay up?

AND ANOTHER THING, IS NO ONE GOING TO HOLD HER ACCOUNTABLE FOR JENNIFER SAUNDERS GETTING SHOT IN THE HEAD?

It is quite peak that Jennifer Saunders can’t really escape her fate. Worse still that it’s really the stranger’s fault for putting her in the mess to begin with.

ALTHOUGH MAYBE IT’S THE DAUGHTER’S FAULT. AFTER ALL, HOW FUCKING STUPID DO YOU HAVE TO BE TO CONTACT YOUR POWERFUL WEALTHY SUGAR DADDIES ABOUT POTENTIAL BLACKMAIL

‘Hi, heard you’re getting blackmailed. I told the people who’d probably kill one of us over this so hope that helps!!!’

This was a bit of an own goal from Kimberly, let’s be real. I mean really, if I were being blackmailed over a sugar daddy app I’d make deleting it a big priority, and not contacting the men to kindly let them know.

He like randomly batters Adam but I don’t think his connection to Corinne is ever brought up again.

If a brick fell on his head he could sue

That is a big ol’ hazard, my dudes.

THE EXACT POINT THE STUPID BARRIER BROKE WAS WHEN THE 20-YEAR-OLD BODYBAG FELL OUT OF THE WALL DURING THE DEMOLITION, IN CASE YOU WERE WONDERING

What was the point of this, again?

I mean there is only so airtight you can make a bag before it starts to pong – even through the walls. Also by that point it would have rotted a fair amount. I’m amazed it stayed in one piece when the wall came down.

Also she fancies Mike which is just the wrong take on so many levels.

I’m not saying the whole mother-poisoning-their-child-for-fucked-up-reasons dynamic isn’t a real life issue we should be talking about, but in the grand scheme of things it never ends up mattering any more than the field rave.

AND IF CORINNE HAD A SUSPICION SOMETHING WAS UP SHE SHOULD HAVE TOLD CHILD PROTECTION SERVICES, YOU KNOW, LIKE A TEACHER IS TRAINED TO

If I were Ofsted, I would have given her a big fat zero.

DOES ADAM EVER GO TO FUCKING WORK?

Okay fair they do point this out, but even lawyers need to get that bread.

I mean his mum did die but seriously can you just shut up about your homework for like two minutes? Jesus Christ.

LET’S GET ONE THING STRAIGHT, AMATEUR FOOTBALL CLUBS ARE GENERALLY IN CONSTANT DEBT SO THE IDEA OF TRIPP BEING ABLE TO FINANCE HIS ENTIRE LIFE EMBEZZLING ITS FUNDS IS JUST IDIOTIC

THOUSANDS of pounds he swindled, apparently

Also in a story with beheaded alpacas, kids getting high, fake pregnancies, affairs, and MURDER, the last minute reveal of the football club’s finances being a big deal was a bit of a fart in a hurricane.

You could have got him to confess you had a gun

It’s as if Adam learned nothing from his back and forth with Corinne in the first episode.

If I were in a character in a thriller and not sat here evaluating my life choices while I write this I would make damn sure voice notes were on  my shortcuts because you really never know when someone will spontaneously confess their wrongdoings. It’s not even spontaneous with Tripp – it’s heavily telegraphed. Adam deserved to go to prison for the crime of being a foolish fool.

HOW AND WHY WOULD KATZ HAVE POSSIBLY KILLED BOTH TRIPP AND CORINNE???

Character motivation? I don’t know her

This is all very hurriedly explained and I still don’t think it would have stood up in court. I don’t believe Katz ever actually met Corinne or Tripp, let alone had any reason to kill them.

Apparently all cops can be hitmen

I mean think about it, there are a lot of policemen and women in the world and apparently they’d all be excellent murderers?

AND I DID NOT NEED TO SEE CORINNE’S COLD, DEAD, DIRTY BODY AS MUCH AS I DID

I repeat: who is running the show here? They should be SACKED.