If you’ve finished Netflix’s Cheer and now have a big Navarro cheer hole in your heart, don’t worry, because these hilarious Netflix Cheer memes will temporarily fill that void.

Everyone has collectively fallen in love with Jerry Harris and rest of the Netflix Cheer cast, wants Monica to be their second mum, and cried when La’Darius’ brother shed a tear during the finals. And now you can experience it all again, but in meme format!

These are the best Netflix Cheer memes:

1. Probably the most beautiful moment on television

Me watching La’Darius’ brother cry while watching him win at Daytona #CheerNetflix pic.twitter.com/lUtz6DUj3n

I want to binge the rest of #CheerNetflix but i know Monica would want me to go to bed at a reasonable hour and we're not letting her down in this house.

When Jerry said he never thought that he would make it to Daytona and Ladarius just softly goes “I did…” #CheerNetflix pic.twitter.com/rnnoY3KXjv

4. That fall is my sleep paralysis

Can we talk about how Alex was the real MVP of Navarro.. dude had 30 minutes to learn his part of the routine and pulled it off #CheerNetflix

when gabi said she wanted to move home with her parents #CHEER #CheerNetflix pic.twitter.com/tTwmIg6uaJ

Me, starting “Cheer” on Netflix: okay, this looks like it could be some mindless fun

Me, after three episodes: Let’s GO, Morgan, you are STRONG YOU CAN MAKE MAT, girl. JERRY, you beautiful human, KEEP UP THE POSITIVITY!!!#CheerNetflix

Keke every time a cheerleader falls and gets hurt😅😂 #CheerNetflix pic.twitter.com/NzoDdORM33

11. That is real friendship

But let’s talk about La’Darius and Jerry’s pure relationship they have where Jerry teaches La’Darius to be more empathetic and La’Darius teaches Jerry to be more confident #CheerNetflix pic.twitter.com/3ehq98Gdd2

12. I will be speaking to the manager

Me before watching Cheer on Netflix: Meh sure I’ll give it a shot

Me after: Jerry better be on mat or I’m driving down to fucking Texas

Watching #CheerNetflix and I definitely need a Jerry to Matt Talk me through my life pic.twitter.com/m9KN4MYkNq

Me watching Navarro win nationals vs me 5 minutes later finding out Lexi fucked up her spot on the team and won’t be able to compete again #CheerNetflix pic.twitter.com/672yOSZBs7

First 15 mins of this #CheerNetflix : “Eh this isn’t for me”
Me 5 hours into binge: “IF JERRY DOESNT GET ON THE FUCKING SQUAD I AM BURNING EVERYTHING DOWN” pic.twitter.com/8Y3BFTI6a9

16. THAT BOY DESERVES THE WORLD

“PUT JERRY ON THE MAT OR WE RIOT!” pic.twitter.com/XCaP8bGjpX

Also me: MORGAN HAS COME SUCH A LONG WAY AND JERRY DESERVES TO BE ON MAT AND HOW THE HELL COULD YALL DROP SHERBS AND GABI NEEDS BETTER PARENTS AND IM SO PROUD OF YOU LEXI pic.twitter.com/hkpA1BFtbs

lexi getting quizzed on which navarro alumni had the flu at daytona nationals 2009 #CheerNetflix pic.twitter.com/70QGlzBmrg

19. Probably the truest of the Netflix Cheer memes

21. Seriously someone DM me what that means

Now that I’ve spent 6 hours of my life watching the entire cheer documentary on Netflix , i feel like I have the right to know what #fiofmu means 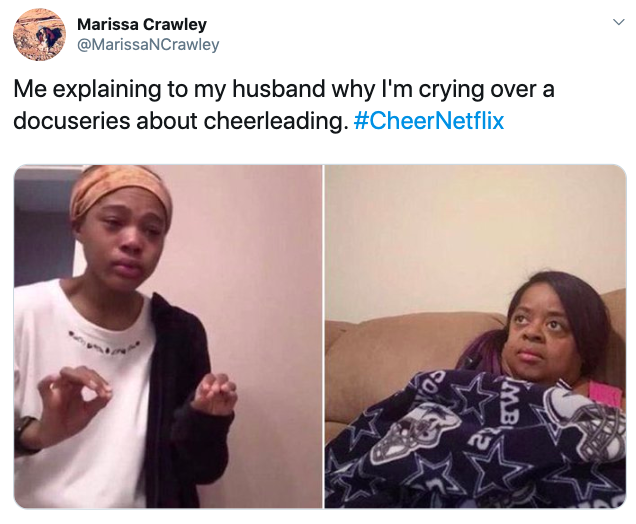 Me whenever Jerry appears. I just love him so much. The purest human being #CheerNetflix pic.twitter.com/gc3EhzAzhu

me, a girl who knows absolutely zero about cheerleading: ooh this cheer documentary looks kinda interesting i guess

me, 2 episodes in: morgan your back handsprings need to be faster or you won’t make mat!! and point your TOES #CheerNetflix #CHEER

25. Siri, how do I become a cheerleader

I’ve finished #CheerNetflix and I have come to four conclusions:

1) cheerleading is wild
2) I would take a bullet for Morgan
3) Jerry is the greatest human alive
4) I want Monica to be proud of me pic.twitter.com/Q7feZ9N3Qx

Yes hello Netflix? I’d like another 6 episode true crime doc on why the hell Sherbs hit the floor. I want alibis. That was fucked up.

She definitely went back, and to the left… #CHEER #NetflixCheer #CheerNetflix #jfk

I never thought I would binge watch a show about a sport I know nothing about but here we are. I can. I will. I must. #CheerNetflix

Jerry idk your @ name on here. But everyone needs a Jerry in their life. People filled with laughter and energy of his sort are sent from a special place to brighten up every humans day when around them. #CheerNetflix put Jerry on #TheEllenShow #cheer

When you just fell off the Pyramid and Monica tells you to get up and run it again. #CheerNetflix #Cheerhttps://t.co/FQgsHSOmTW

Me: What in the hot hell is a Navarro?#CheerNetflix Episode 6 – Daytona

the citizens of corsicana texas when the #CheerNetflix production team asked them if they knew about the 14 time national champion navarro college cheer team pic.twitter.com/ESNnBNkB18

Just got my boyfriend to agree to watch Cheer on Netflix. In the middle of the second episode:
Me: do you like it?!
Him: I just really need Jerry to make mat 😫😫😫😫 #CheerNetflix

TT when he had to tell monica he was hurt after monica specifically told him not to compete over the weekend because he could get hurt #CheerNetflix pic.twitter.com/ToZRZFROaH

Me trying to figure out how I can be a cheerleader now..But you’re 24 yrs old with your own family and you work and a full time student. And can’t tumble for shit #CheerNetflix pic.twitter.com/uMXPtVbh1m

39. Your future has been decided

Because of #CheerNetflix my unborn daughter will be a competitive cheerleader she pretty much doesn’t have a choice now.

• Netflix Cheer: This is what the Navarro cheerleaders are up to now

• Netflix Cheer Instagrams: These are all the Navarro cheerleaders’ Instagrams