Apparently, there is ‘no equivalence’ between the two

The Times published an article which was originally headlined "Corbyn's antisemitism is worse than Johnson's remarks about Muslims" yesterday.

The article, written by Philip Collins, a columnist at The Times has received widespread criticism online for comparing the two forms of racism and pitting two minority communities against one another.

I am sorry what the fuck? Tbf this is the Times so there is still a rolled copy of the Euston Manifesto being passed around for them to smoke pic.twitter.com/1nGpPFEtZ1

The article has been called irresponsible by journalist Rachel Shabi.

Beyond irresponsible to write a Times piece engaging in race hate rankings, deeming one prejudice more significant than the other and referring to “the Muslim question”. And all this from a “moderate” commentator, god help us all

Collins has also been criticised for using the phrase "the Muslim question" in the article.

Philip Collins in the Times here, actually typing the words "the Muslim question" and we're apparently supposed to what….let this slide? https://t.co/Cqd5lQsbtu

For those questioning whether Islamophobia is a systemic problem in the Conservative party, a recent poll found that 40 per cent of Tory members want limits on Muslims entering the UK, 43 per cent don't want a Muslim Prime Minister and 67 per cent believe that Sharia Law rules parts of the UK.

Islamophobia in the Conservative party is only "casual" and a small deal, says Philip Collins in the Times.

A poll of Tory members found:

It was only last year that the Prime Minister, Boris Johnson, made remarks about Muslim women who wear the niqab, calling them "letterboxes."

The article's headline has now been changed to "Labour's racism is worse than the Tory kind." 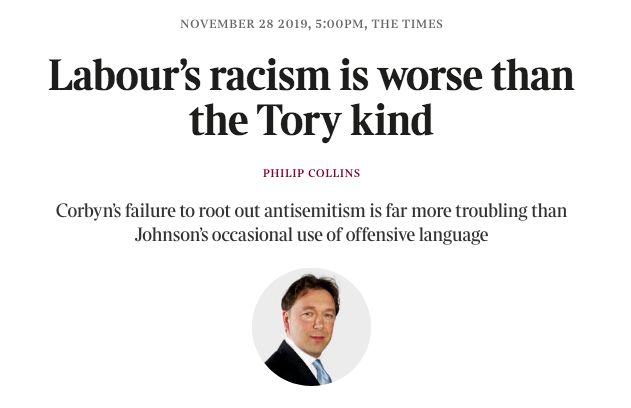 • ‘I’m fearful for my safety’: Jewish Notts students on a Corbyn government